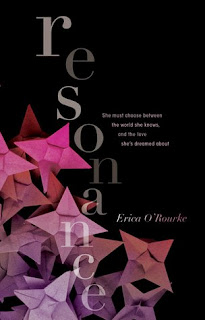 Resonance is the sequel and conclusion to Dissonance. In this series, there are Walkers, who are able to cross from Key World to other alternate worlds. Del discovers a familiar face, Simon, in the multiverse, and converses with his Echoes. In Resonance, Del finds that the Echoes of people in Key World are just as important as the people in Key World, and that cleaving the other worlds might be detrimental to everyone and everything she knows.

Today, I'm going to talk about the multiverse!

According to Merriam-Webster, the multiverse is defined as

There are many multiverse hypotheses in physics, two of which are created by Max Tegmark and Brian Greene. Tegmark wrote a book, Our Mathematical Universe, that details a number of astronomical theories. Tegmark believes there could be four levels of the multiverse, whereas Greene believes there could be nine levels. There are theories that our universe came into contact and crashed into other universes. The multiverse theories are complex and diverse, and a lot of them can be mind-boggling. Check out Wikipedia's "Multiverse" page - I know, as a student, that Wikipedia isn't very accurate, but look at the various theories presented by scientists!

Brian Greene did an interview with NPR, which I found to be very interesting. As you can see from his multiverse theory, Greene is pretty convinced that parallel universes exist. To understand the evidence to his theory, you have to under string theory, which is a concept of physics that I personally haven't studied very well. I have studied quantum mechanics a little - which Greene says is important to understand on the smaller scheme of things. Einstein's theory of relativity is important too. Here's a little background:

a theory, formulated essentially by Albert Einstein, that all motion must be defined relative to a frame of reference and that space and time are relative, rather than absolute concepts. - Dictionary.com

a theory in physics: all elementary particles are manifestations of the vibrations of one-dimensional strings. - Merriam-Webster

String theory kind of blows my mind a little bit, but Greene believes that the multiverse theory allows from the "strings" of string theory, as well as other surfaces. And when those surfaces collide, or break apart after collision, there is an exchange of energy. Measuring energy before and after collisions can prove that debris from collision is going somewhere - into surfaces ("membranes") of the multiverse.

Dense, I know. I'm summarizing, too. In Resonance, Del learns in Walker school all about cleaving worlds and the release of energy that cleaving a world provides. The Consort wants to cleave worlds because the Key World will be stabilized and sustained with so much energy. Energy is such a vague concept, but in Resonance, it's the reason why parallel universes are destroyed, and in our world, it's evidence of the multiverse.

There are a number of physicists that believe the multiverse is real, and that there are infinite universes out there. Personally, as a scientist and engineer, I'd need to see more concrete and proved evidence, but I'm open to the idea of parallel universes. At least, infinite universes. There is a lot about time and space that we don't understand - so, why wouldn't it be possible?


So, readers. What are your thoughts on the multiverse? Anyone interested in string theory, Einstein's Theory of Relativity, of quantum physics? :D
Posted by Alyssa at 12:00 AM