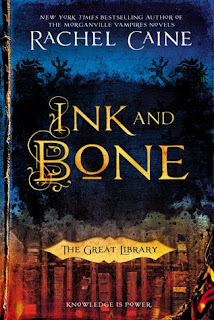 In an exhilarating new series, New York Times bestselling author Rachel Caine rewrites history, creating a dangerous world where the Great Library of Alexandria has survived the test of time.…

Ruthless and supremely powerful, the Great Library is now a presence in every major city, governing the flow of knowledge to the masses. Alchemy allows the Library to deliver the content of the greatest works of history instantly—but the personal ownership of books is expressly forbidden.

Jess Brightwell believes in the value of the Library, but the majority of his knowledge comes from illegal books obtained by his family, who are involved in the thriving black market. Jess has been sent to be his family’s spy, but his loyalties are tested in the final months of his training to enter the Library’s service.

When he inadvertently commits heresy by creating a device that could change the world, Jess discovers that those who control the Great Library believe that knowledge is more valuable than any human life—and soon both heretics and books will burn.…

My first Rachel Caine read! Isn't it pretty?! Take a look at the spine, if you have a print copy (hardcover especially) - so gorgeous! It reminds of how the spines of old books used to be. Not flashy with the book's title printed across, but very much like an old bound book's spine! Excellent work there, NAL, with the book's spine and cover! And excellent work, Caine, for writing a very intriguing novel, which I enjoyed!

Jess comes from a family of book smugglers, in a time in which it is illegal to own printed novels. Everything can be accessed from the Great Library in Alexandria, but owning books is against the law. Jess is sent by his father to the library to train with other students to get a position in the Great Librarian - but also to be a spy for his family, and get books his family to smuggle. But soon Jess realizes that much more is at stake than his family's business, and that the Great Library isn't what it seems. His loyalties will be tested in many ways, and Jess will be forced to choose a side.

This book is so OMINOUS. Right from the start, I was slightly worried for Jess. The entire book has a suspenseful and dark tone - I was always wondering when Jess would get caught, or when the next person would die, etc. I was on the edge of my seat, trying to figure out what would happen next. This book moves a bit slow, but the mood is very dark and ominous. Someone was always being killed or worried about it. Scary! Not that the book is scary. But dealing with print books and hiding who you are (a print book smuggler) would make anyone uneasy (to say the least).

This book is written in third person limited, to Jess. Jess is a very intelligent boy, who really appreciates print books. His father is very hard on him, and sends him on deliveries all the time, instead of his time brother Brendan. And then Jess's father pays to have him take the exams to receive education at the Great Library. With about twenty other students, Jess goes to Alexandria. Jess is quiet yet clever, nimble and street-smart. A jack-of-all-trades. I think I like him, though I struggled a bit to connect with him initially.

The supporting characters are one of the best and most well-written part of this book. Jess is the protagonist, but there are several other students that play critical roles in this novel. There were twenty at first, but only six spots are open. Dario, Jess's roommate in Alexandria, is a handful, but I think I like him when he was first introduced (but he's a handful). Khalila is a poised and intelligent girl. Thomas is a friendly giant with a very creative engineering mind. Glain is a cold Welsh girl. Morgan is a late arrival, mysterious and odd. Wolfe is the Scholar who is in charge of the students, and he is ruthless and a bit scary. Captain Santi keeps guard of the students and Scholar. Wolfe might be my favorite character! He's an interesting one, once you get to know him. All of these characters are. You might start out disliking one or two, but will fall for all of them by the end!

There IS romance in this book! And I love it because for about 80% of the book, the romance is pretty much not important. It doesn't really start arising until about 50% of the book, but even then, it's just there. It's not a plot-mover, it's not all-encompassing or consuming. It's sweet and I love watching Jess fall for the girl. It's a subtle romance, though you know it's coming when the characters meet. No love triangle! And to make things better, there are other pairs of characters involved in their own romances in the book as well. One made me particularly happy - one the train is when we/Jess makes the discovery (you'll know which I mean when you read the book) - I KNEW IT!

Speaking of I KNEW IT! - there was something else in this book that I had my suspicions about from the beginning - AND I WAS RIGHT! I'm very paranoid and suspicious and as soon as I read about this one thing in the book, I was like, hmmm, but couldn't they be doing this with this... and I was right! Very vague, I know, but I'm feeling triumphant. Good instincts will catch it!

The characterization is really good - Jess grows a great deal in this book. He has to choose sides and paths and decisions again and again, over and over, and he proves his intelligence and perceptiveness and maturity over and over. I personally thought he developed quite a bit as a character, and not just him. He reminded me a bit of Darrow from Pierce Brown's Red Rising.

The world-building is amazing! Caine is a painter with words - the setting and imagery and descriptions are captivating and lovely. There are many different scenery/landscapes in this book, and Caine makes each one unique in its own way. The world-building is very well-written - Caine definitely did a good job of creating this world and story! Though I can't wait to dig deeper in the next book(s).

The plot is slow. I will say that as a negative below - the story moves slowly. It's an interesting story, and I was anxious while reading (I see this as a good thing), but the plot is slow. There is plenty of scheming and deaths and betrayals and twists and true natures revealed and all kinds of shenanigans. The ending had me sad and angry and scared and wanting much, much more. In a positive way, if that makes sense.

Overall, I very much enjoyed this book! I'm looking forward to the next volume in this series - I need it! So many things to be fixed!

Like I said above, this book's pacing is slow. It took me longer than usual to read this one, and obviously it's not due to the book's length (this book is short), or genre (it's a futuristic fantasy type, which I do love). The story is very interesting and I was never bored, but it's a slow-moving book, in my opinion.

Yes! I would! Fantasy fans, contemporary fans, basically anyone who likes books... try the book about books! This book was pretty impressive, and definitely got me thinking about books in general. I could not live without my print books! Anyway, this is a Young Adult book, but it is highly suitable for adults. It almost reads like an adult book! Younger teens could read this one, the content isn't too bad (the violence is the heaviest stuff, and it's not bad).

4 stars. My first Rachel Caine book, a successful! I'm not sure I'll ever read her vampire series, but I know I'll be continuing with this one!