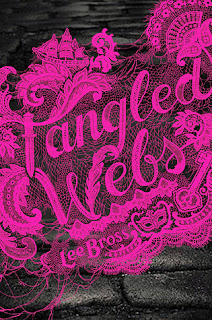 London, 1725. Everybody has a secret. Lady A will keep yours—for a price. This sumptuous, scandalous YA novel is wickedly addictive.

Lady A is the most notorious blackmailer in the city. With just a mask and a gown to disguise her, she sweeps into lavish balls and exclusive events collecting the most valuable currency in 1725 London—secrets.

But leading a double life isn't easy. By day Lady A is just a sixteen-year-old girl named Arista who lives in fear of her abusive master, Bones, and passes herself off as a boy to move safely through the squalor of London's slums. When Bones attempts to dispose of his pawn forever, Arista is rescued by the last person she expects: Jonathan Wild, the infamous Thief Taker General who moves seamlessly between the city's criminal underworld and its most elite upper circles. Arista partners with Wild on her own terms in the hopes of saving enough money to buy passage out of London.

Everything changes when she meets Graeden Sinclair, the son of a wealthy merchant. Grae has traveled the world, has seen the exotic lands Arista has longed to escape to her whole life, and he loves Arista for who she is—not for what she can do for him. Being with Grae gives something Arista something precious that she swore off long ago: hope. He has promised to help Arista escape the life of crime that has claimed her since she was a child. But can you ever truly escape the past?


When I first saw the name "Arista", I was just the slightest bit turned off. I don't like the name (though it's not TOO bad), but also, I didn't like Lady Arista from Kerstin Gier's Ruby Red trilogy very much (she's a snobby grandmother, so I don't think we're supposed to like her). But Arista from Tangled Webs turned out to be quite a fun and likable character. I enjoyed reading her story, and I sympathized and felt bad for her often. This story was a breath of fresh air, after all those three-star reads I've gone through recently!

The setting is London, 1725. Arista is secretly Lady A, a young woman who everyone knows works for Bones, a dangerous man known for his blackmailing. The highest payer will have their secrets kept by Bones. But fail to pay, and your secrets are out. Lady A ensures that secrets are found out and payments are made. This is not a comfortable life, and Arista wants to leave forever and go to India. When a night on the job goes wrong, Arista finds herself in the clutches of a new thief and blackmailer, deceptively no better than Bones. Arista has things to lose - her friend Becky, her budding relationship with Graeden Sinclair and his family... Arista is caught in a web of deceit, and there is no easy way out.

I love historical fiction! This book is heavily historical, and I enjoyed it. There were some anachronisms in terms of the speech, I believe, but I tried not to let it bother me too much (they weren't common and they were *almost* passable as common across all time periods). I didn't spot too many other anachronisms, which was nice. The historical aspect of this book was lovely! Of course, Arista's existence as Lady A is odd, but this is where we use our imagination.

I like Arista very much. She is hardened and brave, sly and clever. She isn't as devious and malicious as her Lady A reputation might imply. She wants to be free of it all, to go to India and never come back. Arista never wanted to work for Bones, or Wild. She had no choice in either matter, and it was losing her freedom all over again when she "joined" Wild. It's hard not to feel sorry for Arista, given her difficult past, present, and future. But I like how strong she is, how cool and collected yet sad and emotional-filled she is. She isn't a conscience-less thief!

By chance and terrible timing, Arista and her lady's maid/friend Becky are abandoned by Bones, and are snatched up by Wild (sort of). Arista makes a deal with Wild, to keep doing what she's doing, but for him. Arista agrees so that she and Becky will have shelter and food. Arista met Grae at a ball while doing a job, and she can't get him out of her head. Fate throws them together, and now Arista sees Grae often.

I liked Grae, though you'll see a few complaints below. I found him to be a tad one-dimensional (like I said, more below). He's a strong and kind male protagonist with a very important role to play in the story. He's the son of a merchant owning a fleet of ships, and Grae is the captain of one. Grae is several years older than Arista, and he is a lovely young man. He's definitely a swoon-worthy love interest - and the one and only love interest.

The synopsis will have you thinking that there might be some sort of love triangle, possibly with Grae and Wild being the love interests. UNTRUE. Throughout the entire book, the only love interest is Grae. Wild is another employer, another man putting Arista in a gilded cage. There is no romance there whatsoever. There is no romance anywhere except between Arista and Grae.

And I really, really liked the romance in this book. Grae and Arista meet before he meets "Arista" - he met her at a masquerade ball while she was disguised, so he didn't know she was Arista or Lady A. Things heat up between them immediately upon seeing each other - lust at first sight. I LOVED this. And then he meets her as Arista, and he's shocked and angry, but the chemistry is still very much alive. And sizzling. Seriously, for a historical fiction novel, the romance was pretty alive! I liked this a lot.

The story is exciting, thrilling, sad, and engaging. I thought it got a little predictable towards the end, but that might have just been me. Nevertheless, I liked the ending. I kind of hoped this book would be a standalone, but I see on Goodreads that it is listed as a series. Companion series? I kind of hope it's not a continuation series! This book ended perfectly, and I'd almost hate to see a sequel "ruin" it!

I mentioned above - I found Grae to be a smidgen one-dimensional. He just didn't seem real to me. I'm not sure why, but he seemed a bit flat. Almost too perfect? I liked him a lot, don't get me wrong. But I feel like I didn't get enough time to get to know him - maybe that's it?

That's another thing - time moves quickly in this book. You know that whole "one months later" or "she did this for the next three weeks" kind of thing? The author employs this tactic, which is fine, but it messes with the progression of Grae and Arista's relationship. I feel like Grae and Arista didn't get enough up-close-and-personal time (and I'm not even talking about in a romantic way - though that would have been nice too). Their relationship is well-developed (we know this because of the time lapse), but we as readers don't SEE this development, really. So it wasn't insta-love at all! More like omission of development. If that makes sense.

I liked Grae a lot and I really liked the romance. So don't get me wrong. But both could have been stretched out for readers! This book was short, so another thirty to forty pages of exposition between Grae and Arista would have not only shown the development of their relationship, but also taught us more about Grae!

Despite a few misgivings, I really enjoyed this book! It's definitely worth the read, so I would recommend it. Kickbutt heroine, sweet and steamy romance, hot male protagonist, swift action - what's not to love? And it acts well as a standalone (though I see Goodreads says it's part of a series), so theoretically, you could stop after this book and love it!


4 stars. I'm glad I liked this book! It was great, I've already reread some parts. I'm torn on how I feel about it being part of a series, but I will definitely read the sequel, no matter my feelings on this book and the series. This one ended so wonderfully, there shouldn't be a sequel! But I'll read it anyway.