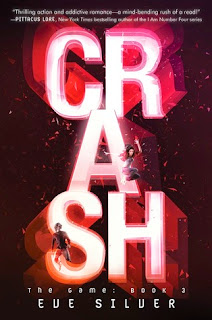 A thrilling action/suspense novel for fans of The Fifth Wave about contemporary teens pulled in and out of an alternate reality where battling aliens is more than a game—it's life and death.

Miki’s life is falling apart around her. Her dad and best friend are lying in the hospital. The Game is glitching, making missions more frequent and more deadly. And someone close to her is waiting for the right moment to betray her.

Miki feels like she’s hanging on by a thread and the only thing keeping her tethered is Jackson’s hand in hers. Yet telling him how much she needs him, how much she loves him, feels like the biggest challenge of all. And if Miki really wants the missions to end for everyone, she’ll have to let go and be ready to fight when the walls between the Game and reality come crashing down. Because if there’s one thing she’s learned, it’s that she’s got a whole lot left to lose.

Crash is the pulse-pounding conclusion to the Game trilogy fans won’t want to miss.

Guys, I'm so sad! This series is over... the Game series has become one of my favorite YA science fiction/thriller series! Rush blew me away and I liked Push, and now Crash has solidified an overall feeling of sanctification. I was highly impressed with this series - I've never read any of Silver's books before Rush, but given what I've read from this series, I'm sure the lady is quite talented! She is a very prolific writer, especially in adult novels, so I will be checking out some of those adult romance novels for sure!

In this final novel of the Game trilogy, Miki, Jackson, the team, and some unexpected allies fight to understand how to escape the game and its Committee. Miki knows something isn't right, and that the Drau may not be enemy. What if the Committee is orchestrating everything? With her father and best friend unconscious in the hospital and her getting pulled into the game more and more often, Miki's nerves are frayed. Is there any way to stop the game, to go back to her "normal" life?

This book had me on pins and needles as I was reading! There was no way to read fast enough. Miki's father is in the hospital, as well as Carly. I had no idea if either of them would survive, or if they wouldn't make it... the game has spilled into Miki's real life, and the threat is now present in all aspects of her life, including her innocent loved ones. The suspense was killing me!

Meanwhile, in terms of the game itself, we finally start to get answers about many things throughout this book. The Drau, the Committee, Lizzie, the next level(s) of the game, the bigger picture. A lot of things come together, and it's been a long time coming. I hate finishing a series and feeling like questions haven't been addressed. Not so, with Crash!

Miki remains an awesome and likable heroine. She is tough, yet she is fragile. She panics and has anxiety, and isn't always clear-headed. Yet she is willful and stubborn and determined, intelligent and can think for herself. In this book, she must rely on Jackson even more, for emotional stability as well as trust in the game.

Just like Miki, Jackson remains a kickbutt and badboy-fabulous hero. He's stubborn and macho and protective, but not in a disgustingly caveman way. He trust Miki and lets her in, and he values her opinion, game matters and non-game matters. He cares about everyone on the team, and watches everyone's back, even if he preaches "every man for himself". I like a macho guy (who's surprised? I love alphas, can't you tell from all the romance novels I read?), but I also like a sweet guy, a sensitive guy, an intelligent guy. Jackson is all of those things, even if it doesn't seem that way at first. I love that he is not a love interest first - he is a male protagonist and primary character, and THEN a love interest.

The romance is so solid and present and alive in this book, I loved it! The romance in Rush really worked, and the romance in Push was good too, but I think I liked the romance in this book the best. No love triangle throughout the entire series, and Miki and Jackson made me smile and swoon and laugh. The two of them have really fiery chemistry (Silver write romance novels too, so this makes sense), and I love how they bicker and fight with each other (not in an annoying way to readers).

The science fiction/thriller part of this book is so great! You don't find too many science fiction novels like THIS in YA. Too many of them are dystopias or medical thrillers. This series is all about aliens and a video-game-like alternate dimensions. To be fair, aliens are now popping up more and more in YA these days - but this particular combination of aliens, alternate dimensions, and thriller-like action is pretty unique. Props to Silver! I love the world she has created I love the "bigger picture" that we readers finally get in this novel. Very satisfying, in my opinion.

I won't say too much more because I don't want to spoil anything. Towards the end of this book, the story kind of blew my mind a little - it got complex and larger than life and just crazy! I'm very happy with the ending, though it is a bit of a surprising ending. I kind of like how Silver ends things - it isn't an ending anyone expects, and yet, it is an ending that fits. Trust me, the ending is great! Just surprising. Which is a good thing, you'll be surprised no matter what I say!

I don't really have any complaints! When I first finished the book, I was a bit shocked, and for a second, I was searching for a second epilogue or something. But the more I thought about it, the more the ending fit. Silver was leading us towards this particular ending, and while it wasn't the ending I expected, it was a good ending nonetheless. Be prepared for anything!

I truly loved this series, and I would recommend this book - and series! Definitely one of my favorite YA science fiction/thriller series, and definitely one I could see myself reading again. If I collected different sets of the books (ARCs, hardcovers, etc.), then that's how you KNOW I loved the series. I highly recommend this series to anyone! Pick up at least Rush if you have not yet done so!

4 stars. This was an excellent conclusion novel! The series was very intriguing, engrossing, satisfying. I love Silver's worldbuilding, character development, storytelling, romance. The romance especially. There are so many ways to fall in love with this series!