Science in Fiction (#4): The Cage by Megan Shepherd

This month, I'm featuring The Cage by Megan Shepherd! 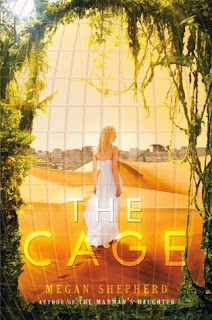 ***NOTE: There may be spoilers. If you have not read The Cage, be aware that there are some key ideas from this post that can seem spoiler-y. Sorry to everyone!***


This is Megan Shepherd's fourth published novel, the first one of a new series. You can check out my reviews of The Madman's Daughter, Her Dark Curiosity, and A Cold Legacy! In this novel, Cora and five other teens are taken from their homes and plopped into a cage-like habitat... and they have no recollection of getting there. As it would turn out, Cora and the other teens were taken from Earth by aliens (who look like humans, but with huge differences in appearance). The purpose for taking the humans? Super sinister.

READ ON ONLY IF YOU DON'T MIND SPOILERS.

Today, I'm going to talk about natural selection and evolution!

(In a very general sense.)

Regardless of your beliefs, it's pretty obvious that every species has evolved somehow. I'm not necessarily saying that a rabbit evolved from a worm or something (not trying to step on anyone's toes), but I am saying that species adapt to changing conditions and in time in general. I know that the topics of natural selection and evolution can start wars, but I want to relate this concepts very generally to The Cage.

Human evolution has been well studied. We can see evidence of adaptations and evolution within the Homo sapiens species through geologic time. The Smithsonian National Museum of Natural History (which I just visited two months ago) has a really interesting hall on human evolution, called Human Origins. Check out skull shapes and other fossils, it would definitely seem like we have evolved some since "cavemen"!

National Geographic wrote an article about RECENT human evolution. Yes, humans are still evolving! The human genome is changing. This depends on region, climate, and even culture. But humans are evolving to have slightly different bone structure, metabolism, and other small changes that we might not be able to physically see - but maybe hundreds or thousands of years from now, our descendants will!

What does this have to do with The Cage? Here's where it gets kind of spoiler-y?

The aliens take the six teenagers because of their TRAITS. Cora is innocent and kind, Rolf is intelligent, Nok is beautiful, Lucky is... fearless and alpha-y (I can't remember specifically what his desired trait was), Leon is the epitome of perfect human musculature and fitness (apparently), and the sixth human, a girl, you'll have to read to find out about her.

The aliens chose these humans specifically because they have traits that would be successful in the next generation of humans... their offspring. Between the six of them. Three males, three females, and each of them has a strong amount of a certain trait that makes them valuable as well as necessary to the aliens. The aliens want the humans to procreate with each other, to produce a more superior generation of humans.

This is basically forcing natural selection. Natural selection is the process in which organisms adapt to conditions such as environment in order to better survive. The aliens are pushing the six humans to procreate, with hopes that the combination of traits will produce stronger traits in the offspring. In this way, the humans are to be evolving into a generation of more superior humans.

Creepy, no? Imagine if you were chosen for some trait, and told to mate with someone who also has a strong trait, in order to bear superior offspring. For which trait do you think you would be chosen? Would you go along with this scheme (I mean, in this book, they have pretty much no choice - start procreating in 21 days or else)?

Despite the overwhelming population of humans on Earth (seriously, we are WAY over the carrying capacity), I think procreation should be between two willing individuals. The human race will survive and evolve as it is!
Posted by Alyssa at 12:00 AM