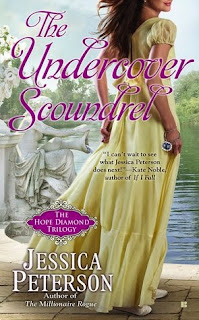 The author of The Millionaire Rogue returns to her dazzling series about a bygone era filled with romance, espionage, and one dangerously seductive diamond…

Mr. Henry Lake spent the past twelve years uncovering the most scandalous secrets of Europe’s wealthy and powerful, serving as one of His Majesty’s most decorated spies. But when a mission to find the legendary French Blue diamond brings him back to London, and face to face with a beautiful noblewoman he once loved, it’s his own hidden passions that are uncovered…

Lady Caroline, dowager Duchess of Berry, knows better than to lose her head over a man. After an embarrassing romantic entanglement forced her into a loveless marriage and early widowhood, she learned to never trust in desire, especially when it comes to the man who once broke her heart. Only, despite her good sense, she finds Henry impossible to resist—even when he once again places her in deathly danger…

Ah! I've been meaning to post this review for a while now. Finals and studying and time and whatnot got away from me, and this book and review were a bit pushed to the side (as were many others). Moving forward! I have an obligation to the author as well as a desire to read this book, if only to find out what happens to the French Blue!

In this novel, Henry Lake continues his search for the French Blue with Thomas Hope. His search leads him back to London, a place he left twelve years ago. Twelve years ago, the morning after his secret wedding and wedding night, he disappeared, without his new wife ever knowing why. Caroline Osbourne remarried after Lake disappeared, unwillingly, but for good reason. Now a widow, Caroline guards her against Lake and his return. But the two of them fall for each other all over again. When a choice arises, Lake must decide - the French Blue, or Caroline.

Henry is very loyal and brave, courageous and stubborn. He's an excellent spy, and very intelligent. If anyone can track down the French Blue, it would be him. Henry lost one of his eyes, as well as injured his leg, in his service to England, showing his dedication to his job. I know he is just as dedicated to his remarried-while-he-disappeared wife, because he stayed away for so long...

Caroline, eh. See why I didn't really connect with her below. It was difficult, even though logically, I know I probably would have felt like she did in her situation at this point in history. We KNOW why Henry left her (well, not entirely, but we know it's for noble reasons and that he never stopped caring about her). And because we know, and Caroline doesn't, it's not necessarily her fault that she has hardened her heart against him for all these years. But still. It was difficult to connect with her.

I like the story! Yet again, the mystery of this book had me enthralled. There are a lot of conflicts going on at once, starting with an ambush at a ballroom and the jewel being stolen, to death threats and duels and kidnappings and ransom. This book is full of action, which is a bit different from your average historical romance novel! It's not solely focused on the romance.

The romance is... enjoyable, but not amazing. It's interesting to see romance from this angle - the couple was together for one night (which we get in the prologue), and then they don't see each other for twelve years. It's definitely fulfilling to see these two fall in love again, but given that I slightly resented Caroline, I wasn't entirely invested in the romance, though I knew the couple would end up together. The chemistry between the two sizzles, just as it did twelve years ago. I think I was more on board with both the story and the romance AFTER Caroline finds out why Henry left her (which she does, we all know it's bound to happen).

Overall, I think this was an okay end to the series! The French Blue plot wraps up a little too perfectly, and the ending in general is way too perfect, but I guess that makes it a positive, happily-ever-after ending, which readers will love.

Like I said above, I found it hard to connect with Caroline. I understand that in her position - a recently married and jilted wife - she would have to remarry and whatnot. But two months later? Even given certain circumstances and the historic time period... it's not terrible to say no. It's not the end of the world to wait, or hope. It's not the worst thing in the world to believe in love. It just proved to me that Caroline is useless and needs a man to take care of her. Which, in these times, were mostly true, but it still didn't make it any easier for me to connect with her.

So I didn't really connect with her. I started to "like" her more after she found out about why Henry left her, but even though, I was pretty much already solidly disliking her. I wish I could empathize with her more, but it was hard to do so. Her position does not make her likable to readers, though it is a position in which we might all understand (maybe). She didn't wait for Henry, and she didn't trust him when he came back to London. Theoretically I'd feel the same way but... it doesn't make me like her any more than I do.

Another thing that bothered me was how perfect the ending was. I expected at least somehow to die! Especially given the violence and whatnot at the end of the book. No one died. Everything wrapped up so perfectly. Henry, Caroline, the French Blue... things were too tidy, too coincidental, too perfectly orchestrated. It's fine, but it's too sugary sweet, you know? I like a HEA as much as the next person, but that doesn't mean I like a HEA with heaven in my back pocket and a rainbow over my head. Things were just TOO great. Weird dislike, but one nonetheless.

Also, there was little closure with the other two pairs from the series. I haven't read the first book, The Gentleman Jewel Thief, but I've read The Millionaire Rogue. Unless I'm mistaken, the three books run parallel to each other? Meaning, they occur at the same time? So I guess we wouldn't get closure on any of the characters because each of their stories end at the same time? I'm not really sure but that was confusing.

This series is an okay historical romance series! Mostly, I like it for the action and historic parallels, and then the romance part. These books are very fast-paced, high stakes type of novels, and I really enjoy reading to discover more about each book's mystery and plot of the series. The romance in THIS book wasn't amazing, but the romance in The Millionaire Rogue was lovely. If you're looking for a romance novel with more than just romance, this is definitely a series for you! I need to go and read The Gentleman Jewel Thief though - William is an... intriguing guy.

3.5 stars. I'm rounding up to 4 stars but it's a solid 3.5 stars from me. I'm sure I'll be looking out for more of Peterson's books in the future! Curious how this series is only a trilogy - most historical romance series are companion series that are as long as can be! Which I don't mind. In any case, I suppose we will have a fresh new series from Peterson at some point! I await that series. And a big thanks to her for second me this book! That in no way affected my opinion (as you can probably tell, I'm always overly honest).