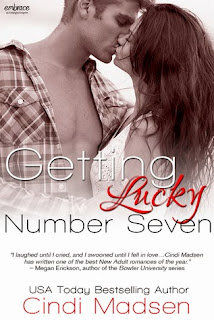 Lyla Wilder is done being the shy, chemistry nerd extraordinaire. While every other college student is out having fun, Lyla is studying. With her cat. Well, she's played it "safe" quite enough, thank you. So she creates a "College Bucket List"?with item #7 being a night of uninhibited, mind-blowing sex...

But she needs some help from her man-whore best friend.

Hockey player Beck Davenport thought Lyla's transformation would be subtle. Man, was he wrong. With every item she ticks off, Beck finds himself growing seriously hot for his sweet, brainiac best friend. And if he's not careful, he'll end up risking their friendship in order to convince Lyla that he might just be her lucky #7...

This review might start to get less review-ish and more personal. We can blame Cindi, it's her fault for writing a book that pretty much parallels the current state of my personal life - to a point. For about half of this book. But in any case, this one hit close to home. I almost stopped reading at one point because it was too much like my own life. Then the halfway point hit and things were radically different and I kept reading because the similarities disappeared and my heart could handle this book.

Lyla is tired of being the boring smart nerd who studies all the time (girl, I feel you. This so much). After a disastrous time of embarrassing herself and someone making her feel bad about herself, Lyla decides to make a list of things that she wants to do - things like doing a keg stand, dancing on a bar, getting a tattoo. Wild things that she would never do without a little nudge. That nudge comes from her friend, Beck. He's a hot, smart hockey player who always has a string of girls in and out of his apartment. Who better to help her get out from under her nerd rock? But both of them will realize that that have real feelings for each other that have nothing to do with friendship.

Lyla is going all in for this list. She's a chemistry major. a corny, awkward girl who is officially frustrated with herself - is she not fun? Or attractive? Lyla dyes her hair, ditches the long skirts and colorful shirts, attempts to learn to flirt. She lets herself drink a little, loosen up. I'm definitely a "Lyla" - I'm a conservative dresser, I don't drink, I'm an engineering major who takes things way too seriously, I've taken up a second residence in the library. I can't say I'm terribly awkward or embarrassing but... I don't know if people would agree or disagree. Wink.

Beck is quite an interesting guy. He's hot, he's charming, he's easygoing. Everyone likes him (me included). He plays hockey, and he loves it, but he's not sure if that's a career path for him, though he can't see himself doing anything else, despite the chemistry major. Beck is a lot like my gilipollas boy I always mention (he's a soccer player though) - they are carbon copies.

So this story was extremely realistic for me. In fact, up until about halfway through the book, it was my life. My gilipollas boy and I are no longer best friends, but we used to be best friend. The nerdy environmental engineer girl and the soccer player boy, best friends, the strangest pairing, really. He would always be pushing me to be more fun, take more risks, do this and that. I'd always be pushing him to study more. Ha. The difference between Lyla and Beck, and me and my gilipollas boy is him and I are no longer friends. Or anything. There will be no happy ending for us. Midway through this book, it's clear that Lyla and Beck have feelings for each other, or at least serious lust.

And then their relationship takes a turn that my and his never did, and that was when this book got easier for me to read. Not that it was HARD to read before - just, too personal. Too close to home, too fresh. But after Lyla and Beck does some surprising things on her list, I started really seeing this as a story very separate from my life.

Don't get me wrong, I really liked this story. It was so fun to see Lyla transform and slowly fall for Beck, and for Beck to open his eyes to what is in front of him. Neither of them really had feelings for each other before the bucket list of Lyla's. So it was nice to see them fall for each other, from best friends to more, at pretty much an even pace. I always believe that the best relationships start from friendship to relationship (dating, whatever).

It's interesting to see the relationship grow and develop. They don't go from friends to boyfriend/girlfriend. There's this modern-day in-between, in which people aren't dating but they're more than friends - historic times would call them "lovers", I guess we call it hooking up? The person you're hooking up with? Exclusively? I'm in college and I see this all the time and it still baffles me what I should call this relationship. But everyone hates labels these days. In any case, while I dislike this type of relationship, Madsen doesn't an EXCELLENT job of capturing it. Until Lyla and Beck outgrow that relationship! And then it turns into something lovely.

The romance is quite steamy! It takes a while to get there, but when it does, be prepared to fan yourself! Nothing on the level of some historical romance novels, or this book's sister imprint, Entangled Brazen, but still, quite steamy.

There is a great deal of character development in both protagonists! Oh yes, we get both of their first person points-of-view. Lyla changes a lot, physically and mentally and emotionally. Beck has to grow up in terms of his family. He has to make a lot of difficult decisions, and I liked seeing him stand up and be decisive.

Overall, this book was very authentic (college definitely has most/all of the elements in this book these days), very funny (gosh, Lyla is awkward/embarrassing), and very hot (yay chemistry... on several levels). I don't usually like New Adult contemporary romance novels, but this one hit me personally (up until a point), and it was quite enjoyable!

One thing that bothered me was Lyla's need to feel like she needed to accomplish things and change herself? I'm just like Lyla in many ways but I have no desire to do a keg stand of dance on bars. But Lyla learned a lot about herself and gained confidence as she went - I don't think I need to much help with confidence (and I wouldn't do those things to gain confidence, thank you very much). But I'm not sure how I feel about that the fact that she felt like she had to change her appearance! What's wrong with conservative dressing? Oh - unless you're trying to attractive the attention of boys (which she was) - then she decided to strip way down. Le sigh. Anyway.

I would! I liked this book a lot. It's New Adult contemporary romance, and I know there are a lot of NA fans, so this one is right up your alley. And for those of you who are like me and DON'T enjoy NA - this one is STILL up your alley! Or maybe I enjoyed it so much because I could relate so much, on many different levels. Eh.

4 stars. I'm glad I threw out my reading schedule for this one (notice it's a book I bought, not a review book, and it's post-published). I should have been reading a review book, but oh well! This one was enjoyable, and definitely the light romance I needed to read!