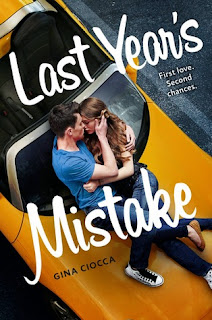 Is there anything that electric chemistry can't overcome? The past may be gone, but love has a way of holding on in this romantic debut novel told in alternating Before and After chapters.

The summer before freshman year, Kelsey and David became inseparable best friends - until the night a misunderstanding turned Kelsey into the school joke and everything around her crumbled, including her friendship with David. So when Kelsey's parents decide to move away, she can't wait to start over and leave the past behind. But David's not quite ready to be left.

Now it's senior year and Kelsey has a new group of friends, genuine popularity, and a hot boyfriend. Her life is perfect. That is, until David's family moves to town. Old feelings bubble to the surface and threaten to destroy Kelsey's second chance at happiness. The more time she spends with David, the more she realizes she never let him go. And maybe she never wants to...

I know what you all are thinking. Literally my last four reads have been contemporary, and all four of them were three-star reads. I'm doing a week of YA contemporary reads - starting with Nowhere But Here by Katie McGarry, The Summer of Chasing Mermaids by Sarah Ockler, The Devil You Know by Trish Doller, Last Year's Mistake by Gina Ciocca, and finally, P.S. I Still Love You by Jenny Han.I don't enjoy YA contemporary, so this was a mini challenge for myself. I'm totally rocking my challenge, but not liking these books very much!

This novel is told in alternating chapters of past and present. Kelsey and David were once inseparable, best friends, platonic relationship. Then Kelsey moved with her family, and things went downhill with David just before they moved. Now in a new place, Kelsey is living a different life without David. But when David shows up in her life again, things change. David moves into town and Kelsey can't stop thinking about what could have been.

I have been looking forward to reading this book for over a year now! I'm not at all a contemporary fan (unless it's adult contemporary romance), but I wanted to give this book a shot. It sounds love-triangle-y, and I knew this from the start, but I had high hopes for this book. I could say I was a bit disappointed in some ways, but at the same time, I'm really glad I read this one.

I liked how this book was told. Every other chapter alternated between past and present. If you didn't pick up on this (how could you know, the time is clearly marked at the beginning of each chapter), then you'd be a bit confused. But I like how it was two stories being told at the same time. We discover the past as we discover the present. Ciocca does a really great job of paralleling both stories, including parts of the past that correspond and coincide with parts of the present.

I think I liked the characters, though I'm not sure I fully connected with Kelsey (more on that later). I liked reading about her relationship (past and present) with David. The two of them make an interesting pair, and have such a nice but sad history. Their present relationship, for a lot of this book, was really heartbreaking!

Also - yay for a positive sister-sister relationship! Miranda is years younger than Kelsey, in her first year of high school, but it's obvious that they have a great relationship. Love!


I liked the ending of this book! It wrapped up way too quickly (she makes a decision within the last couple of pages), but it's a good ending. I feel like Kelsey doesn't actually learn and grow until this very point, when she makes a decision to go back and find the boy. Character development is slow in this book, but everything, in the end, ends well! On to dislikes.

I haven't mentioned the romance yet. Here it is: yes, there is a sort of love triangle in this book. Meaning, Kelsey has a current boyfriend who she really cares about, but she's been in love with David since they were young. When he shows up again, she remembers that she loves him, and pretty much falls for him all over again.

The thing that really bothered me about this love triangle was kind of how the triangle was "taken care of". Why does one boy have to be a terrible person, or do terrible things? Why is that the deciding factor, the last straw? Is that how love triangles work in real life - a girl loves two boys but then one of them screws up so that automatically means she goes and chooses the other boy? I'm not saying Kelsey loved both of them - but she only went to one over the other after she finds out about something important that one boy did. Huh.

That type of resolution just seems so cliche, especially when it comes to resolving love triangles.

I mentioned that Kelsey's character development doesn't really feel complete until the very end, when she makes a decision with one boy. This book moves at a very slow pace. The story is slow, the dual plots are slow, the romance is ridiculously slow. Despite the fact that the cover is very steamy, the romance is not. The character development is slow, and I feel like Kelsey doesn't really grow up until the last few pages. If she grows up at all. Does she? I don't like A LOT of her decisions in this book. But I won't spoil anything (hopefully I've kept things vague) so I won't say anymore!

Also, point of confusion - I'm still confused as to why David moved to Kelsey's "new" town. And then he's moving again... why are they moving so much? I'm not sure I understood this.

In any case, I was a little disappointed in this book because I think I wanted a steamier romance and less of a love triangle, but I'm glad I gave this book a shot!

Despite all that, I'd recommend this book, even to love triangle haters like myself! It was a decent YA contemporary novel, not too bogged down by the past and angst and issues. I'll definitely be looking out for more of Ciocca's books, despite not loving this one (like I had hoped).