Welcome to the blog tour for Burn by Walter Jury & Sarah Fine! I know all of your are probably sick of all my blog tours this week (there were at least four!), but hey, they are all great opportunities to win something! Check out why YOU should read Scan (book one of this duology), and enter to win a signed set of the books!

You can read my fangirl-y review of Scan HERE!

5. Scan is book one of a duology. Okay, why is this a good thing? If you're like me, you're probably tired of so many trilogies and waiting and cliffhangers and really, waiting? Scan and Burn make up a duology! And Burn is published! So... no waiting necessary!

4. It's a science-fiction-thriller. Or some combination of the two. I personally LOVE science fiction, and thrillers, and I really enjoyed how Jury and Fine mixed the two. These two genres make for a very EXCITING book! Even if you don't like either genre, it's totally fine! The science isn't overwhelming. It's a very *smart* book though. Seriously, there was some awesome science-y things in this book. Get ready to be acquainted with things like hydrogen peroxide and flaming tennis balls!

3. Tate, the protagonist, is an easy guy to love. Yep, these books are told from the point-of-view of a male! And total-package kind of guy too. Very intelligent, athletic, cautious, brave, loyal... I may or may not have a tiny crush on him.

2. There is romance in these books and it is sooo sweet. It's one of those romances that are already a thing before the book begins! Which really works in Scan (and Burn too, I imagine). Tate and Christina are a lovely couple, and hey, no love triangle! The two of them have a lot to deal with, especially at one point, but I love how they work things out and keep fighting for each other. And did I mention no triangle?

1. ... It's Sarah Fine. I know this seems like a cop-out reason but come on. This woman is an AMAZING storyteller. Walter Jury is fabulous himself but of his books, I've only read Scan. But from Sarah? I've read Sanctum, Fractured, Chaos, Of Metal and Wishes, Scan. And I have Marked, Claimed, and hopefully soon, Of Dreams and Rust and Burn. Sarah has a lot of books published but the thing is, all of them are GREAT. I've yet to rate any of the five books of hers I've read lower than four stars. That's pretty amazing, on her part! Never stop writing, Sarah :) 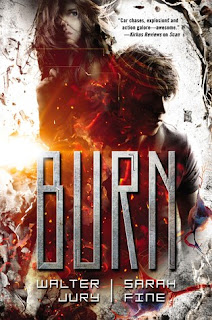 A riveting, fast-paced "we are not alone" adventure, Burn thrills to the very end. 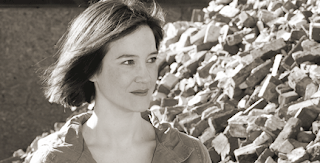 Sarah Fine is the author of several books for teens, including Of Metal and Wishes and its sequel, Of Dreams and Rust, and the Guards of the Shadowlands YA urban fantasy series. She is also the co-author (with Walter Jury) of two YA sci-fi thrillers: Scan and its sequel Burn. Sarah is also the author of the adult urban fantasy series, Servants of Fate, with the third book in the series, Fated, releasing September 2015. When Sarah’s not writing, she’s psychologizing. Sometimes she does both at the same time. The results are unpredictable.