Review: The Beautiful One by Emily Greenwood 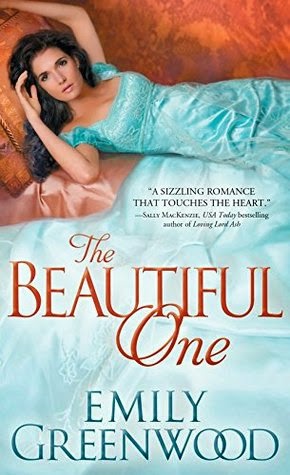 Tomboy Anna Black has no idea how a book containing nude drawings of her is traveling around town. Everyone’s calling the woman in the drawings the “Beautiful One,” but Anna knows that if her true identity is revealed, she’ll be ruined. To escape scandal, she becomes a temporary companion to the outrageous teenage ward of Will Halifax, Viscount Grandville.

Will wants nothing but to be left alone. When cheeky Anna unexpectedly arrives with his scandalous ward, suddenly he has two intolerable women filling up his once-quiet manor. But as Anna’s charms begin to soften Will’s hard exterior and uncover his shrouded heart, she hopes that love can fully blossom before her scandal erupts…

Anna has been caught in a bit of a scandal, and she flees when she realizes that the scandal is catching up with her. Someone has been drawing her, naked, as she bathes. Anna wants no part of the scandal, so she agrees to escort Miss Elizabeth Tarryton Stillwell Hall, where Elizabeth's guardian resides. But Viscount Grandville wants no one to bother him as he continues to grieve (his wife died over a year ago). But Anna is persistent and refuses to let Will send Lizzie away. It's not long before attraction swirls between Will and Anna, but Anna doesn't want him to know about her being "The Beautiful One" - until it's too late.

This one was an enjoyable read. I don't know if I'd read it again or recommend it to anyone, but I liked the book. The romance is sweet, if a little insta-love-y. The protagonists certainly fell in lust and love pretty quickly, which annoyed me (see below). But I liked Anna and Will together, so I just enjoyed the romance when there were interactions between them.

I liked Anna - she's not a lady of royal or gentle birth, though she is a lady nonetheless. Her upbringing is a little unconventional - her father was a widow and never remarried, and her brother was her companion. Anna is intelligent and well-educated, but not entirely ladylike at times, though she has good manners. She is very blunt and honest, and I definitely liked that about her.

I really liked Will. He's a bit of an ogre at first, as all he wants it to be left alone. Come to think of it, this story and its protagonists reminded me of Elizabeth Boyle's The Viscount Who Lived Down the Lane. Will is very surly and almost rude, and doesn't want Elizabeth to live with him. Really, it's because he's still grieving, still recluse, and doesn't think it's suitable for anyone to live with him. But Will is quite thoughtful and a little wicked even.

The romance is what kept me reading. The other plot - the one with a marquess trying to find "The Beautiful One", didn't really interest me. The ending of this book is exactly as you would expect it, which is fine, but somewhat predictable. Nevertheless, I enjoyed the book!

Even for a historical romance novel, the fall-in-lust and fall-in-love aspects happened fairly quickly. Will sees a soaked woman trying to get a carriage out of a ditch and is immediately attracted to her? It just seemed very odd and very sudden. I think the timing was a bit rushed, especially given the circumstances (rain storm? He and Anna barely interacted and then he can't stop thinking about her? Hmmm). I know people think historical romance novels have a lot of insta-love, but that's actually not the case. Most authors take care to have their characters fall in love slowly and surely. It's one of the things that really attracts me to these novels!

I feel like there was a whole layer to this book that was missing. I don't know how to describe this feeling, but it was like this story was very much on the surface. Something was missing. I couldn't really put my finger on it, but throughout the book, I was thinking, is that all you've got? Is that all there is? It's clear that Greenwood is a slowly rising author in the genre - she's not quite as artful and knowledgeable in the ways of writing these novels, it seems. I actually really enjoyed her novel Gentlemen Prefer Mischief, but this novel was not anywhere near the quality of that book. I'm surprised the books are by the same author!

I didn't connect with Lizzie at all. This book is written in third person, but we get Anna's, Will's, and Lizzie's perspectives throughout the book. I didn't like her from the start, and I can't say I like her now that I'm finished the book. Lizzie is snobby and stuck-up, and her character development is staggered at some times, and rushed at others. Towards the end of the book, it's like all of a sudden a light switch is flipped and Lizzie is a different person. I never connected with Lizzie, despite having her perspective.

The writing and the language is so modern. This isn't a good thing, because the quality and authenticity of this HISTORICAL fiction novel was quite lessened. Sometimes the language was so modern and pedestrian, I was shocked. But then at other times, the author did a good job of keeping the language to its time. Again, rising author. Not established.

In any case, this book was okay, but I don't know if I'll be reading any more of the books in the series.

Ehhh, probably not. I like supporting rising historical romance authors, and I love finding new ones. This book is the second one I've read by Greenwood, but it is easily the less flattering of the two. I do recommend Gentlemen Prefer Mischief though!

2.5 stars -> rounded up to 3 stars. These "meh" reviews are so hard to write! Basically, just pass this one. Try something by Elizabeth Hoyt, Tessa Dare, Caroline Linden, or Julie Anne Long!