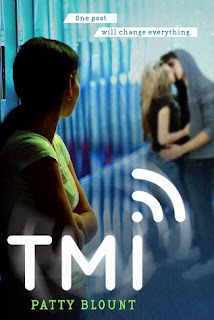 Best friends don’t ditch you for a guy.

But one stupid little secret posted online turns into a friendship-destroying feud to answer the question:

Who is Ryder West?

I actually got the chance to beta-read this one back in December of 2012! In fact, if you look in the back of the book to the acknowledgments, @Alyssa_Susanna is there! That's me. So, I'd like to thank Mrs. Blount for allowing me to have the opportunity to beta-read for her, and for putting me in the acknowledgements of her book, and for sending me a review copy!

Before I really start my review, let me say that the cover is slightly misleading. Readers will probably think, so there's two girls and guy and a LOVE TRIANGLE?! No no no! There is no love triangle! In fact, I'm not even sure who's kissing who, and why there is a girl looking on. Maybe it's Meg and Chase, with Bailey looking on? But that wouldn't make sense, because Meg and Chase are known for their relationship until the end. It could be Bailey and Simon, but they broke up. It could be Bailey and Ryder, but they never kiss! So, I'm not really sure about the angle of the cover. Just ignore the cover.

When I first read this book, my feelings couldn't really be summed up. This book had me on a roller coaster of emotions, and when it ended, I didn't know what to think! Bailey, Meg, Bailey, Meg, back and forth with their shenanigans. As a teenage girl, I did my best to understand their motives and their thoughts. But Mrs. Blount has created two very unique protagonists - both very different in personality.

This book includes the perspectives of both girls. Sometimes we read Bailey's, sometimes we read Meg's. I thought it would be really cool if we could read Chase's as well, but I see why Mrs. Blount included only Meg's and Bailey's perspectives (though both are in third person). Meg is careful, calculating, and always planning. Bailey wears her emotions on her sleeve, does what she wants when she wants, and doesn't like Meg's nagging.

Bailey has a plan to get Meg closer to Chase, the guy that Meg likes but doesn't want to admit. Chase has always been in love with Meg, since they were kids. But Bailey's plan gets out of hand when Bailey herself "meets" Ryder West - online. Meg thinks that Bailey is with Chase, but when she hears about Ryder, she gets angry. For Meg, dating someone online, whom you've never met before, is dangerous.

In this book, it proves to be dangerous, but in a different way than is expected. Things get crazy between Meg and Bailey, all starting with one text to Ryder that was never actually sent, one Facebook post in retaliation of that text that was never sent, and a confusion of boys and feelings.

What I really, really liked about this book is the message behind it - the dangers of the internet and online presence. What Mrs. Blount is trying to to convey is that people should be careful about what they post online - especially teenagers. In this day and age, we post comments and statuses and tweets and reviews and EVERYTHING without a care. But everything is public, and once it's posted, it's there forever. Bailey thought Meg sent a text to Ryder about something personal and embarrassing. But Meg never sent that text. Yet Bailey lashed out and posted something embarrassing and personal about Meg on Facebook. For EVERYONE to see.

There are so many things wrong with that - and I'm glad Mrs. Blount chose to include that backlash in the novel. Meg NEVER sent the text, but Bailey didn't believe her. Bailey decides to be petty and post something even more embarrassing on Facebook. Meg hits back and posts something embarrassing about Bailey on Facebook. What's wrong with that is that the girls used Facebook in the wrong way - to humiliate each other.

What's even worse is that none of it would have happened if Bailey hadn't started to talk to and obsess over and trust a boy online that she never met in person. I know people meet people online and swap contact information and hang out, but Mrs. Blount's message about that is clear: be careful around people you've never actually met. A person can be anyone online, someone so different from who they actually are. In Ryder's case, he was someone different.

So, yeah. I really enjoyed this book, for the messages behind it. I think teenagers and parents should pay attention to how much internet access and freedom they give themselves - because the internet really is a fun yet dangerous place for young, innocent people.

So, the romance *seems* confusing, but it's not. Bailey doesn't want Chase, she wants Ryder. Bailey recently broke up with her ex-boyfriend Simon, who Meg saw with Caitlyn. THAT was a whole mess as well. Chase doesn't want Bailey. He wants Meg. Meg doesn't want Ryder. She wants Chase. It's simple, but it takes the entire book for the romance to be sorted out. But, everything DOES get sorted out, and the ending in terms of the romance is great!

The ending in general is pretty awesome. Chase gets something that he wanted, related to his parents and his future. Meg and Bailey work to repair their friendship. And Bailey discovers something huge about her father - the father she never knew. Everything isn't what it sounds like, but I promise the ending is a good ending, for mostly everyone.

When I beta-read this one, one thing I couldn't stand was the bickering and crazies and shenanigans between Meg and Bailey. I think this "dislike" still stands, but I totally see why it's necessary. Without it, this book wouldn't be much, and Mrs. Blount wouldn't have an important message to send to readers. And I think Mrs. Blount did some excellent changes from the manuscript I read to the ARC, in terms of Meg and Bailey's rocky relationship.

But I think that a lot of readers might get turned off by all of the bickering, which is why I'm mentioning it in this section. DON'T. Keep reading! The message of this book is so important, and is one of the reasons why I love this book.

Also, this is nothing towards the content of the book, but like I said before, I don't really understand the cover. It's nice, but it doesn't make sense with the book. But, whatever!

YES! Just. Keep. Reading. This book is one of those books that are important for people my age (teenagers) to read. The internet is no place to mess up, people! Patty Blount does an excellent job of showcasing the downsides of the internet, but she does it in an engaging an interesting way.

4 stars. I am really, really happy that I got the opportunity to read this one twice! I encourage all your readers and internet aficionados to read Mrs. Blount's novels!