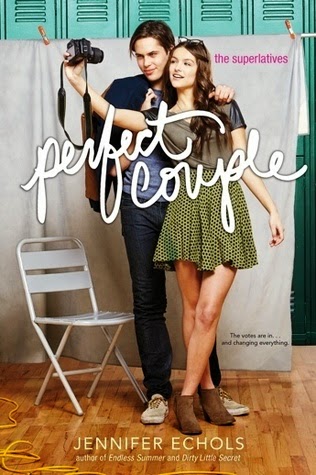 In this second book in The Superlatives trilogy from Endless Summer author Jennifer Echols, Harper and Brody think they’re an unlikely match—but the senior class says they belong together.

As yearbook photographer, Harper is responsible for those candid moments that make high school memorable. But her own life is anything but picture perfect. Her parents’ bitter divorce left her wondering what a loving relationship looks like. And ever since the senior class voted her and star quarterback Brody “Perfect Couple That Never Was,” her friends have been pushing her to ask Brody out.

Brody doesn't lack female admirers, but Harper can't see herself with him. He’s confused about the match too. Yet they find themselves drawn together—first by curiosity about why the class paired them, then by an undeniable bond.

The trouble is, though they’re attracted to each other, they have a hard time getting along or even communicating well. If they’re the perfect couple, this shouldn't be so difficult! Soon it becomes clear their class was wrong, and they throw in the towel. But they feel so changed from making the effort, they can’t forget each other. What if this match made in hell is the perfect couple after all?

I’m not a huge fan of contemporary/realistic fiction novels, but I have always enjoyed Jennifer Echols’ books. I loved Such a Rush and Biggest Flirts, and enjoyed Dirty Little Secret. Add this one to the list – this might be my favorite of her books yet!

In Biggest Flirts, we meet Tia and Will, as well as Kaye, Harper, Sawyer, and the rest of the crew. Harper is a good girl, the school yearbook photographer, who never breaks the rules. She’s dating Kennedy, the yearbook editor, who is honestly a pain in the butt. He’s annoying and self-centered and pretentious, but not in a jock way, but in a nerd way. When Harper and Brody Larson, the school’s quarterback and local heartbreaker, get paired together as the Perfect Couple That Never Was, Harper realizes that what was once a crush might be something more… except she’s got a boyfriend, and Brody has Grace. But that might not stop this couple, far from perfect as they might seem.

I can’t remember Harper much, from Biggest Flirts, but I really, really like her in this novel. She’s quiet, definitely a bit passive, avoids conflict, and doesn’t like confrontation. She’s a pensive photographer, a genuine person. I can really relate to her. I’m not passive and I’m not a photographer, but I hate conflict and confrontation and I revel in the beauty of stillness and captured beauty. Poet souls, I like to say. But anyway, I like Harper, I feel for her, and I can relate to her situation.

Brody is a wonderful male protagonist. He’s the quarterback of the football team, he’s good at what he does, he’s hot, he’s got a hot girl and a string of broken hearts behind him… he seems like your typical heartbreaking, sexy jock, but he’s also really sweet and attentive, when he wants to be.

Okay. So. One of the huge reasons why I loved this book? Harper is a lot like me… and Brody is a lot like This Guy… and my personal (romantic) life parallels that of this book, a lot. Mine’s a sexy soccer player though. But. Same deal. Quiet, smart girl falls for popular, hot, athletic, player jock. It seems hopeless for the girl, until the jock shows her some attention, and then she can’t get enough. Harper doesn't always believe that she is good enough to be with Brody, that he wants to be with her. I like this portrayal of self-doubt. I feel the same self-doubt, though I shouldn't.

Difference is, Harper got her happy ending. Me… currently not happy. Or ending. It’s like a never-ending cycle of hurt. But that’s a story for another day. I’ll do a post at the end of the year – I NEED to write a post about it.

So anyway. I really enjoyed the romance in this book. Harper had a crush on Brody before the superlatives, but Brody slowly falls for her, and she really fell for him, for real. I love watching her slowly trust herself with him, and him slowly go after her. Very well-written, in my opinion.

For most of the book, both of them are with their respective significant others (sort of). Harper and Kennedy really aren't a couple (they’re basically platonic friends, if so much), and Grace isn’t really Brody’s girlfriend. So, that was an interesting thing to see play out in the story.

Overall, I really liked the book. There is more to the book than romance and relationships and whatnot, but the romance was something that really struck me (especially since it mirrors my own romantic life so well). I’m really excited to read Sawyer and Kaye’s story, in Most Likely To Succeed!

I almost wish this book were written in Brody’s perspective as well (dual, with Harper). Usually, I’m not a fan of that, but I think it could have worked. Also, I wanted more physical scenes from Harper and Brody. There are like, two, total. There are a lot of sweet expository scenes, sentimental ones, but there could have been more physical ones, especially during the “chase”.

YES! If you like contemporary novels, read this one, and/or anything by Echols. I’m not even a contemporary fan, but I love Echols’ books. The way she writes romance is so great! And her stories is very relatable, very authentic.

4 stars. More like 4.5 stars. I LOVE this book. It made me sad and happy and wishful and hopeful. Maybe we can all have a happy ending.