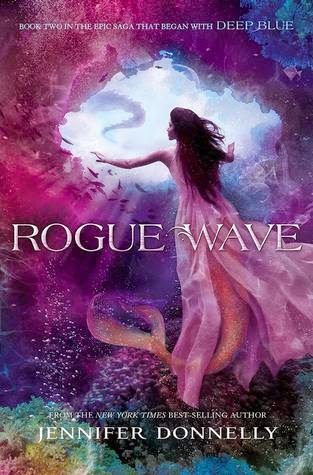 In this exciting sequel to DEEP BLUE, Serafina uncovers more clues about the talismans, Neela ventures into a sea dragon's nest, and Ling learns the identity of their foe.

Serafina, Neela, Ling, Ava, Becca, and Astrid, six mermaids from realms scattered throughout the seas and freshwaters, were summoned by the leader of the river witches to learn an incredible truth: the mermaids are direct descendants of the Six Who Ruled-powerful mages who once governed the lost empire of Atlantis. The ancient evil that destroyed Atlantis is stirring again, and only the mermaids can defeat it. To do so, they need to find magical talismans that belonged to the Six.

Serafina believes her talisman was buried with an old shipwreck. While researching its location, she is almost discovered by a death rider patrol led by someone familiar. . . . The pain of seeing him turned traitor is devastating.

Neela travels to Matali to warn her parents of the grave threat facing their world. But they find her story outlandish; a sign that she needs to be confined to her chamber for rest and recovery. She escapes and travels to Kandina, where her talisman is in the possession of fearsome razormouth dragons.

As they hunt for their talismans, both Serafina and Neela find reserves of courage and cunning they didn't know they possessed. They face down danger and death, only to endure a game-changing betrayal, as shocking as a rogue wave.

This was such a quick read, which is fantastic! I had a blast reading this one, because it went by so quickly, and I wasn't bored at all. On the contrary, I was quite engrossed, and read it in one sitting. That's always a good sign! Also, I didn't have too much trouble getting into the sequel novel. It shouldn't be too hard for readers to remember important events from book one (Deep Blue), or to jump into book two after not reading book one for a while.

This book focuses on the mermaids finding the talismans of their ancestors, so that they will have the power to defeat an ancient, unknown evil. In this book, Serafina discovers where her talisman is... along with other secrets that she didn't expect. Neela's concerns and cries for help are ignored by her parents and clan, so she takes matters into her own hands. Ling has problems of her own... the girls are scattered in the ocean, but they must work for each end in order to band together and destroy what is haunting the ocean.

Like I said, this book goes by quickly. I feel like compared to book one, not much happens in this book, but what happens is really critical and important, Serafina succeeds in finding her talisman, but she also learns the truth about some things, in the process. For example, she sees Mahdi. In his death riders uniform, with other death riders.

Eventually, Serafina and Mahdi clash. Serafina is sure that he is a traitor, but readers know that this is not so. Serafina finally learns the truth - that Mahdi is acting as a turncoat, but he is trying to stay on the "good side" of the death riders and Portia. This means swimming with the death riders... and pretending to date Lucia (Portia's daughter)... which infuriates Serafina. Rightfully so.

Nevertheless, I'm really glad that Serafina finds out the truth. We all knew this was going to happen, so I don't consider this a spoiler. What happens after she finds out would be a spoiler... trust me, it's some craziness. I NEED book three, if only to know what happens to Mahdi and Serafina's relationship.

Neela is prominent in this book as well. She returns home, only to be called deranged and crazy, because she has been through a lot. Nobody believes what she says about the dark evil in the ocean, about Abbadon, about anything. So she goes back out, taking matters into her own hands, and runs into a familiar face...

In terms of plot, things are moving right along, in both this book, and in the series in general. Serafina has her talisman, and something huge is revealed at the very end of the book, about the evil that the girls must defeat...

I must say, I really liked Serafina in this book - and Neela. Both of them show their character growth, wear it proudly. Serafina especially though. She is thinking not only about herself and the other five girls, but about her kingdom. I approve!

I mentioned the romance a bit - well, the romance in this book (and series, it seems) is between the Principessa Serafina and the Crown Prince Mahdi - I ship them so hard! They were arranged to be married in the beginning of the series, before everything got crazy and everyone went to war or ruins. Mahdi and Serafina love each other and totally belong together... we'll see where Donnelly takes their relationship, in the next book. It should be interesting. NO love triangle, don't worry about that at all.

Let me repeat that - there is NO love triangle, in neither book one nor book two. The romance is solely between two people!

Overall, I'm quite pleased with this sequel! I can't wait to read book three - I wonder if this is a trilogy, or not? Goodreads says there will be four books in the series. Either way, I'm excited to read next chapter in Serafina and the other girls' journey.

I'm disappointed that Serafina and Neela are the only two mermaids that we really get to follow - Ling is present, and Ava's voice is around (in Serafina's head, through their awesome telecommunication thing), but the other girls aren't really present. I especially wanted to see more from Astrid, but oh well. On the other hand, it would have gotten confusing, to follow each of the girls. And book one really focused on Serafina. So, pros and cons.

If you read book one, Deep Blue, then I would highly recommend you continue with the series. It only gets better! I'm not the biggest fan of mermaid-related books (I've had bad luck in the past with many series), but I really like this series. I would recommend the series to anyone who hasn't started it, as well!

4 stars. No sequel slump for this series! The second book is as amazing as the first book - and check out the covers! They seem to get prettier and prettier, in my opinion.