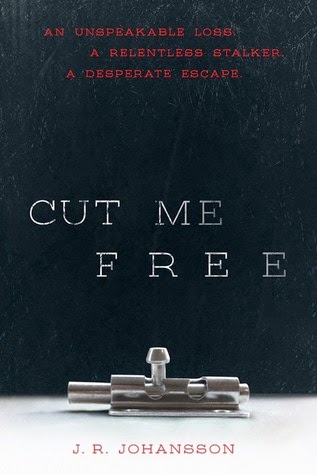 Seventeen-year-old Charlotte barely escaped from her abusive parents. Her little brother, Sam, wasn't as lucky. Now she's trying to begin the new life she always dreamed of for them, but never thought she'd have to experience alone. She's hired a techie-genius with a knack for forgery to remove the last ties to her old life. But while she can erase her former identity, she can’t rid herself of the memories. And her troubled history won’t let her ignore the little girl she sees one day in the park. The girl with the bruises and burn marks.

That’s when Charlotte begins to receive the messages. Threatening notes left in her apartment--without a trace of entry. And they’re addressed to Piper, her old name. As the messages grow in frequency, she doesn’t just need to uncover who is leaving them; she needs to stop whoever it is before anyone else she loves ends up dead.

This is my third (of three) Johansson novels - Insomnia and Paranoia are the first two books of her debut series. Personally, Insomnia is my favorite book of the three, but this one would be my second favorite. While the Night Walkers series is paranormal, this book is strictly contemporary - realistic fiction, with a heavy dose of tough issues and an interesting mystery to it. Johansson definitely knows her way around scary thrillers! This novel definitely had a scare/creep factor to it, which freaked me out but had me hooked.

In this novel, Piper is desperate to escape her old life. She becomes Charlotte with the help of a boy about her age, who draws up a fake ID and documentation for her (for a hefty price, of course). She rescues a girl just like her, one that was abused by her parents, and decides to help the girl (Sanda). But Piper/Charlotte cannot run from her past. Messages begin to appear, and there is no one to protect Piper and Sanda.

This book is relatively short - very easy to read. There is an extremely heartbreaking tone to this book. Piper was locked in an attic by her parents, given the name "Girl", and her younger brother as well - "Boy". Piper names herself Piper, and her brother, Sam. I've seen these stories of children locked in rooms, starving, abused, scared, helpless, cut off from the world, illiterate... but reading the story of Piper (and Sanda as well) is heartbreaking.

That being said, this isn't your typical tough-issue contemporary novel. This book isn't solely about Piper running from her past and healing from her wounds (physical, emotional, or otherwise). Piper is literally running, but she is also taking care of a nine-year-old girl. Piper is always on edge and panics a lot. She's always on the defensive, and doesn't like people touching her. I think Johansson brought out the authenticity of the situation in Piper, in her character. You can very easily tell that she had a traumatic childhood - which she did. And her inner demons are actually pretty scary, and serious.

I was okay with Piper. I couldn't necessarily relate but I could empathize. What she did for Sanda was extremely brave. Piper pushed away people just by her attitude, but she let Sanda in, a girl just like her.

The romance is probably one of my favorite aspects of the book. It's kind of obvious, because Cam is introduced within pages of the book beginning, but I liked Cam a lot, and I had a feeling that I would like Piper, so I thought they were good together - and they were. Cam is super sweet and attentive and protective and stubborn. Piper is also very stubborn and likes to push Cam away (she doesn't want to take anyone's help more than she has to), but that's one of the reasons why they work so well together.

The romance is structured in an interesting way. It seems like insta-love at first, because you can just TELL, but nothing happens in terms of feelings, until later in the book. And in terms of the physical sense, nothing happens until the end. I think this romance really worked in this book - the protagonist needed time to warm up to Cam, and the idea of someone caring about her.

The plot is pretty fast and definitely interesting. The mystery takes up most of the story - who is sending the messages to Piper? I definitely couldn't not finish this book, for fear of not knowing.

Overall, I liked this book. Johansson is very skilled at writing these creepy thriller stories. I'm not sure if they're for me, but I like her storytelling!

I already touched on my small issue with the romance - the thing is, I liked the romance, but I could see why someone might cry "insta-love". It seemed like Cam fell for Piper from the start, which is okay, but that seemed like insta-love. He falls in love with her pretty quickly. Piper, on the other hand, doesn't fall for him that quickly, which makes sense, given her past and her distrust of people.

I'm kind of meh about scary stories, honestly. I don't know if one would classify this one as "scary", but either way, they aren't really my thing. This one was interesting, but I guess I just didn't LOVE it. The mystery was interesting, but it was kind of cliche that the person was sending messages to Piper - it just seems like that's a "bad guy"'s preferred method of intimidation in fiction, kind of cliche. But what do I know.

I'm still a bit confused as to how the "villain" got into Piper's apartment.

If you already have a copy of this book, or you pre-ordered it or bought it or whatever, then I say give it a shot! I liked it when I was reading it, but I probably won't re-read it. If it were part of a series, I probably wouldn't continue the series, either. There would have to be a really awesome hook for me to want to read the remaining books. BUT, this book is a standalone.

3 stars. Maybe 3.5 stars. But not 4 stars. I liked the book, but not that much. If horror/thriller/contemporary is your thing, then go for it! I'll continue to keep an eye out for this author's works.