Review: Down for the Count by Christine Bell 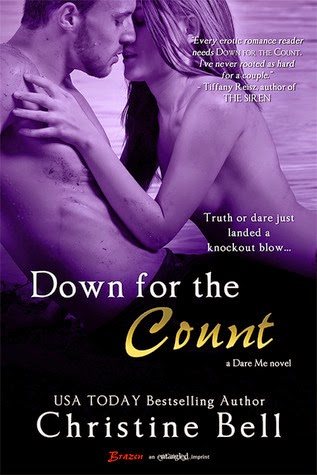 Down for the Count by Christine Bell
Book One of the Dare Me series
Publisher: Brazen
Publication Date: September 20, 2012
Rating: 4 stars
Source: Bought from Amazon

When Lacey Garrity finds her groom in flagrante delicto in the reception hall closet with her bridesmaid, she's saved by her best friend’s older brother—childhood tormentor, crush, and boxing bad boy Galen Thomas. Galen’s solution is both exciting and dangerous. What better way to forget the mess of her life than go on her honeymoon with a hot guy who can’t promise anything beyond today?

Galen had been counting on Lacey's wedding to put her out of reach—and out of his mind—once and for all, but their steamy Puerto Rican escape is testing all his boundaries. Now that Lacey’s embracing her inner bad girl, Galen is tempted to throw in the towel and claim her for himself. But with the biggest fight of his career on the line and an important business merger threatening to derail Lacey’s resolve, their romance might be down for the count before it even begins.

I read Dirty Trick, one of Christine Bell's books from another Brazen series, and mostly enjoyed it. It was pretty good, and Grace was a character that I could somewhat relate to, but I wanted more from the novel. This book, Down for the Count, was much shorter, but I liked it more.

Lacey just got married - only to find her new husband cheating on her with her bridesmaid/second best friend, Becca. The thing is, Marty and Lacey weren't really in love; they were marrying to solidify a business merger (or something like that). Marty liked Lacey, and Lacey liked Marty, but there was no spark there. Galen, Lacey's friend Cat's brother, helps Lacey escape the wedding and takes her to his cottage. Galen and Lacey have known each other since they were kids, and Lacey always had a crush on him. When Galen convinces Lacey to still go on her honeymoon... with him as company... things get heated.

I totally FEEL for Lacey. It's pretty extreme to marry someone you don't love, or don't feel any lust or passion towards, but I understand her situation. She kind... settled for Marty. Lacey could do so much better, but she totally settled. Good thing she caught Marty before it was too late. Lacey is a total control freak, completely neurotic, reined in, polished exterior. I *get* her, because I'm totally the same way. The thing is, I always say that the boring, "controlled" ones are always the most passionate... and fabulous. Closet wild child.

Anyway. I liked Lacey a lot. I liked Galen a lot as well, though I feel like I didn't get as good a read on him as I wanted. Galen is a boxer, a fighter, so he has a lot of reined control as well. But he's much more wild, in terms of appearance. Lacey's mother doesn't quite like him. The thing is, he's a considerate person. He's not stupid or dense, and he always thinks of Lacey and what she needs (especially in that vulnerable state). While Lacey is a closet wild child, Galen is a closet sweetie.

There are sooo many sizzling scenes of hot chemistry between these two. It builds slowly, but once the wedding is over and Lacey gets over her initial shock... it's actually pretty impressive, how much built-up tension there is between Galen and Lacey. They definitely had some attraction building since childhood.

The chemistry was not lacking, but neither was the romance. I loved watching these two fall for each other completely, despite the short length of the book. The conflict of the book comes full circle, and Lacey must face her fears and her problems. Lacey must also fight for what she wants (Galen?), and she does just that.

Overall, I liked this one a lot. I'll be keeping an eye out for more Bell books (and Brazen titles in general)!

Hmmm... like I said, I didn't get as good a read on Galen as I would have liked. In most Brazen books, the author alternates perspectives, between the mail and female. I feel like there was more female perspective than male perspective. Maybe they were equal, I don't know, but it feels like Galen's thoughts were less.

I liked this one a lot, so I would recommend it! Not all of Brazen's books are omg-so-good, but this one is a short and steamy read. For those who love adult contemporary romance novels, you should check out Christine Bell's novels!

4 stars. I'm glad I got this one! I really enjoy Brazen novels.