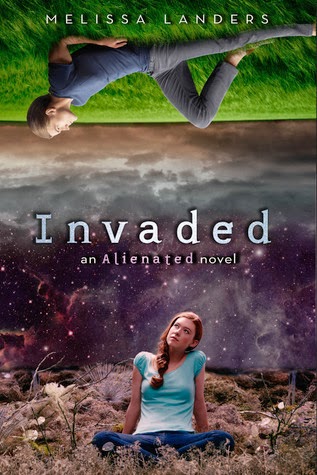 The romantic sequel to Alienated takes long-distance relationships to a new level as Cara and Aelyx long for each other from opposite ends of the universe...until a threat to both their worlds reunites them.

Cara always knew life on planet L’eihr would be an adjustment. With Aelyx, her L’eihr boyfriend, back on Earth, working to mend the broken alliance between their two planets, Cara is left to fend for herself at a new school, surrounded by hostile alien clones. Even the weird dorm pet hates her.

Things look up when Cara is appointed as human representative to a panel preparing for a human colony on L’eihr. A society melding their two cultures is a place where Cara and Aelyx could one day make a life together. But with L’eihr leaders balking at granting even the most basic freedoms, Cara begins to wonder if she could ever be happy on this planet, even with Aelyx by her side.

Meanwhile, on Earth, Aelyx, finds himself thrown into a full-scale PR campaign to improve human-L’eihr relations. Humans don’t know that their very survival depends on this alliance: only Aelyx’s people have the technology to fix the deadly contamination in the global water supply that human governments are hiding. Yet despite their upper hand, the leaders of his world suddenly seem desperate to get humans on their side, and hardly bat an eye at extremists’ multiple attempts on Aelyx’s life.

The Way clearly needs humans’ help . . . but with what? And what will they ask for in return?

Well, this book took long-distance relationships to a whole new level. Dating someone in another galaxy? Holy guacamole, that puts two different states or even countries into perspective, no? I love Aelyx and Cara's relationship. But I also love the originality and creativity of this story - so let's get to it!

Aelyx is on Earth, trying to cultivate a positive image to the inhabitants on Earth, while also trying to stay alive. Meanwhile, Cara is attempting to adjust to life on L’eihr, but it's not easy when her body won't adjust (the exercising is insane), no one will accept her (despite going through the ceremony to have citizenship), and she misses Earth, and Aelyx (especially him). Something more is happening, something bigger than the L’eihr forming an alliance with Earth. Aelyx is puzzled by why the L’eihr has been pushing the alliance so hard, and Cara is confused as to why probes have been falling on L’eihr. All the while, their very relationship is taking a hit with the distance issue...

It's been a while since I read (and re-read) Alienated, but I had no trouble getting back into the story. The Earth's water is seriously contaminated, but the inhabitants of Earth don't know that. The L’eihr can fix this problem, which is how they have control over the alliance. But most of the population of humans don't know about the water pollution, whereas the L’eihr know.

So there's Aelyx on Earth, trying to win over everyone on Earth. Aelyx and Syrine, another L’eihr, are protected by David Sharpe, a human, Aelyx is miserable without Cara, but he works tirelessly for the alliance, for her, for their future together in the colony. We get alternating perspectives in the third person, so there is plenty of Aelyx in this book. Mostly, he misses Cara, but he has to think of the alliance as well.

Cara, on L’eihr, has a hard time. The physical activity is brutal on her - and the diet is different. Not to mention that basically everyone is after her, because they think humans are strange. Which is understandable, I suppose. Her brother Troy is on L’eihr, but he will have to leave soon. Mostly, Cara misses Aelyx. But she does a lot of sneaking around and digging, because something is not right on L’eihr.

I loved experiencing life on L’eihr. Despite the fact that it kind of sucked for Cara, there were wonderful things about the planet. Vero, Aelyx's house pet, is adorable. The L’eihr children are kind of cute as well - the teething toddler scene is so lovely to read. One of my favorite scenes is with Vero though, when he finally approaches Cara (because of one specific thing). Love!

I love one specific thing that Aelyx does for Cara - for a nonhuman boy, he sure does catch on fast. She missed him so much, and he missed her, and he sent her the perfect gift. I'd take that gift over roses and pearls any day!

The science in this book is fabulous! I'm a math/science nerd at heart, a true engineer. I love that science is such an integral part of this series. The L’eihr are an advanced race, with better technology and science. Landers really does her research when it comes to the alien science behind this story, but at the same time, she uses her imagination quite well. Or is it all imagination? Hmm...

The ending of this book was a bit shocking, and definitely open-ended. It ended... well, but there is much that the author could do with that ending. I believe this series is contracted with two books, and the series ends well with this one, but a third book would benefit the series (and not detract from it). I could totally see Landers adding another installment. Perhaps it's a case of sales numbers - if there is enough interest in this book, then perhaps a third book will be possible? If that is the case, then EVERYONE needs to buy Alienated and Invaded. But you all should do that anyway.

One thing that bothered me is something that I can't really go into detail without spoiling things (so I won't). But it has to do with a decision that Cara has to make, towards the end of the novel. I feel like the time it took to convince her of going one way (which ends up being the way she chose) wasn't very long - like, it seemed rather abrupt when she decided to change her mind. Like, she was set on doing one thing, but then it didn't take much for her to change her mind. Ugh! This is frustrating to explain without actually explaining it, but trust me - the decision is pretty big, and I know how smart Cara is. I didn't think she would be swayed - either way - so fast/easily.

I loved this sequel, so I would totally recommend this one. If you've read Alienated, then you definitely should read this one, whether you liked Alienated or not. And if you haven't read the first book, then you should definitely binge-read the series! It's one of my favorite science fiction series of all time! Science fiction fans will love this series, but also, anyone who loves a sweet romance and a mind-boggling story.

4 stars -> more like 4.5 stars. I really, really hope that there will be a third novel in this series! But I'm totally content if there won't be. The author pulled off a very good ending, either way.