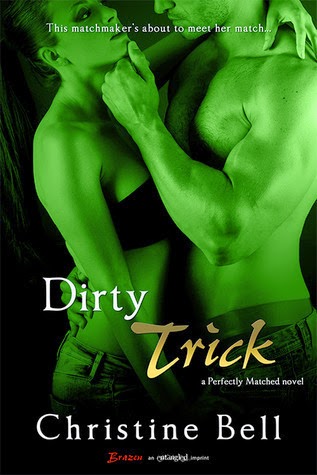 This matchmaker's about to meet her match...

Grace Love is lousy with men. She can spot a match for someone else a mile away, and her balls-on instincts are why her matchmaking business is thriving, but finding her own Prince Charming? The only guy who makes her sixth sense tingle is her playboy best friend, Trick, and no way is she risking their friendship, no matter how hot she knows the sex will be.

SWAT officer Trick Mathews is a patient guy, but Grace’s inability to see what’s right in front of her is grinding on his last nerve. Yeah, he blew his shot at breaking out of the friend zone when he tamped down the urge to lick her from head to toe the day they met, but he’s got a plan that’ll change her mind. Incognito at Salem's hottest Halloween party, he’ll show her exactly how good they could be…and that he’s the man for her.

You all know how much I LOVE Brazen books. Literally every time Brazen has a publication day for any of its new titles, I have to hold myself back. I can't afford to buy all of them, but oh how I would like to... a lot of times, I buy them way on sale. Like this one - more than a year after its publication, it was free, I believe, for a day. You can't go wrong with free. I didn't love the book, but I didn't dislike it either!

Trick Matthews has been in love with his friend Grace for quite some time, but she doesn't see him that way (or so he thinks). He thinks that she only sees him as a player, a guy bouncing between different women. But that's not the case, because Trick has been in love with Grace, and won't give up. Grace, on the other hand, has been nursing her wounds as a single lady, never seeming to find the right guy. Sure, her best friend Trick is hot... but he's her best friend. Too bad she has no idea how much he wants her.

I like these types of stories - two best friends fall for each other, or are already in love, but need something to make them realize that they're not alone in their feelings. Trick finally does something, and disguises himself for a Halloween party. He and Grace do the deed... but she has no idea that it's Trick. She is totally into it, and wants more from "Catman". Little does she know!

The author definitely dials up the steamy in this book. A true Brazen novel, this one does not like in the physicality of the romance aspect. But, the love story is really there as well. I liked seeing Grace fall for "Catman", and eventually, realize her feelings for Trick.

I really like Trick. Grace is cool, but Trick is probably my favorite. He's actually super sweet, thoughtful, considerate, and extremely sexy. Obviously the ones in uniform are the good ones, right? Perhaps...

Overall, I liked the romance, and the sizzling chemistry. This type of romance - the best friend type - is one of my favorites, as long as it's developed, and there is no love triangle. None of that in this novel!

Also, Grace's business with her friend - that wasn't nearly as present/significant in this book as I had thought it would be. For some reason, I thought it would have come into play at some point in the book, besides being the reason that Grace went to the party.

Finally, I think there could have been more depth to this book, more sentimentality. I didn't really feel much towards Trick besides omg-he-sounds-smoking. Grace, more so, because she had a terrible ex-boyfriend, and this is pretty significant in the novel. Maybe I just wanted more personal scenes between Grace and Trick. Maybe more in general, from the depth.

I liked this one, but it definitely isn't my favorite Brazen novel. I enjoyed the read!