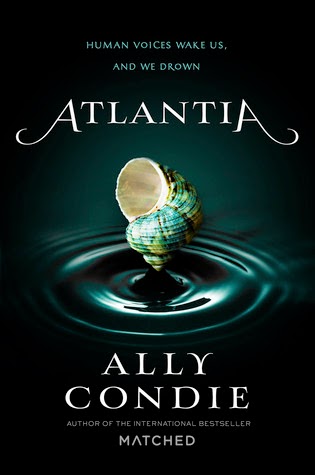 Can you hear Atlantia breathing?

For as long as she can remember, Rio has dreamt of the sand and sky Above—of life beyond her underwater city of Atlantia. But in a single moment, all her plans for the future are thwarted when her twin sister, Bay, makes an unexpected decision, stranding Rio Below. Alone, ripped away from the last person who knew Rio’s true self—and the powerful siren voice she has long hidden—she has nothing left to lose.

Guided by a dangerous and unlikely mentor, Rio formulates a plan that leads to increasingly treacherous questions about her mother’s death, her own destiny, and the complex system constructed to govern the divide between land and sea. Her life and her city depend on Rio to listen to the voices of the past and to speak long-hidden truths.

Well, I really wanted to like this one. I tried. I was super excited about this one, despite not really enjoying Matched and Crossed (never read Reached). A novel about an underwater city? Cool! No mermaids? Even better. Sadly, I was disappointed.

Rio has always wanted to go Above - she's lived Below, in an underwater city called Atlantia, for her entire. There is only one way to go Above: you get a choice as a teenager. Rio's twin sister Bay made Rio promise that she wouldn't choose Above, after their mother died. But then, on the choosing day, Bay chooses Above... after Rio chose Below. Rio is determined to be reunited with her Above. As Rio searches for a way out, she discovers secrets and the true history of Atlantia, of Below and Above.

Like I said, I was really excited to read this book! I didn't get an ARC or eARC, and that was okay. When I finally got the book and started reading, I was intrigued. How dare Bay make Rio promise that she wouldn't choose Above, and then chose it herself?! And a boy also chose Above... suspicious. Poor Rio. Rio was so distraught, so alone. She literally had no one - no father (dead), no mother (dead), no sister (Above).

Rio's aunt, Maire, starts contacting Rio. Maire is a siren - like Rio. But everyone knows that Maire is a siren, whereas no one knows that Rio is one. Maire wants to help Rio go Above, but Rio doesn't trust Maire. Rio begins to uncover secrets about the city, just as the city is curiously falling apart. There has never been a better time to go Above, it seems...

The romance was probably the best thing about this book, honestly. I really like True and Rio together. They meet because True's friend is the boy that went with Bay, Above. True create mechanical fish, and Rio starts buying them to race against them, to make herself a better swimmer. True has secrets of his own, just like Rio does. He has a gentle, quiet nature, which I really liked. I liked the two of them together.

The whole underwater city thing was awesome, honestly. Those two aspects are where the book earned its two stars from me - the romance, and the underwater aspect. It was really unique, because the city is like a bubble underwater, at the bottom of the ocean, with humans living in it (with the exception of a few sirens). I had high hopes for this book... but it didn't deliver.

Okay my biggest problem started when Bay chose Above... which was pretty soon after the book started. To be completely, while I felt for Rio, I got bored. Real quick. The author spends so much time letting Rio wallow, letting the plot kind of meander along with no purpose, no twists, no bumps in the road. Bay leaves. Rio feels sorry for herself. She decides to swim. She evades Maire. La la la... that's kind of how I felt as I was reading. Not going to lie, I was in a really comfortable position on my bed while reading this book...

... And I fell asleep. Like, actually asleep, totally knocked out, unconscious and the whole nine yards.

That says something, folks. I'm on Thanksgiving vacation right now, so it's not like I've been lacking sleep. No, the problem was that forty, fifty, sixty, pages in, I was struggling. I was bored. I needed more oomph from the plot. I needed more than Maire hinting at secrets, more than a budding friendship with True, more than swim races that meant nothing to me.

Throughout the whole book, I didn't like Bay. She doesn't pop up until the end of the book, but I spent the whole book disliking her for leaving Rio, regardless of her reasons. If she had told Rio from the beginning, the whole angst thing could have been avoided. Of course, then there might not have been much of a story, but that doesn't mean that I had to like Bay. I didn't. I didn't want Rio and Bay to be reunited. I don't like Bay.

I'm also a little disappointed because while the premise of the story is very fresh and unique, the story was really cliche and over told, honestly. Evil tyrant, falling city, super powerful protagonist, save the world, last one left, blah blah blah. This book wasn't really anything special, if you took away the setting. Meh.

Overall... things were boring. And I don't do boring. I wanted more action, or at least, more interesting SOMETHING. The "plot twists" and "big reveals" weren't that exciting or shocking.

Hmm, naahhh. I think I've come to accept to accept the fact that Ally Condie is not an author for me - her books and I don't really agree. Unfortunate to say, but true. So I wouldn't recommend this one. Don't let the pretty cover fool you.

2 stars. I'm glad I read this one, because I had been really excited to read it... but I'm sad that I was so disappointed. Tis life!