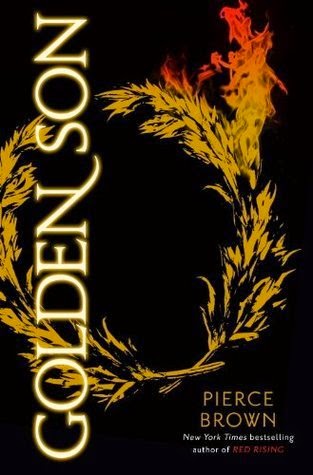 With shades of The Hunger Games, Ender’s Game, and Game of Thrones, debut author Pierce Brown’s genre-defying epic Red Rising hit the ground running and wasted no time becoming a sensation. Golden Son continues the stunning saga of Darrow, a rebel forged by tragedy, battling to lead his oppressed people to freedom from the overlords of a brutal elitist future built on lies. Now fully embedded among the Gold ruling class, Darrow continues his work to bring down Society from within. A life-or-death tale of vengeance with an unforgettable hero at its heart, Golden Son guarantees Pierce Brown’s continuing status as one of fiction’s most exciting new voices.

Reading Red Rising and Golden Son in three days total was an... interesting idea. I read Red Rising on Thursday, and started Golden Son on Friday, finishing it on Saturday. Literally over eight hundred pages... gosh, these books. I'm really enjoying the series, though I have had a serious feeling of dread and sorrow throughout the books, regardless of the tone of each successive scene. It's like I expect everyone to fail and everyone to die, in the end. I really wouldn't be surprised.

In this sequel, Darrow, now twenty, is now apprenticed under Nero au Augustus, the ArchGovernor and father of Mustang... and the Jackal. But Darrow has been cheated out of victories, and thanks to the slimy worm Pliny who advises Nero au Augustus, Darrow loses favor quickly, and Nero is forced to un-apprentice Darrow. But Darrow will not stop even without a fleet. His goal - take down the Sovereign, with or without help. He quickly realizes that he needs his friends, he needs to have many plans, and he needs to trust uneasily...

This book sort of blew my mind. Both books, really. It's truly amazing how Brown crafts the story, the world, the characters. Brown delves right into the heart and soul of war, or battle, of vengeance, of survival. He pulls out every great and terrible thing that comes with war. This whole book had an undercurrent of high stakes, danger, betrayal, endless battle. One spot of violence snowballed into an ocean. Brown really weaves a brutal and raw story of war. This is true dystopia, with all the blood and death and violence and terrible consequences.

You can literally see Darrow breaking down and falling apart and coming back together. Brown does a fabulous job of making Darrow a very, very realistic character at war. Darrow has always been a prodigy in terms of intelligence and cleverness and thinking, and he really used those qualities in this book. There were so many times when Darrow should have shut down, but he kept going.

Lots and lots of things happen in this book - I can't even begin to scratch the surface. It's a long book, but also very dense. A lot happens in a short space, as well as very little could be revealed in a long space. I love how intricate the plot is though. It feels like the skirmishes keep coming, the war never ending. When does Darrow sleep?!

It's so cool how Brown surprises readers with little things that he doesn't reveal until it's thrown in readers' faces. Like, this novel is written in the first person, but Brown writes in a way so that Darrow doesn't really everything to readers. For example, Darrow was doing something very sneaky and dangerous behind his friends' (and Society's) backs... and no one found out until he revealed it. NO ONE, including the readers. I thought this was really cool. I could see readers getting confused though, because it's like, did I miss something?! Nope, Brown is being tricksy.

In this novel, Darrow grows as a character, even more so than in the first book. The decisions he has to make - it's hard to fault him for withholding his plans from some friends and not others, or for having plan upon plan upon plan, or for threatening or manipulating some people. He thinks he's a terrible, and for his actions, he might be, but a true leader isn't innocent. Darrow learns to trust some - only to be burned by others, or drawn close. But Darrow learns some hard lessons. I feel so bad for him, during the entire book.

The romance is weird, in this series in general. I have no idea what Brown is doing with the romance, and I can't see how he's going to end the series (in terms of the romance). It could go in a million directions, especially after this book - from start to finish. Mustang hurts Darrow infinitely, and Darrow has indirectly hurt her all along. Their relationship... it's so screwed up, like so many relationships in the real world, and I like this, but I don't know what to think!

Just like in Red Rising, this book is long (even longer than Red Rising)... and it certainly feels that way. Again, I usually have no problems with long books. But this one felt its length (and then some). I felt like I read three books in the time that it took me to read this one. But this book is very dense, as is Red Rising. So it's understandable. And perhaps I wouldn't mind as much, if I hadn't decided to read these books during finals week. Hmph.

YES. I would totally recommend this sequel novel, especially if you've already read Red Rising. If you haven't read book one, then perhaps wait until closer to book three's release (hopefully in 2016 or sooner), because the cliffhanger in this book will wreak havoc on your heart. But seriously, this is an awesome science fiction series! Definitely one of the best dystopia series I've read (and I've read plenty). Perhaps because it's adult fiction?