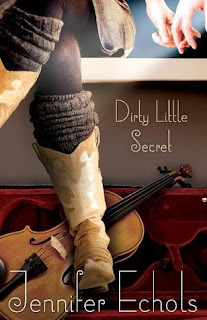 Bailey wasn't always a wild child and the black sheep of her family. She used to play fiddle and tour the music circuit with her sister, Julie, who sang and played guitar. That ended when country music execs swooped in and signed Julie to a solo deal. Never mind that Julie and Bailey were a duet, or that Bailey was their songwriter. The music scouts wanted only Julie, and their parents were content to sit by and let her fulfill her dreams while Bailey’s were hushed away.

Bailey has tried to numb the pain and disappointment over what could have been. And as Julie’s debut album is set to hit the charts, her parents get fed up with Bailey’s antics and ship her off to granddad’s house in Nashville. Playing fiddle in washed-up tribute groups at the mall, Bailey meets Sam, a handsome and oh-so-persuasive guitarist with his own band. He knows Bailey’s fiddle playing is just the thing his band needs to break into the industry. But this life has broken Bailey’s heart once before. She isn’t sure she’s ready to let Sam take her there again…

This is my second Jennifer Echols read, and I must say, I really did enjoy it! I wasn't sure if I would, because I don't read and/or like a lot of books dealing heavily with music - especially country music. I'm not sure why, but they never interest me a lot. But this book was pretty good!

Bailey no longer lives with her parents and her about-to-be-famous sister. After the disaster that occurred at the end of Bailey's high school career, her parents sent her off to live with her grandfather. Her parents send her to her grandfather's house, to hide her; she isn't really supposed to play her fiddle in public - in fear of doing something embarrassing and messing up her sister's upcoming musical career.

But when Bailey meets Sam and plays with him and his father at a mall, everything changes. He invites her to a gig, which she attends - telling her grandfather that she and Sam are on a date. More and more gig opportunities are presented, and Bailey finds herself falling for Sam.

I really liked Bailey throughout the book. She's not overly snarky, but she has spunk. She's scared of letting herself shine, even with Sam. I understood the decisions that she made, why she hid herself from the band, why she still wanted to forgive her awful parents.

Sam is an interesting character and a complex love interest. He isn't just a guitar player; he is hurt from his past by one girl - one girl that changed everything for him. Apparently, he is a bit of a player, but he's the nicest guy, so I'm not sure "player" is the right description for him. He's hotheaded, but he is dedicated to the band, and eventually, to Bailey.

The romance is not too complicated. There is no love triangle, and we know that the primary couple is Sam and Bailey. There is another pair that finally comes together - that was nice.

The plot is a bit too slow for me, and while things do happen quickly, the scenes are a bit boring, but it's not too hard to keep up. I found myself at the end of the book quickly. The ending is very good - everything wraps up really nicely.

Like I said before, the plot is slightly boring. Events occur fairly quickly, but the tone of the book was slightly boring, making the events and the plot boring. I think people will like this one, but you have to get through it.

Also, I didn't understand why Sam got so worked up over Bailey not being entirely truthful to him, right from the beginning of knowing each other. It's not like they completely knew or trusted each other! We get so cray mad over something like that! It's not likely Bailey owed him anything at all. If anything, he owed Bailey so much, after basically forcing her to come to gig after gig.

Hmmm, yes and no. Definitely read it if you are a Jennifer Echols fan. But I honestly think that there are better and more interesting contemporary romance novels out there. While this book didn't disappoint me, it still upholds my "meh" feeling towards books centered around music.

3.5 stars -> rounded up to 4 stars. A cute but angst-filled country read that wasn't too bad!