Blog Tour Interview with Avery Olive, Author of A Stiff Kiss (and GIVEAWAY!) 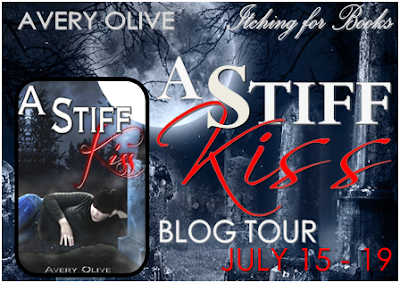 Welcome to the A Stiff Kiss blog tour! Today I have an interview with the lovely Avery Olive, and a giveaway! Enjoy! 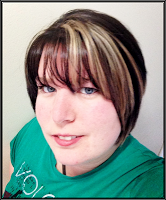 Alyssa: Hi, Avery! Thank you so much for joining today on my blog!

Avery: Alyssa, thank you so much for having me! I'm so glad to be here!

Alyssa: So, Avery. Describe your book in ten words. GO!

Avery: A slightly morbid twist of Sleeping Beauty, in reverse. Ha! I got it done in nine words, do I get a prize?

Alyssa: LOL. Virtual cupcake prize ;) *hands cupcake* And I never really thought of it that way though. How on earth did you get the idea of kissing corpses and death and all of that!? :)

Avery: As you can imagine, I get asked this question a lot. The answer is simple. A dream. I know, totally cliche, but it's true. I woke up one morning after having a dream of a girl, standing in a morgue, over a dead guy. She was leaning in for a kiss. And I thought, WTF! Who in their right mind would want to kiss a corpse! I made some notes, and eventually the idea for A Stiff Kiss became more of story, instead of just one scene.

Avery: Wow. This is a tough one. Honestly, I'm really happy with the way it turned out. I think looking back now, I wish it was a little longer, that the relationship between Xylia and Landon got to develop more. And, well, I've noticed some little typo's here and there that got missed. Those are always annoying to find after you've spent so much time trying to rid your novel of them!

Avery: Gum. I chew an insane amount of gum. I sort of calms me, and gives me something to do, and helps me concentrate. Oh, and Dr. Pepper, I drink that stuff like it's water!

Alyssa: I don't chew gum, but I do love my soda ;) What type of books do you like to read? What are you currently reading?

Avery: Since I write a lot of YA Paranormal Romance, I read a lot of that, or rather, YA in general. Um, I just finished Born of Illusion by Teri Brown, and I'm just about to start Becoming Bryn by Angela Carling.

Avery: Everything is a distraction, but honestly, I actually work better when there is a deadline looming. I'm horrible for leaving things to the last minute. I think, sometimes, my middle name is procrastination. But then again, shh, don't tell, but I think I procrastinate on purpose, just so that I have that pressure of a deadline, and have no choice but to focus. I seem to get more done that way!

Alyssa: What’s the largest amount of words you've ever written for the final draft of one of your books?

Avery: Well, I just finished a manuscript that's a whopping 112,000 words. But, that probably won't stay that high, since that was a first draft. But I did turn over a final draft to my agent, and that was about 87,000. So, I'd say I vary. But it was something of a surprise when I broke that 100k mark, thinking wow, that's the most I've ever written for one novel!

THAT'S A LOT OF WORDS.

What’s one song that embodies A Stiff Kiss?

Avery: I have no idea! One song? Yeah, I'm at a loss, any suggestions? I do have a few songs on my "playlist" for the novel. But not one song that I think fits the entire novel. Here are a couple.

Alyssa: Oooo, I like the Kelly Clarkson one. What are you currently working on - something new? Anything contracted?

Avery: I have a novel coming out in Fall 2013 called Won't Let Go, I'm working on the last little bit now and hope to reveal the cover and blurb shortly. It's a ghost story with a few twists. And currently my agent is working tirelessly to sell one of my novels, but really everything else is kind of hush, hush. I never talk about what I'm working on until I've got something concrete. So, stay tuned!

Alyssa: And that’s all for today! Thank you so much for stopping by my blog, Avery!

Avery: Thank you so much for having me. I always have so much fun doing interview! And I hope you'll let me come back in the future!

Alyssa: Anytime, Avery. You are welcome to pop in whenever you can! :) 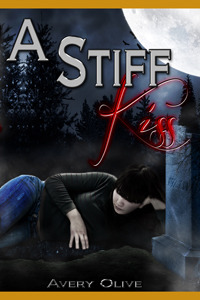 Who knew kissing a corpse would change everything? Death always hits Xylia Morana too close to home, but she likes it that way. She hangs out with the terminally ill, attends random funerals, and every so often, when the weather is right, she sleeps in open graves. But after Landon Phoenix, the high school hottie, dies in Xylia's hands, she sneaks into the morgue to say goodbye. How could she know stealing a kiss from his corpse would wake him up? With Landon returned to the living and suddenly interested in Xylia, life has new meaning. But what Xylia doesn't realize is that by kissing Landon back to life, she's thrown Life and Death off balance. The underworld demands a body, and it might just have to be Xylia's this time.

Avery Olive is Canadian. She is married and has one child. When she’s not helping raise her very energetic and inquisitive son, she can be found working on her latest novel--where she devilishly adds U’s into every word she can.

When she is looking for a break Avery enjoys cake decorating, losing herself in a good book, or heading out to the lake to go camping.

The release of Avery’s first novel proves to her it won’t be the last. As long as her family continues to be supportive, she can find the time, and people want to read, Avery vows to keep on writing.