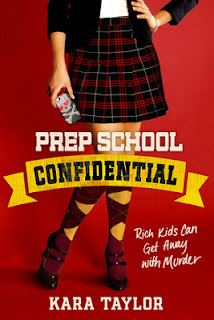 Oh how I liked this book! I seriously did not expect to like it as much as I did. I mean, I didn't expect NOT to like it, but I didn't think I would like it this much. You know what I mean? I usually don't like the Nancy Drew thing, and definitely not Gossip Girl. I never enjoyed that show. Anyway.

I love books set in boarding school! Examples are Haven by Kristi Cook, Night School by C.J. Daugherty, Thorn Abbey by Nancy Ohlin, etc. I was pleased to see that Anne was sent to boarding school (though she was not!). Anne basically set her school on fire while doing naughty things with a guy she shouldn't be around, and so her fancy parents ship her off to an even fancier boarding school.

Reading the summary, I was kind of meh. I get board easily when it comes to whodunit novels, because usually, the author takes you around and around and then drops you back to where you started. I know that sounds really vague, but basically, I hate wondering about who did it and what happened, especially when I can figure it out pretty quickly.

Well. In this novel, I could NOT figure out who was at fault quickly. There are always ideas as to who might be at fault and who definitely had a role to play in Isabella's murder, but the ending was shocking! The person, the reasons, and everything that followed the Big Confession... everything was a surprise to me! I like how Ms. Taylor kept readers guessing constantly, but not in such a way that readers would get bored.

I love the depth of the characterization in this book. I go from completely hating Anne to really liking her. In the beginning, I just wanted to punch her in the face, because she acts so stupid and rich and spoiled and stuck up. By the end, she definitely has more backbone and better judgment.

There is a love triangle in this book, but it didn't bother me that much, which was nice. I kind of didn't care which boy Anne liked more. Brent is the golden boy of the boarding school, and we meet him first. Anthony is Isabella's brother, and we meet him towards the middle of the book. Anthony is definitely more rough and dangerously appealing than Brent, but Brent is sweet and level-headed. I'll let you figure out who she chose.

Like I said before, the author did a great job of keeping readers guessing. The plot kept me interested, as their was something happening at every turn of the page.I was never bored during this book! And the ending is nice, but it leaves room for more books (which is why this is book one of a series). I can't wait to read the next installments in this series!

I think I really wanted more from the romance on both sides. Anne ends up with this one guy, but I didn't feel the chemistry or romance between them. I really felt the chemistry between Anne and the other guy, but that's not who she chose in the end. I think that the author played up the guy who Anne chose, and made their relationship seem like it was full of romance, but it wasn't.

Also, I know I said that I liked the progression of characterization of Anne, but I need to mention this. I almost stopped reading this book at the very first chapter. I disliked Anne from the very beginning that much. Granted, I did end up liking her. But gosh. I wanted to punch her in the face or stop reading in the first chapter. That's not a good sign. Not everyone has a rule against DNFing.

I totally would! To contemporary lovers, this is something you should definitely pick up. I can't say that hardcore science fiction or paranormal lovers will like this one, but give it a try if you see it around.

4 stars. A fine debut, Ms. Taylor! I hope to read the next books in this series as soon as possible.