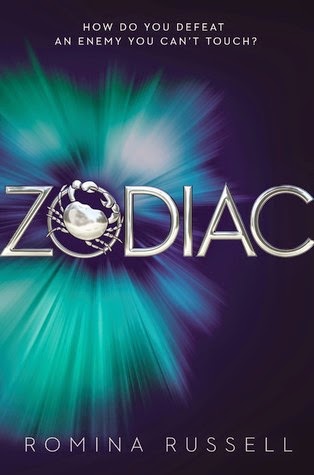 At the dawn of time, there were thirteen Houses in the Zodiac galaxy. Now, only twelve remain. . . .

In the Zodiac galaxy, your astrological sign determines everything about you. The stars tell the story of your life, and nothing—and nobody—is real unless you can actually touch them.

It’s a galaxy divided, where personalities clash and suspicions run high. Everyone is a potential enemy, so it’s best to stick to your kind. Hard-working realists in House Virgo scoff at sweet-talking Librans, who use stellar social skills to climb to the top. And while the brooding twins of House Gemini take forever to make a decision, optimistic Sagittarians hop from adventure to adventure without a thought.

House Cancer prizes loyalty and honesty above all else. When an unforeseen catastrophe strikes their ocean planet, the stars select sixteen-year-old Rho as their new Guardian. Rho suspects an ancient, power-hungry evil of legend has returned to exact revenge across the entire Zodiac. But Rho is an unknown novice and one of the youngest Guardians ever. Who should believe her?

And with the stars anywhere but in her favor, how can Rho defeat an enemy she can’t touch?

This first book of an epic sci-fi-meets-high-fantasy series takes place in a galaxy inspired by the twelve astrological signs—rendered with stunning complexity that both transports readers to a fascinating new world and holds up a mirror to reflect how we can better know each other in our own.