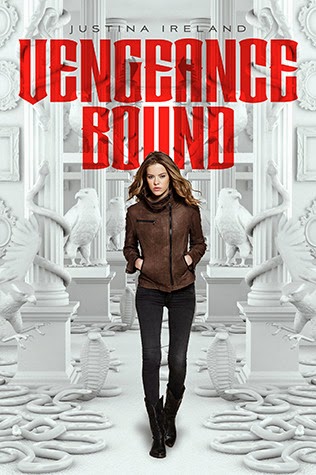 Cory Graff is not alone in her head. Bound to a deal of desperation made when she was a child, Cory’s mind houses the Furies—the hawk and the serpent—lingering always, waiting for her to satisfy their bloodlust. After escaping the asylum where she was trapped for years, Cory knows how to keep the Furies quiet. By day, she lives a normal life, but by night, she tracks down targets the Furies send her way. And she brings down Justice upon them.

Cory’s perfected her system of survival, but when she meets a mysterious boy named Niko at her new school, she can’t figure out how she feels about him. For the first time, the Furies are quiet in her head around a guy. But does this mean that Cory’s finally found someone who she can trust, or are there greater factors at work? As Cory’s mind becomes a battlefield, with the Furies fighting for control, Cory will have to put everything on the line to hold on to what she’s worked so hard to build.

I'm not too sure how I feel about this one. On the one hand, I enjoyed the story. It was a fun, fast-paced book, with plenty of action and even a cute romance. On the other hand, I'm a little meh about this book. I don't feel like I should be gushing about it, or sharing it or recommending it or such. I liked it, but I didn't love it, how about that?

Amelie/Cory is the third Fury - she replaced Alekto. Cory is human, but she has the other two Furies with her, sort of. They inhabit her mind, and when they are ready to execute judgment on guilty men, they pop out, and with Cory, punishment is given out. Cory has been running from her past - she used to be in an insane asylum of a sort, with a crazy doctor who wanted to study her for his own means. So Cory has been on the run since she was twelve. She ends up back in Pennsylvania, trying to go to high school, while search for that doctor, to kill him.

I have to say, I don't think I was too bored for too long at any point in the book. I wanted to know how Cory would get rid of the Furies inside her - you know that will be a conflict, you just know it will be. And as soon as she meets Niko, in high school, my attention perked up. So there was the internal battle with the Furies, finding the doctor, high school drama, and Niko.

I like Niko. I honestly think he was a little flat and underdeveloped, but I liked him - or at least, the idea of him. Cory and Niko are a cute couple. I wasn't really feeling the romance, even though I really wanted to be invested in it. I feel like it was brought on too quickly, and then the snowball rolled down the mountain. I'm not saying there was insta-love, but it felt like the romance was a bit detached.

Anyway. I liked the story. That's good. I liked the voice of this book - Justina Ireland definitely has a distinctive writing style and voice. It was the same voice I noticed in Promise of Shadows. I wonder if all of Ireland's books will have this voice and tone? I suppose I will see - if I choose to read any more of her books. So far, I haven't been super impressed.

I said above that I thought the romance was detached. Here's the thing about me and romance: if you're going to have the romance in the book, then don't make it detached or informal or basically not there. If the story is marketed as having a romance, then make it in the story, with FEELS romance and whatnot! In this book, I can think of one scene that gave me a butterfly or two in my stomach. Maybe. That was it. BUT the romance in this book is supposed to be monumental, earth-moving, window-shattering, or whatever. It is because of Niko (Cory's feelings for him, really), that Cory questions her duty with the Furies. But I really was not feeling the romance.

Also, I didn't really connect well with Niko. He seemed a little one-dimensional, like there wasn't much to him besides him being a love interest to Cory and best friend to Cory's best friend. Which was weird. That chick is whack, just saying.

Overall, I was a bit meh about this one. I liked the story, but I didn't necessarily like it enough to re-read it or recommend it to someone else. And honestly, while there was plenty of action, this book had a fluffy tone to it. I expected more kickbutt, dark vengeance... nahh, it wasn't that dark.

Nahhh. Maybe it's just me, but I'm not a huge fan of Justina Ireland's books. I LOVE Greek mythology, and I love that Ireland chooses to incorporate it into her books, but the execution is so mehhh.

3 stars. Good, but not amazing. I read it because I had a copy, not because I was about to break my neck trying to read it. Otherwise, ehhh, it would have flown under my radar.