Review: A Good Debutante's Guide to Ruin by Sophie Jordan 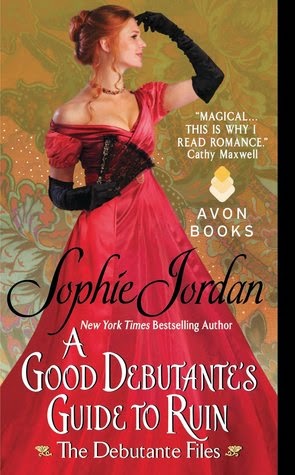 The last woman on earth he would ever touch . . .

Declan, the Duke of Banbury, has no interest in ushering Rosalie Hughes, his stepsister, into society. Dumped on him with nowhere else to go, he's determined to rid himself of the headstrong debutante by bestowing on her an obscenely large dowry . . . making her the most sought-after heiress of the Season.

But Rosalie isn't about to go along with Declan's plans. Surrounded by fortune hunters, how is she supposed to find a man who truly wants her? Taking control of her fate, Rosalie dons a disguise and sneaks into Sodom, a private club host to all manner of illicit activity—and frequented by her infuriatingly handsome stepbrother.

In a shadowed alcove, Declan can't resist the masked temptress who sets his blood afire . . . any more than Rosalie can deny her longing for a man who will send her into ruin.

Rosalie is the stepsister of Declan, a Duke and bachelor who wants nothing to do with her. But when Rosalie is deposited at his doorstep with nowhere to go and no mother in sight, he can't just turn her away (even if they are not blood-related). Declan places a huge dowry on her, and ushers her into the Season with his cousin, Aurelia. Rosalie has been in love with Declan for quite a while, and it's time that Declan realized that.

I. Loved. This. Book. Seriously. There were so many parts and puzzles, so many subplots and twists. Rosalie moves in with Declan, and the chemistry doesn't start yet. Declan despises the idea of Rosalie because he hates his stepmother (her mother). Rosalie's mother married Declan's father, but everyone knows that she is a gold-digger, horrible mother, and a loose woman that flits from man to man. But as time goes on, and the proximity of Rosalie doesn't change, Declan starts to realize that she isn't like her mother. At all.

I really liked Rosalie - she is quick-tempered and strong-willed, but she is also shy and well-mannered. I liked Aurelia as well - she is intelligent and thoughtful, but brash and bold. Aurelia convinces Rosalie to come with her to Sodom, which is basically a fancy whorehouse. Rosalie goes there masked, for a kiss, and guess who the hostess of the house sets her up with? Declan, a notorious nobleman who frequents the house, but also quite the gentleman. Declan doesn't realize it's Rosalie. Not until much later on in the book... oh, I loved that scene.

Let's talk about that scene. My favorite scene in the book was probably the library scene. You'll know what I mean if/when you read it. It was sweet, steamy, vulnerable, tense, and revealing (in terms of many secrets between them). Favorite. Scene.

I really liked Declan as well. I love how smoothly Jordan made the progression of his feelings. It wasn't just they-see-each-other-and-BAM-smoking-hot-chemistry-everywhere. No, in the beginning, Declan can't reconcile his negative feelings towards Rosalie. Things slowly change, and I love how both of them went after what they wanted.

So... I loved the chemistry. And the romance. The relationship between Declan and Rosalie isn't just physical (though that a pretty hefty part of it), but they also are best friends, from childhood and in adulthood. I love how Jordan kept bringing things back from their past, like the climbing trees aspect.

There is a story to this book, besides the romance. There is the relationship between Rosalie and Declan, Declan and his masked woman from Sodom (who is Rosalie), Rosalie's relationship with her awful mother, and Rosalie's first Season. So much is going on, and I loved all of it.

Basically, this book is in the running for one of my favorite historical romance novels so far. My first Sophie Jordan was a hit!

There wasn't anything specific that I didn't like about this book! This isn't towards the book, the content, or the author, but I wished the title matched the story a little more. I was expecting something different, based on the title. BUT THAT'S OKAY. This book was excellent.

4 stars. I cannot wait to read the next book (it's a companion novel, as with most historical romance series)! I believe it features Aurelia's story. EXCELLENT. I hope it features Max as well. I LOVE their banter ;)