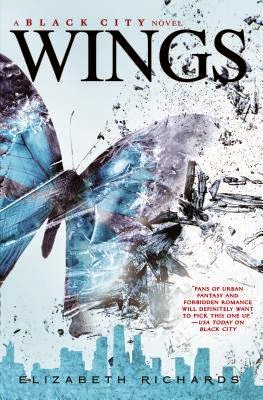 Following the cliffhanger ending of Phoenix, Natalie finds herself separated from Ash and unexpectedly reunited with her parents, including the father she thought was dead. But she can only think of Ash. She hasn't heard a word of him since she and Elijah were brought to the underground headquarters of the Sentry Rebellion. But she vows to find him.

Ash, meanwhile is back in Black City; it's the perfect place to hide from the Sentry government. But not for long. He won't give up on Natalie or bringing an end to the terrible reign of Purian Rose.

A pulse-racing end to an exciting series.

WOAH. I did NOT see this book coming at all. When I say "this book", I mean all of the crazy plot twists and turns that Richards threw in this book. I would NEVER have predicted what she created in this final novel of the series. Everything depended on this book, and right up until the end, Richards kept surprising me. Woah woah woah.

At the end of book two, Ash and Natalie are split apart. Natalie is taken by Garrick, Elijah following behind them. Ash, Ace, and Marcel continue the journey to find the Ora, to stop Purian Rose. Meanwhile, it turns out that Garrick is working for her father - yep, he is actually alive, and not dead, like Natalie was led to believe. Natalie is reunited with her mother as well, but both of her parents refuse to let her go find Ash. But Natalie and Elijah won't sit idly while Ash is who knows where. And Ash won't stop until he finds Lucinda and Yolanda, and the Ora.

I don't even know where to begin. I almost hate reviewing conclusion novels, because so much rides on this final novel. So much matters, and if I say one "wrong" thing, I might ruin the book (and potentially the entire series!) for someone. This book was full of surprises, so I'll tread carefully. For one, Richards introduces a new perspective. Originally, she alternated the storytelling between Ash and Natalie's first-person points-of-view. But from chapter one, readers meet Edmund, from thirty years ago.

This perspective is vital to understanding the rest of the novel. At first, I was like ehhh, thirty years ago, I won't put much stock into what has happened in the past. But as I kept reading, especially the parts in the present, things started to make sense. AT FIRST, it won't make sense. Edmund's perspective seems like a sad story that takes up space and pages. But knowing his past, his actions, his struggles, is very important. It puts things into perspective, when you consider certain characters. I'm trying to be vague!

So the addition of a new perspective was great! Edmund's perspective was of the past, so the parts that he told never intersected directly with the present, told by Ash and Natalie. Not directly, anyway. As always, I really liked following Ash's perspective, more so than Natalie's. But in this conclusion novel, I think I finally liked Natalie. In books one and two, I struggled a little with her character, but I think I like her. She matured since book one, so I'm happy with the character development.

You'll never believe how Richards twists the story over and over, especially when it comes to the Ora. I so did not see that coming - and you all know that I'm a pretty astute reader. I pick up on foreshadowing really well, and see predictable plot twists from ways off. But Richards did an AMAZING job of throwing certain curveballs into this book. But I also like how things come full circle. Little details from books one and two come back in book three, which is really cool. The only thing I saw coming was something to do with the necessity of the twin-blood at the climax of the book - totally called that one. But no biggie! I'm so glad that the certain thing was spun in that direction. Vagueness, I know.

That being said, the plot was excellently written and crafted. I was never bored, throughout the entire book. I was thoroughly entertained! I mean, there was a lot of death and violence and hurt. Soooo much death. I thought by the end, EVERYONE would die! Richards has no fear when it comes to axing her characters. But it definitely added authenticity to the world that Richards has created. Death is a constant at Black City.

The romance is superb, throughout this series. Book two was a bit weird, in terms of the romance, because of Natalie's stupid trust issues, and Ash's sadness over what he perceived was Elijah and Natalie's relationship. But this book showed a strong romance, a strong connection between Ash and Natalie. Insta-love is not what happened in this series, despite what one might think, judging from book one. It's very obvious at the end of the book. Very obvious indeed.

I like how things weren't cookie-cutter perfect, at the end. Ash is damaged throughout the series. Natalie is damaged throughout the series. Both are physically, mentally, emotionally scarred. All of the characters bear battle scars, and all of them suffer somehow. I like how imperfectly perfect the ending is. You all know how I hate it when series end too perfectly - well, this one ended perfectly imperfectly!

There really wasn't anything that stuck out to me, that I didn't like! I'm giving this one four stars based on how I feel, versus how many things I did not like. It was a great novel!

DEFINITELY! I would recommend this novel, if you've read books one and two, or even just book one. This is a series that you should keep reading! There really is no slump in the series, and the conclusion isn't terrible or bittersweet or cruel. This is definitely one of the most consistently "good" series I've read - meaning, all three books of the series were excellent.

And if you haven't started this series, I would consider doing so, if I were you! I remember when the book one first came out, people were turned off by the vampire aspect - trust me, in this book, it's nothing like what the world has commercialized vampires to be. Don't let the "vampire" thing stop you from trying this series! Believe me, I was so sick of vampires after reading like, three series involving them. I would never lead you all astray, especially when it comes to vampires. I promise!

4 stars. I'm so impressed! This was such a great book, such a fantastic end to a wonderful series. It won't leave you heartbroken or raging or confused! I'll definitely be following Richards for more novels - she has me hooked!