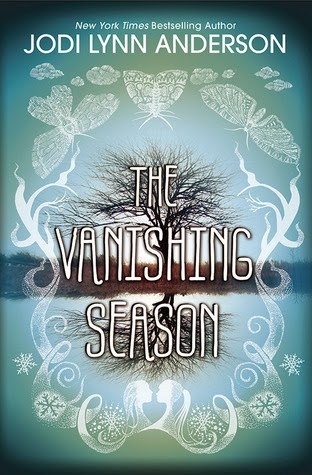 Girls started vanishing in the fall, and now winter's come to lay a white sheet over the horror. Door County, it seems, is swallowing the young, right into its very dirt. From beneath the house on Water Street, I've watched the danger swell.

The residents know me as the noises in the house at night, the creaking on the stairs. I'm the reflection behind them in the glass, the feeling of fear in the cellar. I'm tied—it seems—to this house, this street, this town.

I'm tied to Maggie and Pauline, though I don't know why. I think it's because death is coming for one of them, or both.

All I know is that the present and the past are piling up, and I am here to dig. I am looking for the things that are buried.

From bestselling author Jodi Lynn Anderson comes a friendship story bound in snow and starlight, a haunting mystery of love, betrayal, redemption, and the moments that we leave behind.

The writing style is excellent, probably the redeeming quality of this book. Not enough for me to bump up the rating though. Oh no no no, this book was just AWFUL.

I don't even know where to start. Maybe if I narrate what I did not like, it'll make it easier for me explain everything that I hated/disliked. I feel like I'll miss something or things. But, let's see. Nothing happens. There was no plot. I was bored the entire time. I was close to not finishing this book. There is a love triangle. There is a random narration point-of-view that was unnecessary. The protagonist is spineless. The ending was horrible. The premise - about missing girls - was so anticlimactic and barely present in the story. THERE WAS NOTHING TO THIS BOOK.

Nothing happens in this book. I was so disappointed by the lack of plot, it's unreal. The premise was so interesting and promising, about missing girls and whatnot. It sounded creepy and haunting, a combination that I don't read often, but I generally enjoy. But NOTHING HAPPENS. Maggie and her parents move to somewhere remote in Wisconsin (I think it's Wisconsin?), she becomes friends with Pauline, who is totally not in love with Liam. But Liam is in love with Pauline. Then he is in love with Maggie, and Maggie is in love with him. But then Pauline comes back from her vacation in Florida (or whatever), and gets jealous, and decides that she loves Liam. Of course he dumps Maggie for her.

You must be thinking, oh, so this book is a contemporary romance type of book? That's not necessarily a bad thing, right? WRONG. I just made it sound like things happen in this book, in terms of the romance, but UGH, it takes forever for any ONE THING to happen. This book moves at a snail's pace, and even still, it feels like nothing happens.

ESPECIALLY in terms of the missing girls premise.A total of four girls disappear, then an arrest is made, but of course it's not the right guy, but no one knows that. No one except the weird narrator, who is a dead ghost, mind you. We don't know who that ghost is until the end of the story. But anyway. The missing girls thing is NOT well-explored, or brought to the forefront of the story, like I thought it would/should be. No, everything is about Pauline.

Dang, I hate Pauline so much. She is so flighty and stuck-up and snobby and self-centered. I hate people that are so privileged, they never have to make up their mind for anything, they never have to want for anything, they always get what they want, even if that means stealing and crushing someone else's desires. Pauline takes away so much from Maggie, and yet, Maggie is still friends with Pauline.

Which leads me to my next point: I HATE THE PROTAGONIST. I hate Maggie so much. She is SPINELESS, with no backbone, whatever. It's like she doesn't feel, from beginning to end. At first, I thought she was a little like me, hardworking, with her school and future career in mind. But no, she's a doormat. She lets Pauline back into her life, time after time, no matter what Pauline does to her. Pauline and Liam get together as a couple, after Liam and Maggie get together, and yet, Maggie stills forgives them and hangs out with them. Forgive them? Maybeeee. Continue being friends with them? Both of them? Either of them? Hell to the no.

That narration that I mentioned? It's a dead person, a ghost, who lives in the house that Maggie lives in, so it can see what is going on in the house and around the town. The rest of the book is told in third-person past tense, limited to Maggie's perspective. So the narrator is supposed to give us holistic perspective, I think. Whatever. I thought it was pointless and unnecessary, and I didn't really understand its purpose. Even in the end, when everything was revealed, I didn't understand.

So, yeah, I was confused while reading, and after reading. Why was the missing girls plot not fleshed out? It didn't exist! Things didn't seem eerie and haunted in this book - no, the mood was flat. Everything seemed dry and boring, and I could care less. Usually I could fly through a less-than-three-hundred-page-book in less than two hours. It took me FOREVER to read and finish this book. I was so close to not finishing, you all. I really wanted to read something more interesting.

LOVE TRIANGLE. Oh my gosh. Why why why. You already know my thoughts on love triangles in general, and you already can gauge how I feel about this one. I hate Pauline in general, but I especially hate her when she takes Liam for herself. Liam always loved Pauline, so I can't fault him as much, but he broke Maggie's heart. And Maggie - seriously?! I totally understand not fighting for him, but don't torture yourself by hanging out with the two of them, forgiving them so easily. She didn't even yell at them or show them her anger or frustration. She never talked to them. That's so stupid!

The ending is so horrible. It's like the disgusting icing on a nasty cake, or something. What's the point?! What's the point of going through this entire "story" (or lack of), to end it like that!? Ughhhh.

No. No no no no. I know a ton of readers are really excited about this book, because the author's debut novel, Tiger Lily, was epic and amazing and writing was beautiful and blah blah blah. I didn't read that one, but I have read this one, and it is just AWFUL. Don't hurt yourselves.

1 star. Basically, there was nothing to this book. I'm really disappointed - I was hoping for something epic, like I've heard about Tiger Lily. Too bad!