Review: Through To You by Lauren Barnholdt 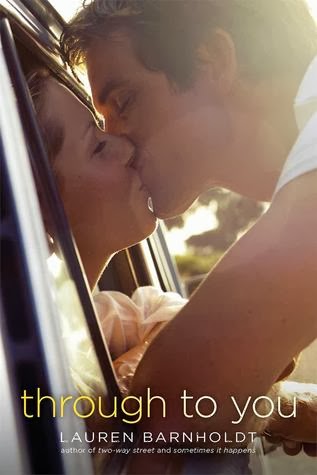 Opposites attract—and then complicate—in this romantic, relatable novel from the author of Two-way Street and Sometimes It Happens.

It starts with a scribbled note in class: I like your sparkle. Harper had casually threaded a piece of blue and silver tinsel through her ponytail in honor of school spirit day. And that carefree, corny gesture is what grabs Penn Mattingly’s eye. Penn—resident heartbreaker of the senior class. Reliably unreliable. Trouble with a capital “T.” And okay, smolderingly sexy.

Harper’s surprised by Penn’s attention—and so is Penn. The last thing he needs is a girlfriend. Or even a friend-with-benefits. The note is not supposed to lead to anything.

Oh, but it does. They hang out. They have fun. They talk. They make out. And after a while, it seems like they just click. But Penn and Harper have very different ideas about what relationships look like, in no small part because of their very different family backgrounds. Of course they could talk about these differences—if Penn knew how to talk about feelings.

Harper and Penn understand their attraction is illogical, yet something keeps pulling them together. It’s like a crazy roller coaster—exhilarating, terrifying, and amazing all at once. And neither knows how to stop the ride…

Oh my gosh. Oh my gosh. OH MY GOSH. I already know I will not be able to do this book justice. I've read it, re-read it, and I'm about to re-read it again. THAT GOOD, PEOPLE, THAT GOOD. I usually dislike YA contemporary novels - they don't seem to be my thing - but I think this is the second YA contemporary novel for 2014 that has received a rare 5 stars from me. HOLY GUACAMOLE.

Harper and Penn are literally opposites - Harper is the quiet, good-girl, nerdy type, and Penn is the brooding jock type. I know both sound incredibly cliche, but I found that neither of them were cliche at all. Anyway. It all starts with a silly note that Penn leaves on Harper's desk. Then they start hanging out. Then they start to care about each other. But Penn keeps pulling Harper close and pushing her away. Penn's accident, his tragic family, and his desire to be left to his own devices seem to drive Harper away. And Harper, well, she knows she should be focusing on things like her Ballard application. How will they survive?

There are so many wonderful things I want to talk about! The story is so great, as well as the characters, the realness/authenticity of everything, THE ROMANCE. Oh, the romance. You'll see in this review one of the reasons why this book was SO GOOD to me.

The flow of the book is so lovely. One of the things that I usually dislike about YA contemporaries is how romance-focused they are. YES, the romance in this book is definitely a big deal. But so is Harper's relationship with her best friend Anna (especially after Harper starts dating Penn). So is Anna's love life. So is Penn's family life. Harper's family life. Harper's dance application, her choreography, her fear of the school nurse. There are so many great things that made this story more than just a love story. And the constant humor is SO AWESOME. I loved reading the small parts at the dance studio with the engaged couple that were always fighting. So funny!

The two protagonists - oh, how I loved them both! I'll start with Harper. She's quiet, kind, smart. She talks a lot, but she also listens. She's never been in a relationship before Penn, never kissed a guy. Honestly, I relate to Harper a lot - we're like, the same person. Seriously though. Which is why I don't see Harper as a cliche "good girl" - I don't really see myself as one either. Harper is so sweet and selfless - she was always looking out for Penn, for what's best for him. She pushed him, but never too much.

Penn. Oh Penn. He's a jock, an injured baseball player, with a cocky smile and a history of girls and that lazy charm that he doesn't have to work for. He definitely corrupts Harper - not that there is anything wrong with that. Penn is thoughtful yet moody, confident yet vulnerable. But let me tell you why I really like Penn. Don't get me wrong - I really like him in the story. But here it is:

Harper is a lot like me. Penn is a lot like This Guy, who will remain nameless. This Guy plays soccer, has that lazy charm, confidence, smile, and a history of girls. He's thoughtful when he wants to be, moody, and he corrupts me entirely too much. That's actually a joke between us - he's always trying to get me to live more, to take risks and chances, to be corrupted by him. HA HA. So Penn is a lot like This Guy, which is why I like Penn so much. Penn is JUST LIKE a guy in real life. Harper is JUST LIKE a girl in real life. Neither are cliches, but both are very authentic.

So, yeah, this story has a lot of authenticity to it. It should, since it's a contemporary novel, but the fact that I could relate so well to Harper and Penn and their relationship is incredible. Literally, this book spoke to me. You have no idea. The characters, even the ones besides Harper and Penn, seem so lifelike.

One of the things that I really liked how Barnholdt portrayed is Penn's moodiness and Harper's insecurity and even Penn's insecurity. Penn knows that Harper is too good for him, and he worries that she'll "come to her senses" and stop wanting to be with him. He's also extremely moody, because he hates talking about his injury, or anything related to baseball. Once upon a time, I would have gotten mad about this - why is he so moody?! But after hanging out with This Guy for so long, I get it - guys have such different minds. This Guy hates talking about it when he and his team loses a game. He hates people feeling sorry for him or pushing him, when he's down. So, I really get Penn and his moodiness. It's not necessarily an excuse, but I get it.

The romance... ahhh, I loved the development of the romance in this book. I can see the romance annoying some people, because it's very on and off, black and white and gray, there and not. However, I love this. I love watching Harper and Penn dance around each other, collide, bounce back, collide again. Their relationship is very much a modern-day teenage relationship, I must say. Barnholdt has that down.

I really did NOT like Barnholdt's The Thing About the Truth, but I am so glad that I decided to give her another chance, with this book. Because THIS BOOK. It was so so so good, people. I can't even put into words how much I loved this book. I read and re-read it in the same day!! And will re-read it again! So much love for this book, SO MUCH LOVE.

On a sidenote, this book ends so well. Not cookie-cutter perfect, because that would have been cliche, but really, really well. Me and This Guy? Well, unlike Harper and Penn, we can't find our rhythm, so that's not happening at the moment (unfortunately). In case anyone was wondering.

I CAN THINK OF NOTHING. NOT ONE THING. Soo... yeah.

YAAASSSSSSS!! I'm sorry, forgive my enthusiasm and excitement, but this book. THIS BOOK. I can't even form proper sentences, my love is too great! Seriously, contemporary fan or not, definitely make a point to check out this book. If you're in the mood for a wonderful, realistic romance, then head this way!

5 stars. Wow. Wow wow wow. This book took me completely by surprise. If all YA contemporary novels were like this... well, then I would get bored of them, so I guess I'm glad that they're not. All the others that I've read and disliked have really made me appreciate the ones that I loved, like this one! THIS ONE WAS SO (OVERALL) PERFECT!!