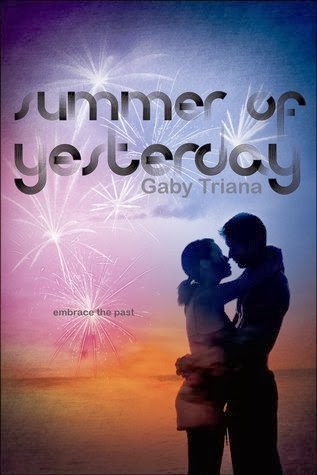 Back to the Future meets Fast Times at Ridgemont High when Haley’s summer vacation takes a turn for the retro in this totally rad romantic fantasy.

Summer officially sucks. Thanks to a stupid seizure she had a few months earlier, Haley’s stuck going on vacation with her dad and his new family to Disney’s Fort Wilderness instead of enjoying the last session of summer camp back home with her friends. Fort Wilderness holds lots of childhood memories for her father, but surely nothing for Haley. But then a new seizure triggers something she’s never before experienced—time travel—and she ends up in River Country, the campground’s long-abandoned water park, during its heyday.

And there—with its amusing fashion, “oldies” music, and primitive technology—she runs into familiar faces: teenage Dad and Mom before they’d even met. Somehow, Haley must find her way back to the twenty-first century before her present-day parents anguish over her disappearance, a difficult feat now that she’s met Jason, one of the park’s summer residents and employees, who takes the strangely dressed stowaway under his wing.

Seizures aside, Haley’s used to controlling her life, and she has no idea how to deal with this dilemma. How can she be falling for a boy whose future she can’t share?

First - I thought this book comes out on July 8th (according to Goodreads), but Amazon and basically everyone says June 17th?! I already reviewed all of my June review books last month, and I'm in the middle of my July pile (hence why this review is on June 16th, not in May). UGH. This bothers me so much, that my review of this book is posted "later" than I would like. Grrr.

Anyway. This book was cute. And very short. There wasn't much to this one, which was both nice and aggravating at the same time. I liked the atmosphere of this book - it was light and fluffy and problem-free, despite the tense parent-daughter current running through the book.

Haley does not like going to Disney's Fort Wildnerness, much less with her father, stepmother, and four-year-old twin step-siblings. She pitches attitude after attitude (I do not blame her), and one night, she is out with other teenagers when she has a seizure. She wakes up in 1982 - which is funny, because that is the year in which her parents met at Fort Wilderness.

So, time-travel, but with no gloom-and-doom-the-world-will-end plot. I was relieved to see this, because honestly, if this book were any less fluffy, I would have given it several stars less. The time-travel was interesting! Haley is so confused when she wakes up, but she meets Jason, who works at Disney, and he helps her out quite a bit. Between getting her food, new clothes, covering for her - he does a lot for her, with little to no questions asked. Hmm.

So there is the romance - and I liked Jason and Haley together. But obviously, it can't last, because Haley has to go back to the future, and Jason has to grow up. BUT, the romance in this book is so great. We also get to see how Haley's parents met - and Haley had a hand in that, funnily enough.

The ending was literally PERFECT. I wondered how things would be resolved - would Haley remember everything? Was it all a dream, or were there residual effects of Haley's actions in the past? Trust me, the ending is really great, not too heartbreaking, really nice. But read on.

While I liked this fluffy story, I was a bit disappointed with the story and the plot. The first part of the book, in the present, features Haley complaining about her father, and being at Fort Wilderness. She clearly does NOT like her stepmother. So, you'd think, at some point when Haley is in the past, or back in the present, that the whole parent-daughter issue thing would have developed or been resolved. But I was disappointed so see that, throughout the book, the "real life" issues weren't really mentioned. We know that Haley was mad at her father - that's the reason she gave Jason, when he asked where her parents were. But there really is no development of the most important plot, once Haley goes in the past. At that point, the romance is more important, and trying to stay away from Disney security.

So I was disappointed that there was no real substance to this book. I can't even say there was character development - I couldn't really tell if Haley grew as a character or not. Honestly, I didn't care too much, because I liked the fluffiness of this book. But you can be fluffy without lacking so many key story elements.

And tell me why a boy would give a random stranger money, clothes, food, help, etc., when he doesn't know her?! Don't give me the Good Samaritan spiel, I get that. But like, help her get away from authorities? Lose your job for her? Someone you met days ago? Nah nah nah. Not buying it.

Also, I wanted a better explanation for the time travel. A seizure, huh? Not good enough, in my opinion. I'm sorry, but I don't feel like stretching my imagination for this one.

Basically, there were inconsistencies and lacking elements that I couldn't overlook. I know I overlooked a lot of things in this book, because I liked how fluffy and light this book was (compared to what I usually read), but there wasn't enough in this book.

Ehhh, not really. If you already have an eARC or ARC, then go for it! But I wouldn't go breaking my neck to get a copy or read this one. It's not entirely worth it - there are much better books out there!

3 stars. This was a cute book. but not really my thing. At least it was super short - I read the entire thing in about two hours or less!