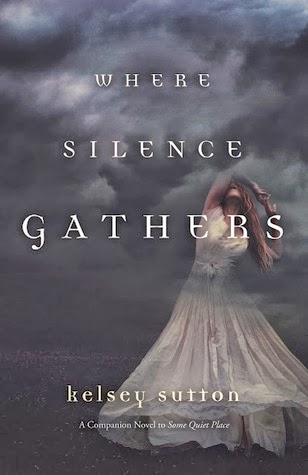 Seventeen-year-old Alexandra Tate sits outside Nate Foster's house, clutching a gun. After serving ten years for the drunk driving accident that killed Alex's family, Nate has been released from prison. Every night, Alex waits out of sight, building up the courage to exact her own justice. There's just one problem: Forgiveness.

Alex has been able to see personified Emotions for as long as she can remember, and Revenge is her best friend. But when Forgiveness suddenly appears, he offers Alex a choice—getting even or moving on. It's impossible to decide when Revenge whispers in one ear . . . and Forgiveness whispers in the other.

If you've been following me since last year, you'd know that I LOVED Some Quiet Place, the first novel in this companion series. There was something so beautiful and haunting about the novel. Sutton tackled many issues besides a paranormal story with some romance. There was a spark and flair to that book - which were missing in this book, unfortunately. Maybe I couldn't connect to the story as well. Let's explore.

Alex is grieving the loss of her parents and her younger brother - they all died in an accident six years ago. When the man who killed them in the car accident is let out of jail, Alex is hellbent on revenge. Revenge, her constant friend, is all for it. But then Forgiveness appears for the first time, and Alex is no longer sure of what she wants.

Alex's story is incredibly difficult, and sad. She is so determined to get revenge, to seek out vengeance, to destroy Nate Foster. She totally loses sight of herself and her future. Alex stops going to school, stops trying to be a good friend, stops trying to be a good adoptive daughter... she gives up on everything, except getting rid of Nate Foster. And trying to figure out if she's going crazy. Things start to unravel, involving her father. Secrets from the past that she might not want to know surface.

I can't say that I liked Alex (see the next section), or connected with her, or her story. I didn't really connect with Revenge either, or Forgiveness. I really felt for Missy and Saul, Alex's uncle and aunt. I was interested in knowing who was following Alex and why, and who was the real villain in the story. So I had a mild interest in the plot (but see the next section). There were a lot of things that I didn't like, in this book.

Again, I had a mild interest in the plot. Honestly, this book was a bit difficult for me to read and finish. I have to be honest - I was bored. I didn't really care about Alex, or her sob story of a life. I know that sounds awful, because she was still in her grieving stages or whatever, but I was not pleased with her behavior. But one thing at a time.

The plot and Alex's crazies are tied together. This book is really all about Alex and her revenge. I did not enjoy this plot. I didn't care much about Alex wanting to kill Nate Foster - it's so obvious from page one that she won't do it, at all, ever. It seems like this whole book is her harping on and on about wanting to get revenge, and throwing temper tantrums when she can't do it, and having pity parties left and right. Pathetic.

What's more pathetic is her behavior. I understand that she was going through grief, even though it's been six years... yes, death does get easier with time. But for Alex, to me, it seems like the deaths were recent. The author made the deaths seem recent, and that the deaths were affecting Alex very freshly. That made no sense to me. Their deaths occurred years ago. Her feelings shouldn't be SO fresh, so precise, towards the death. I don't know how to explain what I'm trying to say - trust me, it won't make sense to you either, once you read it.

Anyway, Alex is really pathetic. She keeps making the same mistakes over and over, hurting the same people over and over with her actions and words - and the sad thing? SHE KNOWS IT. She feels Guilt and Regret in like, every scene, yet SHE KEEPS DOING THOSE THINGS OVER AND OVER. Seriously?! Do you learn at all?! From cover to cover, it's like she's two years old and does not learn the first, second, third, or tenth time. I hate how fake she is - she acknowledges that she hurts someone like her friend Briana, but keeps hurting her, maybe even in different ways. What a complete and utter b****.

Moving on to connecting with characters and the story in general. Yeah, I could not connect to Alex. I was very detached from her and her story. I couldn't feel for her, I couldn't like her (she's NOT someone I would get along with in real life), I couldn't like her (sob) story. I didn't connect well with Revenge or Forgiveness as well. I LOVED Fear in Some Quiet Place. I felt like he was very well-rounded and fleshed out in that book, with lots of page-time. In this book, I feel like I didn't know Revenge at all - or Forgiveness. So I didn't care about either of them.

The romance - there is a love triangle, of a sort. Ew. Ick. Yuck. No. I liked Revenge more from the beginning, because he's the "bad" emotion, of the two, and the "bad' ones are HOT. But honestly, I could care less which one Alex liked more. And the romance is kind of bland, anyway. It doesn't feel THERE, in my opinion. And the ending, in terms of the romance, is weird. Whatever.

I didn't really follow the story well, in terms of the father's past and who was following Alex and whatnot. It's all connected, but I was like, meh, the whole time. In Some Quiet Place, I was dying to know what was wrong with Elizabeth. In this book? I didn't really care what was "wrong" with Alex, or what her father had to do with anything. Meh meh meh.

I'm so disappointed in this book. It was nothing like the first book, in a bad way. It didn't have the spellbinding quality that sucked me into the first book. The romance didn't leave me breathless. I didn't care about any of the characters, or the story. How sad!

If you read Some Quiet Place, you should definitely read this one. I read and LOVED the first book - it was one of my favorite books of 2013, earning a rare 5 stars from me. This book might be a bit of a letdown for you as well, if you also really loved the first book. Or it might not be, who knows. Just be warned.

2.5 stars -> rounded down to 2 stars. This book didn't have the magic and spark that Some Quiet Place had, unfortunately. It was disappointing, really, but I'm still glad I read it.