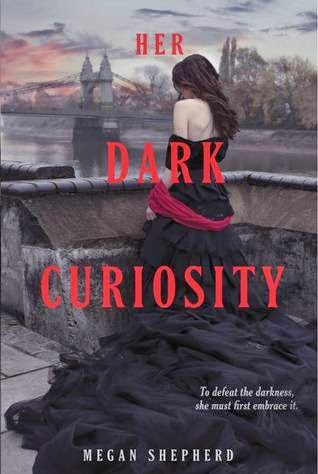 To defeat the darkness, she must first embrace it.

Months have passed since Juliet Moreau returned to civilization after escaping her father's island—and the secrets she left behind. Now, back in London once more, she is rebuilding the life she once knew and trying to forget Dr. Moreau’s horrific legacy—though someone, or something, hasn't forgotten her.

As people close to Juliet fall victim one by one to a murderer who leaves a macabre calling card of three clawlike slashes, Juliet fears one of her father’s creations may have also escaped the island. She is determined to find the killer before Scotland Yard does, though it means awakening sides of herself she had thought long banished, and facing loves from her past she never expected to see again.

As Juliet strives to stop a killer while searching for a serum to cure her own worsening illness, she finds herself once more in the midst of a world of scandal and danger. Her heart torn in two, past bubbling to the surface, life threatened by an obsessive killer—Juliet will be lucky to escape alive.

Believe it or not, I have a positive opinion towards this book. You'll see my next section, with the dislikes, and probably think that I absolutely hated this book. Not the case. I enjoyed it. I was interested throughout the book, even if the overall plot was cyclical. The events in this book kept my interest, even if some pissed me off. The romance was horrendous, but I think things get resolved at the very end of this book. ONE CAN HOPE.

Juliet has returned to London, but she is getting weaker and weaker, since the injections are working as well as they used to work. As everyone should have expected, Edward appears in London, and he needs her help. He can barely control his monster side, a side that wants Juliet, a side that Juliet is attracted to. But Juliet is determined to create a cure for herself, and for Edward. Even though she loves Montgomery, he's not there, and Edward is, so everything is all about Edward.

I'm a little bit cynical when it comes to Edward. I don't like him at all, as a character, and as a love interest. He's a creature, an abomination, and he shouldn't exist. I wish someone would just kill him already! Meanwhile, I really like Montgomery, and not just as a love interest. He's definitely the better man in this book, even if Shepherd wants readers to think that he is "bad" or "has secrets" or has "done terrible things", or whatever cliches authors invent to make decent people seem "bad".

I wasn't a fan of Juliet in this book - she had a little more backbone in the first book. However, if things go a certain way in the third book, I'll overlook her poor character in this second book. Sequel slump, you know? Although, I gave this book and the first book the same rating. But technically, books in series should get better and better, right?

Anyway. I did enjoy the plot of this book (not necessarily the series' plot). I was curiously as to who was doing the killings - even when we think we know who was doing them, it seemed like more than one person was killing in London. And all of the digging into Juliet's father's past was interesting. I'm curious as to how Shepherd will use all of this past knowledge in the third book.

I am looking forward to reading the third book, after this book's ending. If this book hadn't ended the way it had, then I would not be looking forward to reading the third book. This book was mediocre at best, hence the rating. 2.5 stars was my original rating, but I'm giving it 3 stars because of the ending. Please let certain things happen and the love triangle be resolved. Please please please.

While my opinion of this book was overall pretty positive, there were still some things that I didn't. For one, I feel like the skeleton plot of this series is going in circles. Juliet is questioning her humanity, her sanity, her romantic feelings, her past, her being like her father. It gets tiresome, the woe-is-me attitude, the romance drama, the back-and-forth human/monster dilemma thing. I feel like nothing ever gets resolved, in any of the books. I understand that this book is part of a series, but each book could resolve something.

For example (and this might spoil things for book one, if you have not read it yet), how do we know if her father is really dead? How do we know if Edward is really going to die, or even Juliet, because of their animal attributes? Because I know Megan Shepherd LOVES her stupid little love triangle in this book, and so she wouldn't possible have Edward die. No, Juliet is going to be a hero and save the day by creating a cure for herself and Edward. And then she'll really have to choose between her and Montgomery.

Everything goes back to the romance in this book. Why would Juliet agree to help Edward? Where did Edward comes from, to begin with? OF COURSE he survived from book one. We can't just have someone important and a part of the love triangle die, can we? Is there no such thing as tragedy in books anymore? And why does everything have to be planned so that we get the "perfect" love triangle, waiting to be resolved in book three? Gosh I hate love triangles. I hate them so much.

The sad thing is, Juliet knows that she doesn't LOVE Edward like she loves Montgomery. She knows that her animal side is attracted to Edward, but she really LOVES Montgomery. Yet she keeps being an insecure pansy who doubts that Montgomery loves her, that she loves Montgomery. She's the equivalent of a modern-day bimbo floozy, in my opinion. Her knowledge in science and medicine isn't even that great, from what I saw in this book. STOP VACILLATING. Stop making dumb, rash, thoughtless decisions, like consorting with the wrong people. As "smart" as Juliet is supposed to be... she acts really dumb in this book.

So. I didn't like the romance, UNTIL Montgomery reappears. You knew he was going to come back. If Edward did, he would too. Once Montgomery was back, I breathed a little. Especially at the end. Although the end just sets up everything so that Juliet will throw herself into creating a cure for Edward. Montgomery will be jealous and angry, because he thinks it's a waste of time to try to help something that is an abomination, that shouldn't exist. AMEN. WHY DOES JULIET WANT TO SAVE EDWARD. He's a creature, a monster, something that shouldn't exist. He's no one's blood relation, not a human being, nothing. UGH.

Um. If you read the first one? Then yes, it is worth reading this sequel novel. Especially if you're a fan of Montgomery or Edward, in terms of the romance. By the end, things get pretty clear, in terms of the romance. This is a love-triangle-based series, so I know how important romantic decisions are. Heck, I'M glad the love triangle is (hopefully) resolved. I hate love triangles.

If you haven't started reading this series, hold off. Don't start reading until the third book comes out - or maybe don't bother at all. Especially if you absolutely hate love triangles. Because this love triangle might survive into the third book, who knows. It shouldn't though.

3 stars. I think I liked this one about as much as I liked the first book - even though the ending of this one made me super pleased. These books have a way of balancing the good and bad, into a nice middle-of-the-road 3-star mixture. I cannot wait to read the third book, because of the way this one ended!