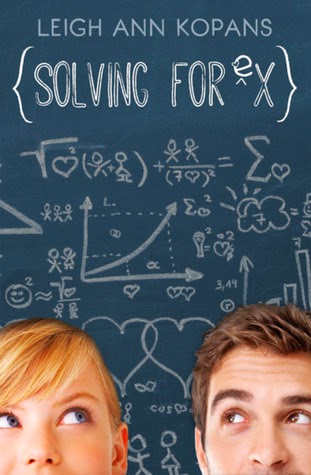 Ashley Price doesn’t have much in life after being bullied so hard she had to leave her old school to live with her aunt and uncle in Pittsburgh. But the camera she borrowed from her best friend and secret crush Brendan, and her off the charts math abilities, make things a lot more bearable. Plus, since Brendan is the captain, making the school Mathletes team should be easy.

But when gorgeous new girl Sofia rolls in and steals Brendan, Ashley's place on the team, and her fragile foothold on the Mansfield Park Prep social totem pole, it’s on. Sofia is everything Ashley left her old school to escape. The only thing Ashley didn’t count on is Sofia’s sexy twin brother Vincent.

Vincent is not only the hottest boy in school, he’s charming, sweet, and he’s got his eye on Ashley. He’s also not taking no for an answer. There's no real reason Ashley shouldn't like Vincent, but with the battle lines being drawn between her and Sofia, Ashley’s not sure which side he’s on. Or which side she wants him to be on.

She does know Sofia is trouble with a capital T, and she’s determined to make Brendan see it.

SOLVING FOR EX is a YA contemporary romance that remixes Mansfield Park as Clueless meets Mean Girls in a crazy mix of high school society, mathletic competition, and teenage romance.

This book came highly recommended to me by a good friend, Pili of In Love with Handmade! I know, I know, my rating for this book is pretty poor. This is one of those books that you think you'll absolutely love, try so hard to love it, and ultimately, don't. I thought the romance and the mathy premise would be enough for me to love this one, but there was so much more to this book, in a good and bad way.

Ashley has been in love with Brendan since she moved to Mansfield Park a year or two ago, but he is so clueless, it's unreal. Then twins Sofia and Vincent move to Mansfield Park. Sofia immediately latches on to Brendan, taking all of his attention from Ashley - and taking Ashley's spot on the Mathletes team as well. Vincent, on the other hand, seems genuinely taken with Ashley. Shouldn't all end well? Well, no, because Ashley is wary of Vincent, hates Sofia, and is still painfully in love with Brendan.

The first half of this book really interested me - I couldn't take my eyes away from the pages! The first half dealt with the arrival of Sofia and Vincent, and how Brendan and Ashley reacted to the twins. I liked seeing Ashley get jealous of Sofia, but then I liked seeing Ashley spend time away from Brendan. Brendan is so clueless, but occasionally he'll notice that his best friend isn't hanging off his arm anymore.

I liked the romance up until it started getting annoying, which I know is really vague, but if you read this one (which you probably won't), you'll see what I mean. I liked Vincent and Ashley together - he seemed genuine and kind and a little too perfect. But towards the end, I was sick of everyone.

I didn't like the end. Read on for more.

The characters, the romance (overall), the ending. Three huge things that were really, really bad in this book. Totally ruined this book.

I'll start with the characters, and with Ashley. I didn't dislike Ashley, to be honest. But I found her a bit flaky, and she definitely strung Vincent along, in my opinion. If I were in her position, I might have used Vincent a little, to make Brendan jealous, just as Ashley did. But not to the point that Vincent might have started wanting more. Hanging out is one thing. Driving hours to see the other is another thing entirely.

I flat-out hated Brendan. What. An. Idiot. I don't dislike him for not noticing that Ashley loved him or whatever. No, I didn't like him because he is so stupid! I think this is the way the author developed his character- it was so poor. Brendan seemed TOO perfect in the goofy, sweet, clueless guy way. I've never met a person even close to what Brendan seemed to be like (and that's saying something, being a teenage college student around thousands of people). I think his character was underdeveloped, because it seemed like Brendan lacked substance. Or maybe that was supposed to be part of his "appeal".

Hated Sofia. Liked Vincent until the author seemed to force bad things down his throat. It was so forced, the way the author tried to turn Vincent into the "villain" with Sofia. Sofia, I could see being sadistic and twisted. Vincent, I couldn't. The author really forced his flaws and "bad deeds" into the story. So badly done.

Literally everything about the ending was poor. The romance SUCKED BALLS (pardon my language). I am SO ANGRY that everything ended cookie-cutter perfect for Ashley and Brendan. I think it must really difficult for authors for make a story in which one best friend is in love with the other, and the other one is NOT in love with the other, nor does he realize that he is, because he NEVER IS. WHY is that so difficult, or so unused?! I seriously rooted against Ashley and Brendan the entire story, even though part of me knew what was coming. Cue the vomiting. How cliche. ESPECIALLY when the author started incorporating all the negative things that made Vincent seem like a bad person. Horrible foreshadowing, awful decomposition of a character, and unbelievable destruction of the romance.

As much as I love a good romance, I'm quite cynical when it comes to romance. Why can't Ashley be with no one? Or neither Vincent nor Brendan? What's wrong with being solo? Or moving back to her old town? Or something else. Ugh. When I finished this book, I probably had the biggest WTF expression on my face. I'm not sure what was going on with this book, but whatever it was, it wasn't well-created.

Hmmm, not really. Honestly, I would have passed this one straight if Pili hadn't recommended it! And it was something that I totally thought I would enjoy (brainy heroine, unrequited love with the best friend, new guy, and math math math!), but I didn't. And that's okay! But I suppose that could serve as a warning.

2 stars. Nice try. I enjoyed half of this book, but the second half killed everything, literally obliterated any chance of me loving (or even liking) this book. Which is really sad for me. And for those of you wondering about the recommendation - fear not! Pili recommended Pivot Point by Kasie West next, and I am really excited for that one! Catch my review next month!