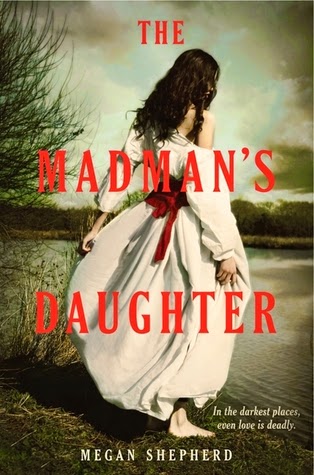 Sixteen-year-old Juliet Moreau has built a life for herself in London—working as a maid, attending church on Sundays, and trying not to think about the scandal that ruined her life. After all, no one ever proved the rumors about her father's gruesome experiments. But when she learns he is alive and continuing his work on a remote tropical island, she is determined to find out if the accusations are true.

Accompanied by her father's handsome young assistant, Montgomery, and an enigmatic castaway, Edward—both of whom she is deeply drawn to—Juliet travels to the island, only to discover the depths of her father's madness: He has experimented on animals so that they resemble, speak, and behave as humans. And worse, one of the creatures has turned violent and is killing the island's inhabitants. Torn between horror and scientific curiosity, Juliet knows she must end her father's dangerous experiments and escape her jungle prison before it's too late. Yet as the island falls into chaos, she discovers the extent of her father's genius—and madness—in her own blood.

Inspired by H. G. Wells's classic The Island of Dr. Moreau, The Madman's Daughter is a dark and breathless Gothic thriller about the secrets we'll do anything to know and the truths we'll go to any lengths to protect.

Well, this book was not what I expected. I remember exactly what I thought when I finished it several hours ago - that wasn't so bad! I read many negative reviews about this book, and those reviews turned me off. Needless to say, I still gave this book a shot, because I have a copy of it, and book two! This book wasn't amazing, but I certainly didn't hate it (like I thought I would).

Juliet has been living the life of a lady fallen on hard times, ever since her father died, and her mother died shortly after. Years later, she still works as a maid at King's College. She knows a little about medicine, so when she stumbles upon students doing a vivisection, she is horrified. Not only is she disgusted, but she is surprised to see that on the bottom of a diagram of the vivisection is her father's name. Then she stumbles upon Montgomery, who used to be her family's servant's son. Suddenly, Juliet's life has changed drastically, and she's aboard a ship with Montgomery, heading to her father's island. Yep, her father is alive, and his work isn't exactly... ethical. Throw in a random castaway, Edward, and we've got quite a story.

One thing that I would like to GUSH about is the writing. Oh my gosh, the writing in this book is stunning. I can't quite explain it - it's lyrical, almost. Shepherd has an excellent writing style, and every now and then, I'd physically stop reading to appreciate a line or two. The imagery, the descriptions, the dialogue - so well-written, so put-together.

The story is so strange. Some call it creepy, and I can totally see that. Vivisection is the process of dissecting something while it is still alive - creepy, no? A lot of that happens in this book. SO MUCH CREEPINESS. Doctor Moreau really is insane, and his work is horrifying. Yet, it's brilliant. I would never, ever want anything like what he was doing to be done, but his work is brilliant. Terrifyingly so.

Once Juliet is on the island, it's not hard to figure out what is going on. Things aren't necessarily predictable, but you can generally figure out what will happen, and what Doctor Moreau is doing. But Shepherd keeps things very interesting - especially for such a "long" book. She keeps things creepy, too. Every time Julie went into the jungle, I feared for her. I held onto the book for dear life!

I thought I would hate Juliet, mostly because of what I'd heard about the romance. Much to my surprise, I didn't hate her. I'll get to the romance later, but as far as I can tell so far, she's a likable heroine. A tiny bit anachronistic, but that's understandable, since she's not a lady anymore.

Read on, for dislikes! There were several.

The romance is going in the dislike category, because yes, there is a love triangle in this book. I hate love triangles, and I especially hate how Shepherd forced this one in there. Why can't we just have Montgomery? Why is Edward a factor? Can't Edward have a platonic friendship with Juliet? How and why did he instantly fall in love with Juliet? Ugh. Team Montgomery. I liked the passion between Montgomery and Juliet, but it seemed like that same passion existed between Edward and Juliet, which I didn't like. It was almost like the chemistry was interchangeable, between the two men. The difference was that I liked seeing it with Montgomery, but not with Edward. With Edward, things seemed weird.

So the romance lost this book a couple stars. Romance is important, even when it doesn't seem important.

I'm struggling a little bit with the science behind Doctor Moreau's creations. I don't really understand how any of it is possible - it's hard to picture, and to wrap my head around. How does combining a bunch of random things make what he was making? Sorry, I'm trying to be vague, so as not to spoil anything. I'm a student of science, and I need a little more in terms of explanations and evidence, to really believe what Doctor Moreau was doing was physically possible.

The ending is going in the dislike category. Not going to lie, I flat-out hated it. Thank goodness I have the sequel on my bookshelf over there somewhere. But then, is the sequel also going to have such an ending? Because the third book comes out in January 2015. That's a long time from now.

Hmmm, a tough one. If you weren't dying to read it, then don't read it. If you have a copy, give it a shot. If you love gothic historical fiction, definitely read it. The writing style is so so so good - the best aspect of the book. And in my opinion, the creep factor is pretty big. The romance is a bit disappointing, because I hate love triangles, but we'll see about book two.


3 stars. Right in the middle. I hope book two will be better. I'm not totally convinced though, because like with book one, I've heard awful things about book two. I'm still going to read it. *braces self*