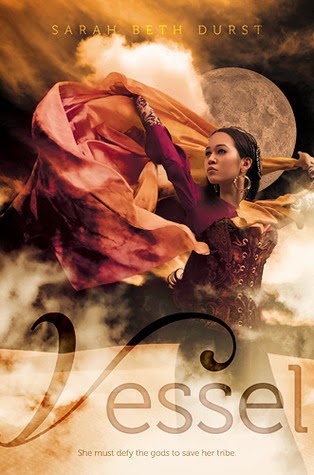 Liyana has trained her entire life to be the vessel of a goddess. She will dance and summon her tribe's deity, who will inhabit Liyana's body and use magic to bring rain to the desert. But when the dance ends, Liyana is still there. Her tribe is furious--and sure that it is Liyana's fault. Abandoned by her tribe, Liyana expects to die in the desert. Until a boy walks out of the dust in search of her.

Korbyn is a god inside his vessel, and a trickster god at that. He tells Liyana that five other gods are missing, and they set off across the desert in search of the other vessels. The desert tribes cannot survive without the magic of their gods. But the journey is dangerous, even with a god’s help. And not everyone is willing to believe the trickster god’s tale.

The closer she grows to Korbyn, the less Liyana wants to disappear to make way for her goddess. But she has no choice--she must die for her tribe to live. Unless a trickster god can help her to trick fate--or a human girl can muster some magic of her own.

Can I just say "everything" and be finished? Yes? Please. Because seriously, this book was THAT GOOD. I was shocked that I liked it that much. I had a feeling that I would enjoy it, but LOVE? Five stars? Wow. This book blew me away, in the best of ways. The gods and goddesses thing had me kind of skeptical, because I generally don't enjoy books that deal with deities. I don't know why. But I really, really liked this one, as you can see.

Liyana has been exiled by her clan, because on the day of the summoning ceremony, Liyana danced, but her goddess did not come and inhabit her body. Liyana is left alone, with the desert heat on her back and sand wolves for companions (companions that try to kill her... wonderful). Korbynn, a god-inhabited vessel, shows up and tells her that five gods have been stolen, unable to inhabit their vessels (like Liyana). Korbynn and Liyana set out to find the other vessels, and then find the stolen deities. But so much more is at stake. The emperor wants to take the desert people under his control, but the desert people don't want this. And the Great Drought is still the entire empire. Mama mia!

First, I LOVE the world-building in this book. I love what Durst has created. This fantasy world is splendid, superb, amazing, fabulous, insert super positive adjective here. I could practically see, feel, touch the desert that Durst has brought to life. Everything so perfectly pieces together to make the world in which Liyana lives - the vicious sand wolves, the deadly sand worms, the scarcity of water, the intense sandstorms... Durst evokes the presence and essence of the world and setting beautifully.

The culture is so rich in this book. The lore and history is deep and all-encompassing and so, so crucial in this novel. At first, I was like, ugh, another story. But every story that Liyana tells has its purpose. Also, it helps to give an even better feel of the world and culture of the Goat Clan, and desert people in general. The gods and goddesses have such a large place in the lives of the desert people. I'm impressed with how well Durst displays the importance of the gods to readers. The gods are EVERYTHING to Liyana, and to her people. Liyana is willing to die and give her body to her goddess, Bayla, even when she tastes freedom, when Bayla does not come during the summoning ceremony. Incredible.

I LOVE Liyana. She is actually one of my favorite YA heroines. She has some serious spunk, grit, voice. The thing is, she's not over the top with her spunk. She is practical yet fierce, careful yet bold. She is extremely intelligent. I feel like she and I would get along really well, if she were an actual person.

I love the supporting characters as well. There are so many! Korbynn, the god who is actually inhabiting his vessel (he is also the lover of Bayla), Jidali (Liyana's little brother, who she thinks of very often), Fennik, Pia, Raan (vessels for their deities), the emperor. I have to say, I LOVED Korbynn right from the start, and the emperor, and Raan. They are my favorite supporting characters.

You are probably wondering about the romance. If Bayla and Korbynn love each other, and are lovers, where does that leave Korbynn and Liyana? It's not hard to see that Liyana will develop feelings for Korbynn, and vice versa. But Liyana is Bayla's vessel, and will die as soon as Bayla inhabits her body. Well, you'll have to read this book to figure out what happens in the romance. Personally, I LOVE what Durst did. I love the male interest so much, as a love interest and as a character with a pivotal role in this book. There is no real love triangle in this novel, if anyone was wondering. Don't believe people if they say that that's the case (I have no idea what people are saying, but I feel like that could have been something mentioned).

I kind of loved everything about this book. The story is so intricate and beautiful. You'd think that for a "long" YA novel (I don't think it's that long) that it would drag a little, or the pacing would be off somewhere. That was certainly not the case in this book. I loved all four hundred and some pages of this book.

So basically, you should read this book. Like right now. Forget whatever you're reading. This book got FIVE STARS from me, Alyssa, resident harda** when it comes to reading and reviewing and critiquing and picking things apart. So. There's that. Now off you go.

I can't think of anything specific to say in this section, but I'll update it if something comes up. Which probably won't happen. But you know.

YES! Whether you're a fantasy fan or not, whether you can't sit through "long" books or not, this is definitely a book for anyone (in my opinion). There is amazing world-building, an interesting story, tons of fascinating characters, and a lovely romance. I'm thrilled to have had a chance to read this book - the culture and world was enough for me to fangirl all over the place. YES, I RECOMMEND THIS BOOK!

5 stars. Oh my goodness. I loved this book so much. I'm actually angry at myself, for having a copy of it for nearly two years, and not reading it until now. This is an incredible fantasy novel. And I have a signed copy, yay! That makes me incredibly happy. Go get a copy for yourself, trust me on this!