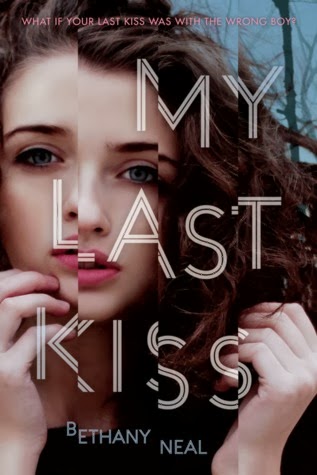 What if your last kiss was with the wrong boy?

Cassidy Haines remembers her first kiss vividly. It was on the old covered bridge the summer before her freshman year with her boyfriend of three years, Ethan Keys. But her last kiss--the one she shared with someone at her seventeenth birthday party the night she died--is a blur. Cassidy is trapped in the living world, not only mourning the loss of her human body, but left with the grim suspicion that her untimely death wasn't a suicide as everyone assumes. She can't remember anything from the weeks leading up to her birthday and she's worried that she may have betrayed her boyfriend.

If Cassidy is to uncover the truth about that fateful night and make amends with the only boy she'll ever love, she must face her past and all the decisions she made--good and bad--that led to her last kiss.

A contemporary novel set from the perspective of the dead heroine - weird, right? Cassidy is dead, but she's a ghost. She remembers nothing from the night of her death, but she knows it wasn't a suicide (like everyone thinks it is). Someone pushed her into the ice-cold river. Dead Cassidy is determined to know what happened to her, and so is Cassidy's friend Aimee, and Cassidy's boyfriend Ethan. Ethan can see ghost Cassidy, but no one else can. Really weird, right?

This book is a mystery, and it flips between present and past. Actually, ghost Cassidy is pulled between past and present. One minute, she's in the present, one moment, she's being sucked into the past. Slowly, she gets pieces of her memory back, one by one. By the end of the book, she is able to figure out how she died, and all of the events leading up to her death. It's not as simple as someone pushing her. There are many factors, many players, many motives.

That was definitely one of the things I liked about this book - the complexity of the entire situation. The blame is on just about everyone, even though only one person is responsible for Cassidy's death. One girl was in love with Ethan, and wanted to sabotage Cassidy and Ethan's relationship. One boy wanted to protect his best friend's heart from getting broken by Cassidy. One boy was in love with Cassidy, except he couldn't be, because Ethan is in love with Cassidy. And Cassidy herself, dallying with another boy. Complex, intricate, fragile...

The mystery kept me going, if anything. I wanted to know what happened to Cassidy. But after a while, things seemed to go in circles, and I just wanted to know who did it. Information seemed inconclusive, or unimportant. So, I finished this book, but I had issues with it.

Like I mentioned above, I had problems with this book. The plot seemed to go around and around, the mystery getting stale and boring. I WANTED to know the story behind Cassidy's death, and how each person played a role in her death, but this book kept going in circles. Scene after scene, the information presented seemed useless. Nothing really showed anything important to solving the mystery.

Not until the very end. In the end, everything is revealed, and it's like a huge info dump. I still don't fully understand everything that was revealed at the end, and quite frankly, I don't care enough to re-read the end and figure it out. I'm sorry if you might have wanted me to do that.

I already know that I would not like the heroine, Cassidy, if she were a real person. I would probably hate her a lot. She seems like the stuck-up type, that gets whatever she wants without having to work hard to ask or do anything. The sense of entitlement, it's strong with this girl. What she did with and to Caleb was wrong. And the same, with and to Ethan. I really didn't like Cassidy - I found her annoying. Of course, I wouldn't wish death on anyone, but ugh, even in death, I wasn't a fan of her.

It's hard to like a book if you didn't really like the protagonist, or the plot. Again, the mystery was cool, but when it started going in circles, I sort of shut down. I wanted to know what was going on, what had happened, and that wasn't being revealed. Even in the end, it was confusing. THAT IS ANNOYING.

Also, please explain to me why Ethan is the only one that can see Cassidy? No explanation was given. You couldn't make one up? Like, Ethan and Cassidy are soul mates, or something. Absolutely no explanation was offered, and I have more of a problem with the lack of explanation, than whatever possible explanation the author could have offered. If that makes sense.

Hmm, not really. If you already have this book, then read it! If you were already super excited to read it, then go for it! But if you were on the fence, or didn't have much interest to begin with, then don't bother. It isn't a must-read, or the next bestselling novel (that I can see, anyway. I could be wrong).

3 stars. This was an interesting book, and I enjoyed reading it, but I wouldn't read it again. The mystery was intriguing and puzzling, but this book wasn't amazing or mind-blowing or THAT GOOD, unfortunately.