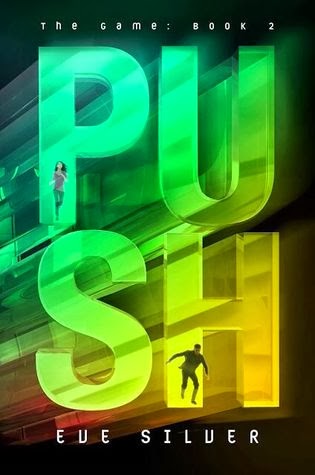 It’s either break the rules or die.

Miki Jones lives her life by her own strict set of rules, to keep control, to keep the gray fog of grief at bay. Then she’s pulled into the Game, where she—and her team—will die unless she follows a new set of rules: those set by the mysterious Committee.

But rules don’t mean answers, and without answers, it’s hard to trust. People are dying. The rules are unraveling. And Miki knows she’s being watched, uncertain if it’s the Drau or someone—something—else. Forced to make impossible choices and battling to save those she loves, Miki begins to see the Committee in a glaring new light.

And then the Game crosses a new boundary, pushes harder into Miki’s and her friends’ lives, and there’s nothing in the rules that can save them now.

If you've been following me blog for a while, you'll know that last year, when I reviewed the first book, I basically screamed at everyone to read it because it was THAT FANTASTIC. Rush was easily one of my favorite books of 2013, and I was literally dying to read Push. The cliffhanger in book one broke my heart into a thousand pieces... but I knew for a fact that it couldn't last, that there must be more to it then we are lead to believe. Fast forward to now, and, well, now I need book three. Like, at this very moment.

This book starts right where the last book ended - in which Luka and Miki respawn out of the Game. Miki is confused, hurt, and seriously panicked. Her friend Carly has no idea what is going on, but Luka and Miki manage to cover their - and Jackson's - tracks without Carly getting suspicious. But Miki is determined to find Jackson, especially since Carly remembers his existence. But a greater threat is at hand - the Drau may be close to breaking through to the human world, shells and full Drau.

The first thing on everyone's mind is: what happened to Jackson?! Well, of course Eve Silver wouldn't kill him off. That would make zero sense, honestly. He's not just a love interest, he's a protagonist, and a really good Leader in the Game. So... if you're one of the fans that died a little when Rush ended, fear not! Jackson's fine. Sort of. He appears in this book, I promise. I hope no one's too upset about me saying that though. If that's a deciding factor for someone (whether or not Jackson is in this book), then I'd say keep reading, because he is NOT dead.

A good portion of this book is concentrated on Miki's brokenness about Jackson's disappearance, and her resolve to find him. She and Luka don't know how or where to look, but they are determined to make sure he is found. Meanwhile, Miki must lead other missions with the team, much to her dismay. She misses Jackson's leadership skills, which he seemed to carry with ease. I miss him too, don't worry.

The other part of this book deals with the Drau, especially since Jackson is back to help deal with them. Something eerie is going on, and the Committee doesn't exactly seem to be the helpful authority on things. Miki thinks she is going crazy when she starts seeing Jackson's sister in the Game, but she isn't - the Committee is telling her that she is seeing things. The Drau keep gaining the advantage. It seems like the teams can't win, no matter how hard any of them try.

I really like the way that this book took the series (or is taking the series). It has become more about destroying the threat of the Drau, than just each mission. Survival for the world, not just survival of the Game. I was completely sucked into the plot, and I definitely want to know what comes next. This book almost read like a singular novel, except for the fact that it continues a story, and must keep being continued. There were no slumps or awkward pacing - yay!

You already know I love Jackson. We see less of him overall in this book, but that's okay. He's still his wonderful, cranky self. Miki is still her controlled, kickbutt self. The supporting characters are pretty great, even if there are some that are a bit sketchy (on purpose). NO LOVE TRIANGLE, thank goodness. No new characters who might function as a leg of a love triangle. No weirdness.

I must say, I am quite pleased with this book! I think I liked Rush more than I liked Push, but that's not to say that I didn't enjoy this book. Rush took my breath away, and Push came pretty close to doing the same. I cannot wait to see how it all ends!

While I loved this book, I felt like it could have skipped altogether. You know when you read a trilogy and one of the books (usually it is the middle of the three) seems like a filler novel? I wouldn't go as far as to say that this is a filler novel. But if the author made book one slightly longer, and book three slightly longer, we wouldn't need this book at all. It's sad to say, because there are certain scenes in this book that I LOVE, but this book wasn't entirely necessary to read, to know what is going on. Really, it's more about hyping up the cliffhanger at the end of book one. Book one could have easily gone straight to book three. Not that I know the contents of book three.

4 stars. What an amazing sequel! I cannot wait to see how it all ends. Must. Know. Now. Or as soon as possible. This is definitely going to be a favorite series, I can feel it!