Review: The Truth About Alice by Jennifer Mathieu 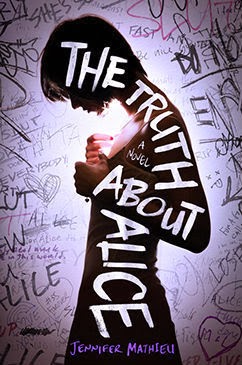 Everyone knows Alice slept with two guys at one party. When Healy High star quarterback, Brandon Fitzsimmons, dies in a car crash, it was because he was sexting with Alice. Ask anybody.  Rumor has it Alice Franklin is a slut. It's written all over the "slut stall" in the girls' bathroom: "Alice had sex in exchange for math test answers" and "Alice got an abortion last semester." After Brandon dies, the rumors start to spiral out of control. In this remarkable debut novel, four Healy High students tell all they "know" about Alice--and in doing so reveal their own secrets and motivations, painting a raw look at the realities of teen life. But in this novel from Jennifer Mathieu, exactly what is the truth about Alice? In the end there's only one person to ask: Alice herself.

Wow. What a book. I struggle with "tough-issue" contemporary novels, and this one is just about as tough as they come. I'll preface this review by saying that this book actually does NOT involve rape, which is what I initially thought. It actually involves hearsay and gossip, but at the most extreme and cruel measures. Maybe that is one of the reasons why this book worked so well for me? Because it didn't have to do with rape and how the heroine handled it? I don't know, I don't have answers. But I really liked how this book was structured, how the issue was brought about. Let's explore, shall we?

This book features the perspectives of several different characters: Elaine, Kelsie, Josh, Kurt, Alice... I think that it. Elaine is the Queen Bee of the Healy High, the most popular girl, the Regina George. Kelsie is Alice's best friend - until the incident. Josh is Brandon's best friend. Kurt is the super nerdy weird guy that talks to no one. Alice is, well, Alice is the girl that is accused of sleeping with both Brandon and Tommy at Elaine's party. Elaine and Brandon are on and off. Kelsie is in love with Tommy. Kurt has always had a crush on Alice. Alice has a sliver of history with Brandon (they kissed in eighth grade). Josh cares about Brandon more than anyone realizes.

And therein lies the problem. Alice didn't sleep with anyone that night, much less two guys at the same. But rumors spread (stemming from Brandon) that she did. He started the rumors because she refused to sleep with him, and Tommy didn't care because Tommy was weeks away from going to college. Then Brandon dies. Josh was in the car with him, and Josh told everyone that Alice had been texting dirty things to Brandon, distracting him while driving. Elaine is happy to go along with whatever rumors, because Alice slept with her sort-of not-really boyfriend (allegedly). Kelsie spreads rumors that Alice had an abortion, because secretly Kelsie was angry at Alice for her looking down on her for still being a virgin (which Alice did NOT do, just saying).

Confusing, no? Or maybe not confusing, but tragic. Really, really SAD, in a I-pity-you-all-because-you-all-are-just-that-horrible-and-cruel-and-worthless. The thing is, we get to see all of the "bad guys'" perspectives. I feel bad for some of them, and others, no. Kelsie feels guilty for spreading the fake rumor about Alice having an abortion. She did it out of selfish, vengeful reasons, but you can FEEL her indecision about things. I like how the author did that - made the reader hate those cruel characters, but at the same time, show you why they did it.

I sort of feel bad for Josh too, but less so. Same with Elaine. The thing is, none of these characters said or did anything maliciously, except Brandon, and honestly, I hate to say it, but Brandon may have deserved it. Maybe not to die (though he did die), but he deserved some sort of retribution. That sort of rumor, that a girl slept with a guy (or two or three or a thousand) is HORRIBLE. For a guy, if someone says that Jimmy slept with Girl A, B, and C, everyone would say he's such a player, or he's ballin, or ooo, kill em, Jimmy! But if a girl does that, or a watered-down version of that, or anything close to that, she is immediately slut-shamed.

I think that is one of the reasons why I really liked this book - the issue isn't rape, but it is something prevalent and relevant in a teenager's life. I can't tell you numbers or statistics as to how often these things happen (I feel like that would be difficult to gather information on such an issue), but it happens. So maybe you don't think rape is relevant to you. But this issue - spreading rumors about someone's alleged promiscuity really could be.

Nevertheless, I really enjoyed this book. I like that it was told by basically everyone else, except at the very end. This story was developed very different than most, as it was told by many different characters, in which each character told their view of things, switching back and forth. We see more of the aftermath than anything else, but everything is really well-developed. Definitely check out this one if you can!

I can't think of anything specific that I really just did NOT like in this book... maybe I wanted a more satisfying ending. Don't get me wrong, I think the ending is fitting and well-developed, but nothing was really, um, resolved in this book. I don't want to give anything away, but no action was taken. Of course, in real life, that kind of thing happens (or does not happen, actually) all the time. But it was bittersweet to read.

You all know me. And if you don't, here's the thing: I generally dislike "tough-issue" contemporary novels. This year, I've resolved to at least read MORE of them, to give more of them a chance, so that I can't say that I hate them all when I've only read like three or four in my life.

So. My point to all of that. I liked this book a lot! And this is coming from the girl that generally does not like contemporary "tough-issue" novels. So if you regularly enjoy contemporary novels, especially "tough-issue" ones, then you will probably enjoy this book! But there is a good chance that you'll enjoy it anyway, contemporary fan or not. Just saying.

4 stars. What a touching, moving novel! I'm really glad that I downloaded this one, on a whim. I wasn't planning on reading this book, but it was definitely worth it. I seem to be getting better with these "tough-issue" contemporary novels!