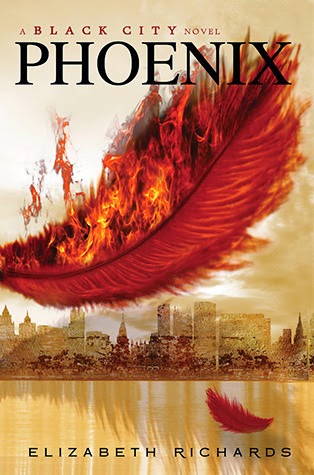 Ash and Natalie are just starting to build a life together when things in the United Sentry States go from bad to worse. Ash and Natalie find themselves at the center of turmoil when dictator Purian Rose threatens Natalie’s life unless Ash votes in favor of Rose’s Law—a law that will send Darklings and other dissenters to a deadly concentration camp known as the Tenth.

When Ash can’t bring himself to trade Natalie’s life for those of millions of Darklings, her fate is sealed. Enter Elijah Theroux, the handsome Bastet boy Natalie once saved from her mother’s labs, where he’d been experimented on and tortured. It was his venom the Sentry used to create the lethal Golden Haze, the heart of the government conspiracy that led to Black City’s uprising and Ash’s rebirth as the Phoenix, the face of the rebellion. Elijah is back and Ash doesn't like him; it’s clear he’s taken with Natalie, and Ash fears she may have feelings for him as well.

But Elijah also may have the answer to taking down Purian Rose for good—a powerful weapon called the Ora. Ash, Natalie and Elijah just have to escape Black City undetected to find it. But fleeing the city and finding this weapon (if it even exists) are easier said than done, and the quest could tear Ash and Natalie apart, even pushing them into the arms of others.

This enthralling sequel to Black City is just as absorbing, delicious and steamy as the first book, leaving readers hungry for the series conclusion.

I don't know what I was expecting when I started this book, but it certainly was not what I got! I remember starting this series, thinking that I wasn't going to be too invested in this series, because it hadn't been a series that I had been dying to read. BUT. I loved Black City, and I really enjoyed this book! As a sequel, it was outstanding, and it functioned really well as a sequel. It sets up beautifully for the finale, Wings.

Ash is the Phoenix, the boy who rose from ashes. But Purian Rose will not let Ash and Natalie get away with leading the rebellion against his government. It's time to vote for or against Rose's Law, and Purian Rose is out to guarantee that the law will pass. And that's what he does - he messes with the elections, and when Rose's Law passes, Purian Rose gives Natalie, Ash, and the rebels seventy-two hours to submit to his control. But Ash and the rebels hit back, obliterating Black City and fleeing to seek a biological weapon that will infect Trackers with the v gene. With the help of Elijah, the Bastet that Natalie freed in book one, Natalie and Ash set out to find the weapon.

I really like the plot of this book - many things happen, and constantly. First we're in Black City, then Destroyer ships, then Natalie and Ash are leaving, and then they're being chased by Lupines and Trackers, and then they're trying to find people from Ash's mother's past. I feel like this book and plot were constantly moving, things were always happening. People died left and right, which was sad, but definitely necessary. Richards gave the ax to so many characters, and she sure knew how to make them count.

This book is a great sequel - it advances the series' plot well, and it has a plot of its own. Find the weapon - that's the plot of this book. BUT, find the way to destroy Purian Rose and his regime - that's the plot of the entire series. This book sets up really well for the conclusion novel, which is exactly what a sequel novel should do. I can't tell you much about the ending of this book, because that will involve spoilers, but let's just say that you'll want Wings really badly once you finish this book. Really REALLY badly.

The romance takes a weird turn in this book. Enter Elijah, the Bastet Darkling that Natalie freed in book one. He definitely has a crush on her from the start, but it turns into more than a crush. And then Natalie finds out something horrible, and she doesn't want to tell Ash, so she confides in Elijah instead. This is bad, because Ash feels like Natalie is pulling away from her, AND he catches her ad Elijah together, alone, in weird situations. So Ash gets jealous, then heartbroken, Natalie is blind to this, and thinks he is grumpy or whatever. Meanwhile, Elijah is enjoying himself and the attention he is getting from Natalie.

Again, the romance is weird. But I'm glad Ash treated Natalie coldly at times - she deserved it. She should have just told him everything as soon as she found out! I'm being vague, I know. It's on purpose. I know all of this sounds like negative stuff, but it was good in a way. It taught Natalie to grow up and really trust Ash. I like Ash a lot. How dare Natalie hurt him!

The romance was the only thing that bothered me - and it wasn't too bad. I liked the flow of this book, the way this book worked with the rest of the series, the writing style (so great!), the characters. I'm definitely NOT a fan of Elijah (I was in the beginning though), so I'm curious as to what his role will be in book three. Book three! Must read immediately!

The romance irked me a little. Natalie was keeping secrets from Ash, and that made Ash suspicious of Natalie - which he was totally within his rights. Natalie kept putting herself in awkward positions with Elijah, and Ash would catch and/or see them together, so what was he supposed to think?! Even though Natalie was relying on Elijah as a friend, Elijah legitimately liked Natalie in that way, so it wasn't all that innocent.

So that bothered me a bit. I like that Natalie got the cold shoulder from Ash though. Ash didn't deserve to not get the truth from Natalie for so long. She should have told him from the start what had happened. But eh, whatever! It didn't bother me too much. I know it will bother other people though.

I would high recommend you read this book! Especially if you loved the first book (or read the first book, not even liked it or anything). This book definitely does not suffer from sequel slump, which is fabulous! The ending will leave readers wanting more, but hey, only a few weeks left until the final book is available! So basically, yes, read it.

And if you haven't read either book, DO IT! Don't miss this series!

4 stars. An interesting, engaging sequel that is definitely worth the read! I cannot wait to read Wings - check back next week for my review of the final book in this series!