Review: Take Back the Skies by Lucy Saxon 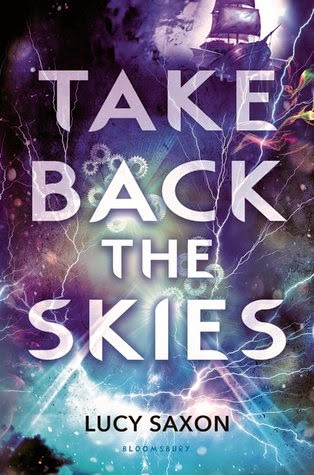 Catherine Hunter is the daughter of a senior government official on the island of Anglya. She’s one of the privileged – she has luxurious clothes, plenty to eat, and is protected from the Collections which have ravaged families throughout the land. But Catherine longs to escape the confines of her life, before her dad can marry her off to a government brat and trap her forever.

So Catherine becomes Cat, pretends to be a kid escaping the Collections, and stows away on the skyship Stormdancer. As they leave Anglya behind and brave the storms that fill the skies around the islands of Tellus, Cat’s world becomes more turbulent than she could ever have imagined, and dangerous secrets unravel her old life once and for all . . .

I really wanted to like this one, you all, I really did. I had such high hopes for this book, because it seemed like a science fiction novel with a hint of dystopian and steampunk elements, and possibly a subtle romance. So many things that I already love, wrapped up in one book? Count me in.

Cat runs away from home after her overbearing and generally horrible father tells her she'll be married to some brutish boy, as a political arrangement. She joins the crew of an airship, initially as a stowaway boy, but eventually, as a girl who is smart and clever. As life on the airship progresses, Cat learns that things aren't as they seem in her country. There is no war, but children are being taken anyway - why? The crew of the airship and Cat intend to find out, and to the stop the government.

I think this book could have been super epic, really, but the execution wasn't the best. The first part of the book was really intriguing, to say the least. I wanted to know more about Cat and her struggle as a high-born society girl, her role in the society, how she handled her father. The tone of the first ten percent of the book is very different from the rest of the book. Cat seem more grown and mature in the first ten percent of the book than she ever will in the rest of the book. I had no idea she was fourteen until she gets on the airship and starts acting like an immature fourteen-year-old. Before that, she does not act fourteen at all.

Personally, I didn't like the plot of this book (see the next section), so I can't say much about that here. Same goes for the romance. Same goes for the majority of the characters, if not all of them. I was pretty interested in what the big secret was - where the Collected kids where taken, and what they were being used to do. I had a feeling what it would be, because it's usually this one specific thing, but Saxon puts a twist on things.

Overall, I'm kind of grasping at straws to find good things to say about this book. It's not 1- or 0-star bad, but it's still pretty not-so-great.

I hate to say it, but there were just so many things that I did not like about this book. The protagonist, the characters in general, the romance, the execution... not very much was to my liking. I'll start with Cat.

To begin with, I had no idea that Cat was fourteen. The first few percent of the novel made it seem like Cat was grown - like, eighteen ish. But when she runs away and stows herself on the ship, it turns out that she is actually fourteen. This is when she starts acting like a fourteen-year-old (*cough* immature *cough*). She literally loses any composure and maturity when she boards the ship - especially upon meeting Fox. Fox is a few years older than her, but he acts too mature for his age. I know that some people can just be THAT mature, but it's weird. It seems weird. And in fact, they don't even act mature most of the time.

To be honest, I think the author did a horrible job of aging the characters. Cat should be like, sixteen or something. Yes, two years makes a difference, a HUGE difference. Fourteen just seems like an adolescent, a kid, an immature brat. At sixteen, the protagonist can be immature still, but not like a child. I don't like Cat's maturity in this book - she acts like a fourteen-year-old, or worse. I also don't really like that she's fourteen - it makes this book read almost like a Middle Grade book. Seriously. I kept asking myself if I were reading an adolescent book, or a Young Adult book.

So there's Cat. I didn't like her in general, by the way. She got on my nerves, and not only because I found her immature. She acted so stupid around Fox, but other times, she acted like she was boss and totally feisty and honestly, it just seemed fake and forced. She did not seem like a person I would like.

The plot. The story itself is, in my opinion, extremely predictable. Even the mystery about the Collected children was predictable to a point. At least it made the book easy to finish - I could tell what was going to happen before it did, and so I could just keep reading. But the story was nothing special. Neither was the worldbuilding, really. This world that Saxon created wasn't anything that I could gush over.

The characters in general match the plot - they were cliche and nothing special. I couldn't connect with any of them, because they seemed very overused and cliche (what's another word for cliche? Ugh). Like, OF COURSE there is that jolly mother-figure who dotes on the boys. That ONE woman. And of course the boys (men, really) of the ship love Cat and take her in and everything is happy snappy. OF COURSE there is Fox, a boy just a few years older than Cat. Like, everyone was overly cliche.

Ugh, the romance. I can't decide if I liked any part of it, or if I basically hated it all. I'm thinking the latter. Fox and Cat's relationship was really, really cliche (I know, I've been using that word too many times). Like, they hate each other, yet secretly, they love each other, and it gets really starry-eyed and mushy-gushy when they get together, as a couple. Like, okay. Might I remind you that she is FOURTEEN. Something about this whole thing bothers me. Called me old-fashioned, but that's just how I feel.

Honestly, this book could have been awesome, but the execution was really poor. This is a very, very young debut author, and it really felt like an inexperienced writer telling a story. This book is pretty long - but a lot of it could have been cut out. I'm not sure why a lot of scenes didn't cut out or edited, but whatever. The execution and writing style was pretty bad. In the first ten percent, I was kind of impressed with the writing. But after that, everything spiraled downwards. Oh, that slippery slope...

Also, someone please explain to me what the title has to do with anything? Taking back the skies? More like taking back the children? I don't understand. It's not a war over the skies. The title was one of the things that initially drew me in - I thought it was going to be an epic war-based adventure type novel, with the skies as the thing in contention. Nope nope nope.

As you can see, I had a lot to say, in terms of what I didn't like. It's unfortunate, because I was super excited to read this book, earlier in the year. Oh well!

No, unfortunately, I would not recommend this book. I can't even see myself reading the next book in the series (which baffles me that there WILL BE a next book - this one wrapped up really tightly). I don't think this one is worth your time, if you already weren't going to read it. If you have it for review, then by all means, read your review books! But don't hurt yourself trying to read this one, if you were not super excited to read it. It's not really worth it, in my humble opinion.

2 stars. I really wanted to like this book. I had such high hopes for it. But alas, that was not the case, and I was disappointed. But I suppose it happens!