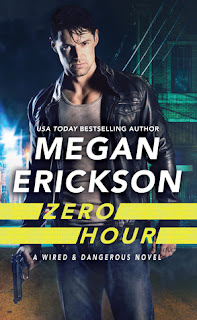 Hacker extraordinaire Roarke Brennan lives each hour - each breath - to avenge his brother's murder. His first move: put together a team of the best coders he knows. They're all brilliant, specialized, and every one an epic pain in his ass. Only now Wren Lee wants in too, threatening to upset their delicate balance. The girl Roarke never allowed himself to want is all grown up with sexy confidence and a dark past ... and she's the wild card he can't control.

Roarke might still think she's a kid, but Wren's been to hell and back. Nothing and nobody can stop her - especially the tatted-up, cocky-as-all-hell hacker. But when years of longing and chemistry collide, Wren and Roarke discover that revenge may be a dish best served blazing hot.

Megan Erickson has quickly become one of my favorite romance authors. I've been reading her books for years, and I can't say I've ever really been disappointed. She produces so many stories and at such great quality, and I am always looking for more. This new series of hers is a thrilling romantic suspense series, with a little more action and blood than her other books, but no less swoony and sexy in terms of the romance. I enjoyed Zero Hour and I am definitely looking forward to reading Darkest Night.

Roarke Brennan wants revenge for his little brother's murder, and he will stop at nothing to get it. So he rounds up a crew of fellow hackers, the best of the bunch: his best friend Erick, who he has known since childhood; Marisol, Jock, Dade Kelly... and Erick's little sister Wren, who pushes herself into the mission, against Roarke's wishes. He wants her safe, but he hasn't known her in ten years, and doesn't know what she is capable of. Wren has her own reasons for wanting to take down the man that had Flynn Brennan murdered, reasons that have nothing to do with Flynn or Roarke or the crew. She has been in love with Roarke for most of her life, but his protectiveness won't stop her from helping the crew. Roarke and Wren are bound to collide, as sparks fly and the stakes intensify.

No one writes a grumpy but lovable hero like Megan Erickson. I adored Roarke from page one and wanted to hug him throughout the book. He is stuck in pain and repressed grief, with a permanent scowl and bags under his eyes. He is a good guy with good intentions, but he is intent on getting revenge. He's a genius hacker and sometimes more robot than human, and sometimes he needs to be reminded of his feelings and emotions. I adore grumpy, protective heroes, and Roarke was not hard to love. He is respectful of boundaries and he doesn't try to control Wren, even though he doesn't want her on the mission.

Wren is a tough lady with a lot to lose and a lot to prove. She knows she is capable of helping the crew, which is why she doesn't back down even when Roarke tells her no. She has been through so much in the past, and she has her own reasons for wanting revenge. I love how open and direct Wren is - especially when it came to Roarke. She saw through his walls and armor and pushed him to communicate and help her understand what was going through his head. I thought it was great to see a heroine who wouldn't take the hero's BS, but also didn't run away or push him away indefinitely.

As a couple, Roarke and Wren really fit together. Roarke is a leader and a great hacker, stoic and aloof and cool. Wren is a risk-taker and she's direct and blunt. There are so many moments of bickering and tension between the pair, and I love some good back-and-forth banter! They had fierce chemistry too, both subtle and obvious. Things heated up between them quickly, though not from page one.

I liked the "best friend's little sister" trope in this book! Roarke had liked Wren since they were kids, and Wren had liked Roarke since then as well, but then Wren went off to college and ten years passed and only now are they seeing each other. There is a smidgen of the whole "forbidden" aspect of their relationship initially, because that's how they each thought of it, when they dreamed of being with the other in high school. BUT I liked that Erick wasn't the reason why they didn't get together in this present time. And when Roarke decided to talk to Erick about things, Erick didn't flip out. This trope actually worked for me!

This is a romantic suspense novel and I really enjoyed the action! Trying to take down the man - or men - that killed Roarke's younger brother comes with its obstacles, that's for sure. It's clear from the ending of the book that that plot isn't quite over, though certain things are resolved. This book is the first of a companion series, so catch Jock's book next!

Overall I am pleased with this book and will be reading Jock's book! I can't wait for his, because I loooove the strong silent types (and Jock is definitely both of those things).

Nothing really specific! I would have loved to meet Fiona (Wren's best friend) in this book, but that's okay. I also wouldn't have minded more steamy interactions from Roarke and Wren. *wink*

If you like romantic suspense, or any of Megan Erickson's previous novels, I highly recommend giving this book a chance! The "hacking" aspect of the book is really light (like, suuuuuper light in terms of terminology), but very important for the plot, but not overwhelming. There is no romance drama (thank you, Megan!), and the ending is fairly wrapped up though you'll be wanting to read book two to catch up with other characters. I know I want book two now!

4 stars. Erickson hasn't disappointed me yet and I'm sure she won't! I hope book two will be just as good or even better. I trust her and I always know what I can expect from her books in terms of romance - very little unnecessary drama! My favorite.