***PREVIOUSLY I GAVE THIS BOOK A 4-STAR RATING. I have since revised my rating to 5 stars. I really enjoyed this book and hope you consider picking it up! *** 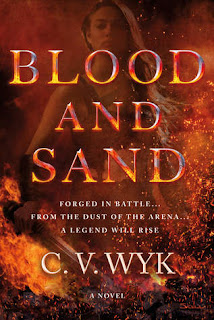 FORGED IN BATTLE...
FROM THE DUST OF THE ARENA...
A LEGEND WILL RISE

The action-packed tale of a 17-year-old warrior princess and a handsome gladiator who dared take on the Roman Republic―and gave rise to the legend of Spartacus...

For teens who love strong female protagonists in their fantasy and historical fiction, Blood and Sand is a stirring, yet poignant tale of two slaves who dared take on an empire by talented debut author C. V. Wyk.

Roma Victrix. The Republic of Rome is on a relentless march to create an empire―an empire built on the backs of the conquered, brought back to Rome as slaves.

Attia was once destined to rule as the queen and swordmaiden of Thrace, the greatest warrior kingdom the world had seen since Sparta. Now she is a slave, given to Xanthus, the Champion of Rome, as a sign of his master’s favor. Enslaved as a child, Xanthus is the preeminent gladiator of his generation.

Against all odds, Attia and Xanthus form a tentative bond. A bond that will spark a rebellion. A rebellion that threatens to bring the Roman Republic to its end―and gives rise to the legend of Spartacus...

Oh my oh my oh my. Blood and Sand, what a debut. I have been eagerly awaiting this book for months, likely close to a year, and I was almost too excited to actually read it when I got a review copy. In the last few weeks, I've been in a terrible reading slump, the worst I've experienced in years. But I think Blood and Sand yanked down and pulled me out of the slump. It is easily a favorite of 2018 already, and I will definitely be rereading it in the future.

This is the fictional story of the rise of Spartacus. Traditionally, Spartacus is known to be a Thracian male warrior, but in this story, Spartacus begins with Attia, the Thracian princess and last of her people. She has been captured and sold to a rich Roman named Timeus, who has gifted her to his Champion of Rome, as a sign of favor. The Champion of Rome, Xanthas, is not what Attia expects; he isn't cruel or forceful, and he's a great deal younger despite his ten years as Champion. Attia should be fighting for every opportunity to escape, to run, to exact her revenge on the man that destroyed her people. But she finds that she cannot leave the Champion, who she finds out is just as much a slave as she is. This is the story of two warriors, brought together under bloody circumstances, but united under the same drive for vengeance.

One thing that was a delightful surprise was the fact that this book is told in dual narrative! There are two third-person POVs - Attia's, and Xanthas's. I adore dual POV and especially when the two characters are each other's love interests. This story is not Attia's; it's not Xanthas's. It's Attia's and Xanthas's.

The story starts with Attia being dragged in chains and sold to the highest bidder. From the start, I liked Attia. She is cold and hardened, undefeated even in chains and branded like livestock. She is a Maedi princess and warrior, and she lets her birthright and training stiffen her spine. She never breaks, she never gives up, and she never loses herself. I love how strong she is, even when she isn't in battle. (Which, let's be real, is like 5% of the book. She isn't fighting much in this one, which was fine by me, given how the story is set up.) And in battle, she is fierce and formidable. I really admire Attia, for her strength and willpower, her determination and her persistence.

Xanthas, I liked just as much or even more. He is the Champion of Rome and has been for years. He has been a gladiator ever since he was a young boy, a slave under the rich man Timeus. He is unbeatable in any arena, against any opponent, or any number of opponents. But he hates how he must kill and how many he must kill. He carries the guilt and pain of every kill, which the author makes very clear, based on his words and actions after a match. He's young, likely around 19 or 20 years old, but he is old beyond his years. He is a good man with a kind heart, despite his warrior status. Not once is he cruel to Attia, or any person (even those he is set against to kill). I really respected and adored Xanthas. Did I mention that he's all sorts of swoony? I mean. Muscles, tall, scruffy facial hair, skills with swords and other weapons, sweet and silent and broody, considerate and thoughtful... he's my type of guy.

Yes, there is romance, and it's so sweet. Attia is given to Xanthas as his prize, so she's supposed to be his concubine or something of that nature. But he never makes her do anything and for that, she begins to trust and like him. They commiserate (they're both slaves who lost their people to Rome), and they're both warriors. The romance is slow-burn and so sweet, and I loved seeing it unfold. I didn't mind how quickly "love" was thrown around because I could see the passage of time even if it wasn't shown directly on the page. There were so many little tender moments (like forehead kisses!) and other more intense swoony moments, and honestly my heart was so invested and so here for it.

The romance is really subtle and barely there, so don't think that the story is entirely about the romance. Xanthas, being the Champion of Rome, is constantly in action, and there is a match coming that he can't wait for. He has been waiting his entire gladiator life for it, and he won't let anything get in his way. Attia is healing from terrible wounds she received in the beginning of the book, but that doesn't mean that she is sitting back, waiting for things to happen. No, she is constantly looking for information on the man that slaughtered her people. And looking for ways to get her revenge.

There are a lot of different parts of the story that change the landscape of the plot, but I won't talk about any of that because that would get into spoiler territory. I will say that the author does such an excellent job with the world-building and history. This is supposed to be loosely based on the story of Spartacus, and of course there are definitely some large inaccuracies present, but I really felt the history of the setting and the characters and the story in general, when reading the book. Based on what I know about ancient Rome, Pompeii, etc., of course.

I wanted to mention some of the secondary characters! I loved the other five gladiators who train with Xanthas. They are his blood-brothers and fellow warriors-in-arms, and they are hilarious. The six of them are a quite a bunch! I love their antics. I also love how, towards the end, the other five develop a sort of kinship with Attia. There was one scene when they were all standing behind her and I swear my face turned into the heart-eyes emoji.

For the record, there is nooooooo love triangle in this book. Or anything non-Xanthas/Attia. Just thought I'd mention that. The other five gladiators - and any other males - are not interested in Attia.

The ending of this book is bananas! On so many different levels! It picks up really quickly and all of a sudden there is an explosion of chaos. I can't even begin to tell you how frantic my brain was working to keep up with everything, because so many bombshells were being dropped. One event in particular is literally the only reason why this book isn't getting five stars from me at this time. Until I know more, that event is sinking this book's rating from me. BUT the ending is wide-open for book two (yes, there is a book two!), which is good! I'm very excited to see where Attia's story goes next, because Spartacus has only just been introduced into the story.

Okay that ONE event is the reason why I waffled with my rating. You'll see what I mean. You all know how I feel about these things. I'm hoping it won't stick, and I have a good feeling that it won't. Cross your fingers!

I highly recommend this book, regardless of if you're a historical fiction fan or not. This book is intense, action-packed, riveting, romantic, and jaw-dropping, in the end. I will say that there is some abuse and suicidal thoughts though not involving Attia or Xanthas (but a secondary character). So be aware of that. But this book is such a powerful one, with a feminist story that isn't loud and obnoxious and over-the-top.

4.5 stars. I've decided to round up to 5 stars! Despite the really painful part of the ending, I loved this book so much and I have a good feeling about the next book. I am so so so excited about Fire and Ash and need that book in my hands now! Or yesterday! This debut is stunning and powerful, and I need more.