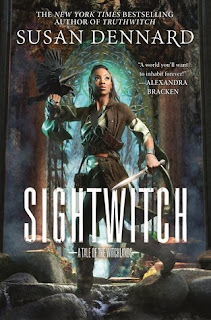 Set a year before Truthwitch, Sightwitch follows Ryber Fortiza, the last Sightwitch Sister as she treks deep underground to rescue her missing best friend. While there, she encounters a young Nubrevnan named Kullen Ikray, who has no memory of who he is or how he wound up inside the mountain. As the two journey ever deeper in search of answers, and as they brave one close call after another, a tentative friendship forms between them—one that might one day grow into something more.

Sightwitch is told through Ryber’s journal entries and her sketches, as well as through supplementary materials (such as other journals, pieces of songs, clippings from history books, flashbacks, etc.). Though meant as a companion novella, this story serves as a set up to Bloodwitch as well as an expansion of the world.

I have a thing about novellas - I don't tend to read them. Novellas are often a little too short, and overpriced, and don't actually add much to the overarching story, the characters, or the series in general. However. When I saw the details of Sightwitch - that it would be a 200+ novella, that it would be published in hardcover, that there would be illustrations - I knew I would be reading this novella. This is basically an almost-novel, given the number of pages, and the fullness of the story. If you're like me and generally avoid novellas, break your rule for once and check out this one!

Sightwitch is an intriguing and heart-stopping addition to the Witchlands series, and it'll leave you wanting to both reread the previous books, and pine for the third book.

This novella is set a year before Truthwitch, and it tells the story of how Ryber became the last Sightwich Sister, and how she met Kullen. All of her Sightwitch Sisters had gone deep underground in the mountain, and she must find them because despite their disappearance being something indicated by the goddess Sirmaya, Ryber knows something is very wrong. She goes into the mountain to find her Sisters, and encounters much more than she ever expected.

Books written in journal-style are typically hit-or-miss for me, but this one was definitely a hit. It's Ryber's diary, and it has entries from Ryber, as well as clippings from textbooks, maps, illustrations, and also entries from Tanzi (Ryber's Threadsister), and Eridysi Gochienka, a famous Sightwitch who lived a thousand years before Ryber. There are ripped pages from essays, the rules of the Sightwitches, and Nubrevnan messages. Everything adds up and makes sense as the story goes on, so this will seem random to someone reading my review, but everything is important to the story.

I liked that there were different POVs, despite the story being told from Ryber's journal. We also see entries from Tanzi in the past, and from Eridysi (a thousand years ago). Both sets of POV are very important to the story, even if they may not seem so at first. Especially Eridysi's - we get so much insight into the lives of Sightwitches, a thousand years before Truthwitch is set. There is a lot of information that expands the world of the Witchlands, by exposing the past of the Sightwitches.

Ryber is the last Sightwitch, and the only one that has yet to be Summoned. But she breaks the rules and goes after her Sightwitch Sisters who were all Summoned into the mountain - but never returned (like they were supposed to, one day after being Summoned). It is in the mountain that she meets Kullen, part of the Nubrevnan crew who washed up nearby in a ship. Kullen has no idea who he is or how he got inside the mountain. Strange, no? It'll make sense by the end of the novella.

I loved Kullen and Ryber's first encounter. Ryber is instantly on her guard and ready for blood, and Kullen is a giant teddy bear who isn't at all dangerous (not that Ryber knew that at first). She doesn't like him at first and doesn't warm up to him, but she can't leave him, no matter how badly she wants to find her Sightwitch Sisters above all else. Though these two meet about halfway into the story, it felt like their relationship started to flesh out really well, from this early point.

I really appreciated the expansion of the Witchlands, the history of the Sightwitchs, the amount of character development and character background we get to see from both Ryber and Kullen. It's amazing how this story is told in journal format and yet it is just as full and complete as a "regular" novel in chapters. Dennard did an excellent job with putting together the story.

All credit to Rhys Davies, the artist of the illustrations in Sightwitch. The illustrations were lovely, and added a different depth to the story. I especially loved the ones of Ryber and Tanzi. There are many different illustrations sprinkled throughout the novella, and they were an added bonus.

While this novella may not be "required reading" for the series, it is a welcome addition and a really great story. I have no complaints. This novella felt very complete and even though it takes place before Truthwitch, I could almost feel it building up the series, which continues with Bloodwitch. I am very ready for book three and hope it and book four comes quicker than expected!

No complaints whatsoever! This was great fiction and a really good stepping stone.

I recommend the series in general, which started off really well (Truthwitch) and soldiered on (Windwitch) and has gotten even more intriguing (Sightwitch). Sightwitch might actually be my favorite installment of the series, perhaps because it is such a simple story, yet it is so complicated in the grand scheme of the series. A novella is never "necessary" to understand the rest of the series, but in some cases (like this one!), it is definitely better to read the novella! I definitely recommend it!

5 stars. Truthwitch was really good, but I think I like Sightwitch the most, of the three books in the series (well, two books and novella). It's definitely worthy of its hardcover status and I really appreciated the length and the illustrations. Susan Dennard, Rhys Davies, and the team at Tor have done an excellent job with this novella!