Review: By a Charm & a Curse by Jaime Questell 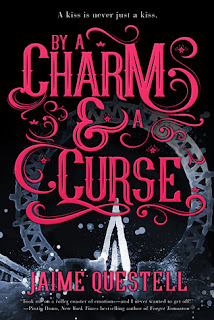 Le Grand’s Carnival Fantastic isn’t like other traveling circuses. It’s bound by a charm, held together by a centuries-old curse, that protects its members from ever growing older or getting hurt. Emmaline King is drawn to the circus like a moth to a flame…and unwittingly recruited into its folds by a mysterious teen boy whose kiss is as cold as ice.

Forced to travel through Texas as the new Girl in the Box, Emmaline is completely trapped. Breaking the curse seems like her only chance at freedom, but with no curse, there’s no charm, either—dooming everyone who calls the Carnival Fantastic home. Including the boy she’s afraid she’s falling for.

Everything—including his life—could end with just one kiss.

Someone needs to help me out here. Before I began reading this book, I went on Goodreads to pull link information to set up my review post, and I saw a slew of two- and three-star reviews, as well as DNF reviews. I respect the reviewers and their opinions, but a lot of the things they were complaining about were... wrong? Several reviewers were mad about "love" being thrown around too quickly; that's hilarious because that word is "thrown around" at the 3/4 mark of the book - nearly two months into the story. Anyway, I'm confused as to why reviews are so negative because I did not have the same experience. The first 5% or so was a little tough to get through, but I was hooked once Emmaline's entrapment began. This debut novel deserves a little more credit because it really was not a bad story at all.

The story begins with Emmaline and her friend Juliet attending the carnival in Claremore, Oklahoma. Emmaline has just moved there with her brothers, to live with their dad, since their mom is doing research in Guatemala. The carnival is magical and enticing, and it's not long before Emmaline gets swept up into the atmosphere. She agrees to hang out with a boy in a jack-in-the-box tent, during his break, and everything falls apart. Suddenly she is now in possession of the carnival's curse, which forces her to stay there and take the boy's place. She is cursed with no sense of touch, and she can only get rid of the curse by transferring it to someone else, just as the boy did to her. Emmaline is forced to travel with the carnival and leave her family behind. It's not just the curse she holds, but the carnival's charm as well. But what if she could break the curse? Will she risk it and doom the carnival - including the carpenter boy she has fallen for?

The first 5% or so was a little slow, and my interest kept fluctuating. It wasn't until Sidney transferring the curse to Emmaline that I really started to get interested in the story. Emmaline is trapped and completely helpless, and no matter how badly she wants to go home, she can't. The rest of the story shows her adjustment (or lack thereof), and how the charm starts to deteriorate for some strange reason... you'll have to read the book to find out why and how.

In the beginning of the story, Emmaline is tentative and a little shy, with low self-esteem and little confidence in herself. It was easy for Sidney to selfishly pass the curse to her, because she was so taken by someone paying attention to her. She is helpless and lost when she realizes her situation, and angry too, but mostly lost. But as the story goes on, she starts to become more resolved to find a solution to her problems - like breaking the curse once and for all. It was nice to see Emmaline grow and strengthen herself, despite her situation. I felt so bad for her, being trapped as she was, but I also liked how selfless she was in never trying to pass the curse to someone else.

This book is told in dual first-person POV, the other person being Benjamin, as narrator. Benjamin is a young carpenter and painter - not a performer in the carnival, but one that does odd jobs and maintenance to keep things flowing. He is kind and clever, and also very stubborn and determined. He wants to reach out to Emmaline from the start, to help her, and he befriends her despite his mother warning him away from Emmaline. Benjamin is a sweet boy with a good heart.

The romance is suuuper slow-burn and really cute. Benjamin and Emmaline don't interact very much when she is first trapped, but Benjamin starts to approach her and is kind to her. He knows she needs a friend and he wants to help her fit in and feel less lonely. The romance goes at a slow pace, but the two develop strong feelings for each other. I personally didn't see insta-love here, ESPECIALLY since they don't really realize the depths of their feelings until about three-fourths of the way into the story - which was about two months since the beginning of the story. A lot of time passes, clearly. Their friendship becomes stronger and deeper, and though they dare not do anything about their feelings, the feelings are there. They don't kiss until the very end of the story. To me there was no insta-love or insta-lust - just a very sweet friendship-turned-romance. Also - no love triangle. It's all Benjamin and Emmaline.

The story focuses on Emmaline's adjustment to becoming the Girl in the Box (who is the most important person to the carnival - she holds the curse, and therefore, the charm). But then things take a sinister turn, with more accidents occurring, and several deaths following. The theory is that the charm is weakening - but how? And why now? I won't spoil anything, but everything goes right down to the end of the book.

The ending, in my opinion, was very good! There was a bit of sadness to it, in terms of some secondary characters, but things worked out in a way. I will say that there is a HEA for the primary characters, but you'll have to read the book to know exactly what kind of HEA it is. I liked it!

I don't think I have any specific complaints, besides the very beginning being slow! I could see some people DNFing the book after a few %, because of the slowness of the story in the beginning. But it's really not that bad. Just keep going!

If you like fiction centered around intriguing carnivals (who doesn't!), I definitely recommend this book! It's not as complex as The Night Circus, but I got some Caraval vibes, though it is VERY different from both The Night Circus and Caraval.

4 stars. I am glad I decided to read this book, despite whatever the Goodreads reviews were saying! Sometimes I look at the reviews and think to myself, y'all didn't pay enough attention. But that happens. I'm glad this story worked for me. By a Charm & a Curse is a sweeping, captivating standalone tale that had me hooked and turning pages until the very end. I am definitely looking forward to more books by Jaime Questell!