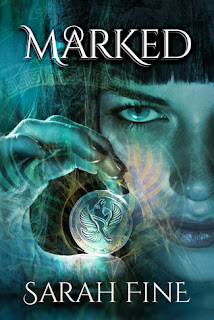 In a broken landscape carved by environmental collapse, Boston paramedic Cacia Ferry risks life and limb on the front lines of a fragile and dangerous city. What most don’t know—including her sexy new partner, Eli Margolis—is that while Cacy works to save lives, she has another job ferrying the dead to the Afterlife. Once humans are “Marked” by Fate, the powerful Ferrys are called to escort the vulnerable souls to either eternal bliss or unending fire and pain.

Unaware of Cacy’s other life, Eli finds himself as mesmerized by his fierce and beautiful partner as he is mistrustful of the influential Ferry clan led by the Charon—who happens to be Cacy’s father. Cacy, in turn, can no longer deny her intense attraction to the mysterious ex-Ranger with a haunted past. But just as their relationship heats up, an apparent hit takes the Charon before his time. Shaken to the core, Cacy pursues the rogue element who has seized the reins of Fate, only to discover that Eli has a devastating secret of his own. Not knowing whom to trust, what will Cacy have to sacrifice to protect Eli—and to make sure humanity’s future is secure?

I've had this book on my TBR shelf for ages! Everyone who knows me knows that I LOVE Sarah Fine's books - I've read Sanctum, Fractured, Chaos, Of Metal and Wishes, and Scan, with Of Dreams and Rust, Burn, and Claimed in my possession to be read. Fine could write an amendment to a bill in Congress and I'd read it. I've been meaning to read this particular book for a long time, and so when Pili told me to send it up the TBR list, I took that as a sign. So, this is my June Pili-Pushed recommendation!

Cacy has a new partner, and she's not too happy about it. Eli is from Pittsburgh, where he grew up in a town with little water, and from a poor family. Meanwhile, Cacy's family reeks of money, and she's not all that she appears to be. As a Ferry, she guides souls to Heaven or Hell. Her father was the Charon - until he retired, and was murdered. Eli has no idea about the supernatural life that is right in front of him. But the attraction between Eli and Cacy burns, and it's not long before Eli is inextricably drawn into the chaos, his life entwined with the Ferrys'.

I knew I would like this book, and Sarah Fine did not disappoint! Her first published adult novel - magnificent. The world-building is splendid! This book has some Greek basis, as Cacy and her family are Ferrys, and there is a presiding Charon. There are Kere, who Mark souls that need to die. There are Shades, people who die and have not been guided to Heaven or Hell. Sarah Fine always does an amazing job of setting up the world and the characters and the setting.

I really like Eli! He surprised me towards the end, as his character got really complex and twisted. I like that the author hid things from the reader about Eli, until towards the climax. I was shocked to learn some things about Eli! But certain things made sense. Eli is a good guy, loyal to his older sister Galena, as well as Cacy, even when he first meets her. He is a sweetie!

Cacy is a tough girl, even though her family treats her like the little sister. The youngest of four, she definitely gets babied, and she gets a lot of crap for not joining the family's business (their business in the human world, not the Ferry business), instead becoming a paramedic. Cacy is human, and she is a Ferry. She has a temper and she's a bit sarcastic, but she is a likable character. Her character development is highly evident from start to finish. As was Eli's!

I LOVE the romance! Cacy doesn't necessarily like Eli at first, though she doesn't hate him either. She sees him as a new paramedic partner - a hot one, at that. Eli is attracted to her pretty much on sight (with good reason, since he walked in on her changing). The attraction simmers between the two, and then feelings come into play, and I love how Eli and Cacy get along and push each other and then get along again. The romance is lovely to watch unfold, and the chemistry between the characters is also a pleasure to read (hehehe pun intended).

I really like the story! At first it starts off simple... Ferrys guide souls, enter clueless human who falls for a Ferry (and she falls for him too). But then the Charon - Cacy's father - is murdered (this isn't a spoiler, look at the synopsis), and things get crazy. Someone starts to target Eli, and Cacy and Eli are desperate to find out who killed the Charon, if there is a Kere behind it all. Jason Moros, the Lord of the Kere, will have some explaining to do.

In the end, I absolutely adored this book. I believe this is urban fantasy, and it's a really great urban fantasy novel. It's an adult novel, especially in terms of the romance, and it's a good one!

At first, there was something that was bothering me... but after talking to Pili, my issue is resolved and I am quite satisfied!

Anyone who loves adult romance novels should read this one! Or urban fantasy. Or Sarah Fine. It's heavily adult, which I love, but be mindful of this, young readers! It's a fantastic urban fantasy novel with unique and original world-building, and I would recommend this one to pretty much any adult-novel reader, to be honest!

4 stars. I knew I would be reading this series in the future, but I thank Pili for pushing it to near future instead of far away future! I have Claimed on the queue for my July Pili-Pushed recommendation, so stay tuned for that review!