Review: This Night So Dark by Amie Kaufman and Meagan Spooner 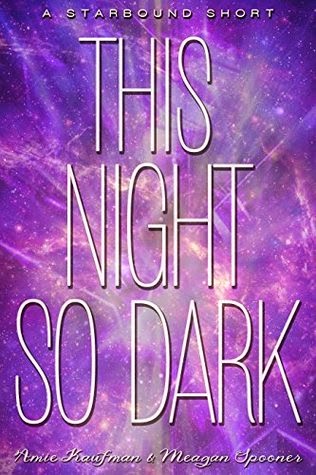 Don’t miss the breathtaking short story that connects the first two novels in the Starbound trilogy, These Broken Stars and This Shattered World. Tarver still has nightmares about the night, six months before the Icarus crash, when he rescued a group of civilian researchers being held hostage by brutal mercenaries. Now Tarver and Lilac must reconcile his memories of that fateful night with the truth that they uncovered on a mysterious planet after the Icarus crashed. Includes a bonus preview chapter from This Shattered World.

If you've been regularly following my blog, you'll know that I've read and LOVED These Broken Stars and This Shattered World. Seriously, this series is fabulous, and it's got covers to match. Now, this novella. I'd already read books one and two, and I usually don't like novellas... but as I said, I love the series, and hey, the novella was free. Still is. So, what did I have to love?

This novella is a short story - it tells the story of how Tarver became a hero, when he was held by mercenaries and miraculously escaped with other hostages. The story itself is less than half of the ebook - the other half is the beginning of book one, and a preview of book two (both of which I'd already read).

Like with most novellas, this one wasn't NECESSARY to read, in order to know the story in books one and two. I can freely say this because I've read books one and two, before reading this novella. It definitely does help, to see how Tarver became so highly honored in the military.

The story is pretty intense, and I won't go into the specifics (it's so short, you could read it yourself!). Kaufman and Spooner manage to pack in a complete story in a very small space, which is awesome. Seriously, there were some plot twists that threw me in the beginning, and the ending rushed at me very quickly (in a good way). Very well done!

Lilac is present in this story - Tarver was having nightmares about this night, and she wakes him, so he tells her about it. At the beginning of every chapter, we get Tarver telling Lilac something about the memory (present), and then Tarver and the hostage situation (in the past). There is something crucial that Tarver tells Lilac in this book, something that Tarver doesn't realize in the first book. It's not necessary to read this book to know the thing, because it's taken care of in book two, but I like how all arrows are pointing in the same direction. So to speak.

As you can tell, I liked this novella! For someone who doesn't like to read too many of these, I liked it a lot.

It was so short! Not even half of the ebook! But then, it is billed as a short story. Waahh, I so wanted more. In a good way!

Even though I don't like novellas (too short, too expensive, too unnecessary), I would definitely say that this one is worth the time! And it's free, so, why not. Also, I recommend this series in general.

4 stars. Now, back to wanting book three... it will be a long wait, especially since I read This Shattered World back in June!