Review: An Heiress For All Seasons by Sophie Jordan 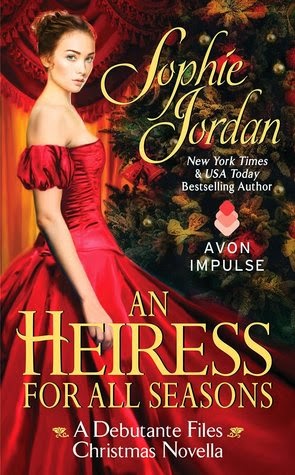 When a holiday blizzard brings together a pair of reluctant lovers, the result threatens their reputations … and may cost them their hearts.

Feisty and independent American heiress Violet Howard swears she'll never wed a crusty British aristocrat. Will, the Earl of Moreton, is determined to salvage his family's fortune without succumbing to a marriage of convenience.

But when a snowstorm leaves Violet and Will stranded and alone, their sudden chemistry will challenge good intentions. Seized by a desire that burns through the night, they'll toss reservations aside in favor of the heat found in each other's arms.

Will their passion survive the storm? Will they realize they've found a love to last them through all seasons?

This story was so cute! I love holiday stories... around the holidays though. You won't catch me reading Christmas stories three to four months before Christmas. This story is definitely a great one to read for the holidays, if you enjoy historical romance stories! Especially since it's a novella (so it's pretty short), and it's by Sophie Jordan (so it's pretty much guaranteed to be awesome). Jordan's historical romance novels are great.

Violet is an American heiress who has been dragged to London by her mother. Her mother wants her to marry a nobleman. Will is an Earl, but his family is in dire straits. Violet is certain that he is only interested in her because of her wealth. But Will wants more from her, and he is determined to have her. A storm blows in, along with another suitor for Will. The pair will have to find their way to each other the hard way, it seems...

I'm not entirely used to historical romance novels that have an heiress heroine and a titled but poor hero. Or American heroines, for that matter. I liked Violet a lot! She wasn't completely suckered by Will, but at the same time, she definitely felt the attraction and chemistry between them.

Will is a REALLY likable character. He's a bit uptight at first, and he's very protective, and I really like him. He doesn't give up with Violet, and he doesn't act like he only wants her money. He is kind and patient and sensible... and really yummy. Ha.

This book is really short so I don't want to go into too much detail, but I really liked the story. It felt very complete, for such a short amount of space. I could feel the progression of the romance - it didn't feel too insta-love-y or quite. I really enjoyed this novella!

I wanted a smidgen more from the ending. I wanted specifics. The ending wraps up in a speech, in which the characters sort of talk about what they will do (or one does, in a declaration/speech thing). I wanted more! Like, a XXX-years later epilogue or something! But that's okay.

If you have enjoyed Sophie Jordan's other historical romance novels, you will definitely enjoy this one! This series is pretty great. We do get mention of two characters from the last novel, which is pretty cool!

4 stars. A lovely holiday novella to put you in the mood! If you enjoy historical romance novels, definitely give this book/series/author a shot!