Review: The Duke of Dark Desires by Miranda Neville 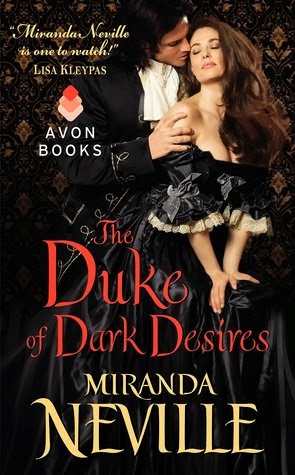 Rebellious Julian Fortescue never expected to inherit a dukedom, nor to find himself guardian to three young half-sisters. Now in the market for a governess, he lays eyes on Jane Grey and knows immediately she is qualified—to become his mistress. Yet the alluring woman appears impervious to him. Somehow Julian must find a way to make her succumb to temptation . . . without losing his heart and revealing the haunting mistakes of his past.

Desired: Duke skilled in the seductive art of conversation . . .

Lady Jeanne de Falleron didn't seek a position as a governess simply to fall into bed with the Duke of Denford. Under the alias of Jane Grey, she must learn which of the duke's relatives is responsible for the death of her family—and take her revenge. She certainly can't afford the distraction of her darkly irresistible employer, or the smoldering desire he ignites within her.

But as Jane discovers more clues about the villain she seeks, she's faced with a possibility more disturbing than her growing feelings for Julian: What will she do if the man she loves is also the man she's sworn to kill?

Well, this book wasn't quite what I expected. It was so much more than whatever I thought it would be. I love lord/governess stories (though I feel like there aren't many), so I couldn't wait to dig into this romance. As many of you know, I didn't really like The Ruin of a Rogue (book two of this series). This one (book four) caught my attention because of the lord/governess thing. But there was so much more to this book!

Jane Grey isn't a governess - she is a French aristocrat, fallen from grace. Everyone believes that she and her family are dead, murdered nine years ago when an English lord betrayed them, stole expensive paintings from them, and left them to hang. She has known for years that a Mr. Fortescue was behind it all... potentially the same Duke of Denford, Julian Fortescue, her new employer. Jane has every intention of getting her revenge, but she doesn't expect to fall in love with the man...

Ahhh, this book was so complex! It's not just a romance novel. There is so much scheming and betrayal and even politics in this book, it's fabulous. I didn't like a lot of things about The Ruin of a Rogue, but I'm glad I wasn't deterred by that novel. The complexity and depth of this novel was fascinating!

Jane is the model of a perfect governess. She schools Julian's three half-sisters into proper ladies, all while keeping up pretenses that she is an Englishwoman from St. Lucia, with an excellent reference and a mysterious past. I really like Jane! She is direct and forward and proper and ladylike. She has no problem telling Julian exactly how she thinks things should be done, but it's not done in a stuffy or bossy or annoying way.

I like Julian a lot. That man is sinful, but he is also sweet and kindhearted. At first, it seems like he's kind of a meanie, because he doesn't want to take in his three half-sisters as his mother and her latest husband gallivant across the globe. Honestly, I feel for him, and understand. But he slowly begins to really like his sisters. I love seeing this progression. I also love seeing him fall for Miss Grey.

The romance is fabulously slow-burn. It's all sorts of wrong, for the duke and his governess to be doing anything improper, but Julian knows no boundaries, and Jane has no honor to lose. She wants to kill him, anyway, but she also wants to kiss him. Tough decision...

I thought I would be constantly annoyed by Julian's younger half-sisters, but I really liked them! The oldest is fifteen, the youngest is... seven? Nine? Somewhere around there. The author does a really great job of making sure that readers really like the girls, in addition to Julian and Jane.

I won't go too deep into Jane's past and the huge conflict that made her go after the Fortescue family and how everything comes down to her and Julian. But trust me, it gets twisted. And intriguing! I really liked how much bigger it was than Jane's family and Julian's family. There was a country involved, in a time of war. You really have to read the book to know what I mean!

Overall, I really enjoyed this book! The characters were really likable, the chemistry was sizzling, and the mystery/story was captivating.

The cover. Haha. Not that the author can do anything about that. But anyway - I wanted one or two scenes more between Julian and Jane...

4 stars. I haven't read books one or three of the series, but I'm glad I read two of the four books! This last book is probably the best (in my opinion).