Review: The Treachery of Beautiful Things by Ruth Frances Long 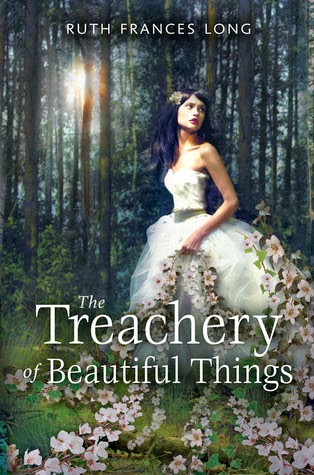 A darkly compelling mix of romance, fairy tale, and suspense from a new voice in teen fiction

The trees swallowed her brother whole, and Jenny was there to see it. Now seventeen, she revisits the woods where Tom was taken, resolving to say good-bye at last. Instead, she's lured into the trees, where she finds strange and dangerous creatures who seem to consider her the threat. Among them is Jack, mercurial and magnetic, with secrets of his own. Determined to find her brother, with or without Jack's help, Jenny struggles to navigate a faerie world where stunning beauty masks some of the most treacherous evils, and she's faced with a choice between salvation or sacrifice--and not just her own.

I have had this book for ages! Literally since Christmas 2012, when one of my best friends gave it to me that year. I've been meaning to read it since then, even before then, but never brought myself to it. Luckily, Pili pushed this one on me, so it's my Pili-Pushed recommendation of November. To see my reviews of other Pili-Pushed recommendations, see the "Pili Pushed" tag!

Jenny's brother was taken seven years ago... by the forest. Seven years later, Jenny is determined to find him. She enters the forest, and finds a world so unlike her own. The Fae live in this Realm, as in, Queen Titania/Mab, Oberon, Puck... and Jack, the Jack o' the Forest. Jack is the guardian of the Edge, and he is charged with helping those on a quest (which is Jenny). But Jenny quickly learns that the Fae world is treacherous and dangerous, but she will stop at nothing to get her brother back.

I usually don't like books that involve the Fae/faeries... but how much did I love this book? Let me count the ways. I really enjoyed the Fae aspect of this book! It's much like what I personally think of, when I think of the Fae. Like, the Shakespeare stuff, with wicked, tricksy faeries. Oberon, Titania, Mab, Puck... they're all very present in this book, and very much like they came from a Shakespeare play. I really, really liked this!

This book is written in third person, and this really worked for me. I still connected with Jenny, though in the beginning, she seemed a little distant. Most scenes are exclusively Jenny's, but there are some that feature only Jack. Personally, I'm a huge fan of Jack.

Jack is the guardian of the edge, so he watches the border between the human world and the Fae world. He serves Oberon, but he also answers to Titania (everyone does). There is so much mystery surrounding Jack, and we don't get to know everything at once. I love how Long feeds us information about Jack, bit by bit. Definitely made me love him slowly but surely, more and more.

There IS romance in this book, yay! Jenny doesn't go into the forest looking for love - she's hunting for her brother. And Jack - he's been around for a while, doing his job, trying to find a way out of his curse... he doesn't expect or want to fall for anyone. Jack has to save Jenny on many occasions, and eventually, he realizes just how much he's grown to care about her.

I thought the romance was really sweet and slow-burn... definitely one of my favorite structures of a romance in fiction. Love!

The story was so fascinating and dark and intriguing. I love Long's storytelling, her prose, her way with words. This story wasn't just about Jenny finding her brother - it was about Jack and his curse, the Fae world and their tyrant. It's a standalone novel, so it wraps up at the end. The ending is fabulous. So beautiful, and not too perfect. Okay, it was perfect, in a warm, lovely way. Ah!

I wanted a little more from the story before Jack has to rescue Jenny from the Nix (you'll have to read the book to know what I mean - and I promise, this isn't a spoiler). This occurs about halfway through the book, but it also takes a good portion of the book, for Jack to rescue her, and then we haven't even reached the climax. I wanted a little more journey, trampling through the forest, that kind of thing. Just a small thing!

I seriously loved this book - a fantasy novel set in the modern world - and I would totally recommend it. Especially for the romance, it's one of my favorites. Love!

4 stars. I can't believe I waited this long to read the book! It's been sitting in my room... innocently... for nearly two years. Shame on me for doing that! I really liked this book.