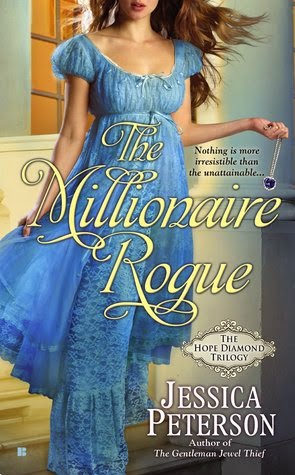 In an age of stately decorum, the Hope Diamond was a source of delicious intrigue—and a font of unimaginable adventure…

Though not of noble birth, Thomas Hope has a skill in banking that’s made him one of the richest, most trusted men in London. Still, he keeps his dubious past hidden. So when an old acquaintance calls on Hope to help acquire the infamous French Blue Diamond, he’s desperate to be discreet. He never expects that his biggest concern shouldn’t be losing his reputation, but his heart…

Sophia Blaise is determined to make a brilliant match with this season’s most eligible, most titled bachelor, but her true passion has been ignited by the incredible stories she hears while secretly transcribing the memoirs of a notorious Madam. After a night of clandestine writing ends with Sophia caught up in a scandalous adventure of her own—with an alluring banker—she begins to question whether she’s suited to the proper life she’s always known…

Caught up in a thrilling exploit and unexpected romance, Sophia must make a choice between what her head knows is safe and what her heart desperately desires, before both slip from her grasp forever…

First, my thanks to the author, who contacted me directly to see if I would review her book. I've been taking little to no review requests for the better part of this year, but this request caught my attention. The author was very kind and professional, and expected nothing less than an honest review. Me enjoying the book was an added bonus!

What a lovely historical romance novel this was! I've not read this author debut novel, so I was not quite familiar with this book (or series, or even author). I'm glad it didn't fly under my radar - I'm always looking for new historical romance authors. Definitely adding Peterson to the list!

Thomas Hope has his sights set on the French Blue, a large diamond that is currently in the hands of the Princess of Wales. Fate would have him and Sophia Blaise pair up to obtain the diamond from the Princess... only for the diamond to be stolen at a ball. Sophia, Thomas, and several other important people work together to get the diamond back into the right hands.

It doesn't seem like this book is a romance novel at all, does it? No scandalously revealing cover, only one person on the cover, fully clothed, no sexy title, and once you read the book... the plot is so involved in the mystery and the hunt for the diamond. Don't get me wrong, the romance is alive and present and totally sizzling. But the mystery, the whodunit, seems to eclipse the romance, which I really liked!

I really liked Thomas Hope. He's an untitled gentleman, a banker who did really well for himself. He's not a scoundrel or a seducer, and he's a tiny bit awkward under all that healthy macho manliness. I like him a lot! He feels like he doesn't deserve a lady like Sophia, because he's just a banker, but he's so wrong - he's quite the catch.

I also really liked Sophia. She's very bold and brazen in a reserved way. Like, she's so used to a snobby life, to the expectation that she will marry a rich, titled man, and live in a castle on a hill. But she wants passion and color in life, and not a dull, boring existence. I liked Sophia. She didn't fight her attraction for Thomas at all, despite being a debutante (and therefore, a virgin).

Ooo, the romance. Thomas and Sophia sizzle right off the page, despite Thomas avoiding women for some time now, and Sophia being a virgin. The two of them click instantly, at least physically. Sophia has Thomas wrapped around her finger by the end of the book, even though she convinces herself that that isn't what she wants. She should do her daughterly duty, right...

The mystery was pretty interesting, and it took up much of the book. At first I thought things were a little overwhelming, like there were a lot of little things going on. But as I kept reading, I could see how the subplots intersected with the main plots.

The ending was really nice - everything wrapped up nicely, almost too neatly, but I liked it. I liked how the author left things with Thomas and Sophia, as well as with the French Blue. I was definitely sucked into the mystery, and didn't see it coming from early on, which is always a plus with a good mystery!

The only thing that really stuck out to me was the constant switching of how the author referred to Thomas Hope - not in the dialogue. It varied from "Hope", to "Mr. Hope" to "Thomas"... sometimes on the same page, we would see at least two of those. I'm used to a sort of consistency with names/titles/etc., so I was hoping that this would be more consistent. This wasn't a problem with Sophia - she was always "Sophia" in the exposition, and not "Miss Blaise" or something.

Other than that, no serious complaints!

This is definitely a smart, interesting historical romance with a sizzling romance! It's hard to find that combination in historical romance novels. A lot of them are heavily romance-driven (which is great!), but I like the ones that deviate from this expectation. So, yes, I would recommend this novel!

4 stars. An excellent novel by this rising historical romance author! I definitely hope to catch the next book in this series - especially after previewing the story in the back of this ARC! I'm intrigued by Peterson's choice of characters for the next book... though I can't say I'm surprised.