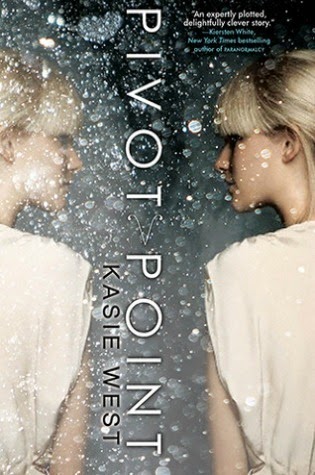 Addison Coleman’s life is one big “What if?” As a Searcher, whenever Addie is faced with a choice, she can look into the future and see both outcomes. It’s the ultimate insurance plan against disaster. Or so she thought. When Addie’s parents ambush her with the news of their divorce, she has to pick who she wants to live with—her father, who is leaving the paranormal compound to live among the “Norms,” or her mother, who is staying in the life Addie has always known. Addie loves her life just as it is, so her answer should be easy. One Search six weeks into the future proves it’s not.

In one potential future, Addie is adjusting to life outside the Compound as the new girl in a Norm high school where she meets Trevor, a cute, sensitive artist who understands her. In the other path, Addie is being pursued by the hottest guy in school—but she never wanted to be a quarterback’s girlfriend. When Addie’s father is asked to consult on a murder in the Compound, she’s unwittingly drawn into a dangerous game that threatens everything she holds dear. With love and loss in both lives, it all comes down to which reality she’s willing to live through . . . and who she can’t live without.

Well, after months and months - actually, years - of pushing this book off, I've finally read Kasie West's debut novel! I got this book in December 2012 (I actually won it from Jennifer, so, thank you, Jennifer!). I kind of saw a spoiler about the ending, and that ruined the book for me. A year and a half later, my friend Pili insisted that I read this book, as my "Pili-Pushed" book recommendation of the month. Guess what, you all? I LOVED THIS BOOK!!

I think it was the motivation from reading and loving one of West's other books that really solidified my intentions of reading this book once and for all. As many of you know, I read my first West book - On the Fence - and really loved it. I have no doubt that I will enjoy Split Second and The Distance Between Us, now that I've really enjoyed two of West's four published books.

Addie has the ability to Search decisions in her future. She can explore the two paths of that decision in the future, and then choose which path is favorable to her. Like, whether or not to turn down Bobby's invitation to the dance. Or... which parent to live with, when they decide that they need to get a divorce. With Mom, who is staying inside the Compound (for paranormals), or with Dad, who is leaving the Compound to live in the Norm world. So, Addie decides to Search her future of both paths. This book is entirely that - a flip-flop between one path and the other.

At first, I was confused. The very beginning is present time, in which Addie's parents tell her that they're getting a divorce. Addie's friend Laila convinces Addie to Search her future, and Addie does so, for six weeks in the future. This book alternates between Addie's life with her mother (in the Compound), and her life with father (outside of the Compound). Each chapter alternates between the two different paths.

There are two paths, two parents, two lives, two boys... I actually really liked this type of hypothetical story. This entire book is hypothetical, and Addie must choose a path, once her six weeks in the future is over (for the real world, real time, it's like, five minutes of a Search). I liked the alternating chapters. I ESPECIALLY loved seeing the paths getting closer and closer... until they finally intersected. Of course, one path couldn't directly overlap and leak over. But it was so cool to see one scene in two different paths.

I love how West weaves a good story and mystery in this book. It isn't just about what Addie's life will be in each path. Addie must assimilate to the human world in one path, or get used to being a golden-buy, footballer's girlfriend in another. But there is something eerie about both futures. Something doesn't add up, and it's not just the football. Trust me, you'll get it when you read the book.

In the path with Addie living with her mother, Addie develops a relationship with Duke, the Compound's star quarterback, and eventually, they start dating. The very first scene of the book features Duke. Duke is persistent and patient, terrible and hilarious. I liked him from cover to cover, despite some things that should have made me hate him.

In the path with Addie living with her father, Addie develops a friendship with Trevor, a former quarterback for the high school Addie attends. They develop feelings for each other, but Addie pushes them down, knowing that she can't tell Trevor who she really is, that she can't really be herself with him. Living in the human world is a really difficult adjustment for Addie, and she almost blows her cover many times. Anyway. I really liked Trevor. His relationship with Addie seemed more real to me, than Duke's relationship with Addie.

And I like Addie. She's a lot like me, or we're a lot like each other, whatever. I guess that makes me a too-good girl, which is fine. Maybe hot quarterbacks will drool over me and my wonderfully good self. Actually, I'm hoping it will be sexy center forwards. Or any soccer player, for that matter. Anyway.

So I'm really excited to read the next book! This book ended with Addie coming out of the Search, and choosing a path... I won't tell you which path she chose. The six weeks that Addie lived in the Search ARE included in this book too, but since we already know what happened in that path, West doesn't repeat it all. It's the epilogue, which was smart. Now, book two! I want to read about the aftermath!

Usually, I would say the love triangle, because there IS one girl and two guys interested in the one girl... but there really isn't a love triangle. I won't say anymore. But remember, this is coming from the girl who HATES love triangles.

I would most definitely recommend this book! If you've read any of West's books, then you KNOW. If you haven't read any, read ALL OF THEM. You won't regret it. This one is paranormal - it reminded me a lot of Natalie Whipple's Transparent (although, Transparent came out after Pivot Point. I read Transparent first though.), with the girl having superhuman abilities and living in the "real" world. This is a great paranormal novel!

4 stars. I really should have read this book sooner, and not paid attention to what I read about the ending! Of course, what I read was true, but I shouldn't have let it ruin the book for me. Check out my review of book two, Split Second, next Friday (August 1st)!